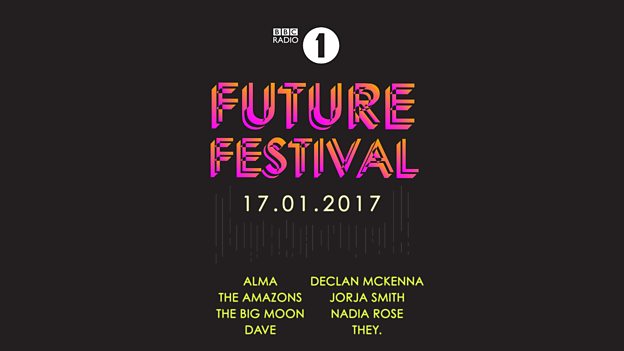 BBC Radio 1’s Future Festival is to return in 2017, a three hour broadcast showcasing some of the best new musical talent for 2017.

BBC Radio 1’s Future Festival is to return in 2017, a three hour broadcast showcasing some of the best new musical talent for 2017.

Taking place on Tuesday 17 January, the broadcast will take the form of a three hour show presented by Radio 1’s MistaJam and Huw Stephens and feature performances from some of the most hotly tipped new acts.

Alma, The Amazons, The Big Moon, Dave, Declan McKenna, Jorja Smith, Nadia Rose and THEY are among the artists performing.

Commenting, MistaJam said: ‘This year's Future Festival line-up features some of the most exciting and diverse new artists from around the world that have been championed across BBC Radio 1's specialist output for some time, all destined to break out in 2017.

‘From the neon pop/R&B of Alma to the straight-up rock of The Amazons via the South London street tales of Dave, be prepared to be introduced to your new favourite act.’

Huw Stephens added: ‘Once again we've got some brilliant artists ready to play live for the Radio 1 listeners at the start of this year. With bands like The Big Moon and The Amazons who've been gigging hard for the last year, to super talented emcees like Dave and Nadia Rose, it's going to be a great night. And all in the legendary BBC Maida Vale studios, unrivalled around the world!’

The Amazons say: 'Thanks to BBC and Radio 1 for inviting us to play Future Festival. We've had the pleasure of doing a session for Huw at Maida Vale before but this time it's in front of an audience! We can't wait!'

Radio 1’s Future Festival is the go-to show for hearing the most exciting new artists tipped for big things in the coming year.

Ticket registration is open until 8pm on Thursday 12 January.