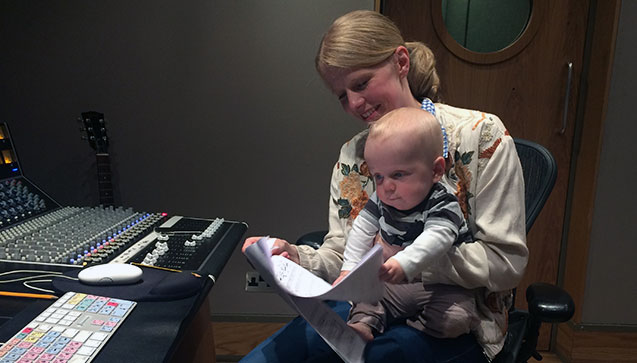 Laura Marling, Coldplay and Bond composer David Arnold are among the signatories of an open letter calling for the extension of shared parental pay benefits to the self-employed.

Laura Marling, Coldplay and Bond composer David Arnold are among the signatories of an open letter calling for the extension of shared parental pay benefits to the self-employed.

They joined members of Keane, composer Stephen Warbeck, film director Tim Burton and more than 30 MPs, who say the existing Maternity Allowance places the burden of childcare on women.

The letter, supported by the Music Producers Guild (MPG) and UK Music, also points out that self-employed fathers are currently entitled to nothing.

Parental Pay Equality, the campaign group behind the action, is the brainchild of award-winning sound engineer, Olga FitzRoy, pictured above with her son.

FitzRoy said: ‘The current regulations are based on the fifties model of the family where the mother does all the caring.

‘In the creative industries 44 percent are self-employed and most of us love our jobs – we don’t want to choose between family and career, and with shared parental pay we wouldn’t have to.

‘It would be paid at exactly the same rate as maternity allowance for the same no of weeks, but parents could share the leave flexibly and women’s careers would suffer less, while new dads and adopters, who currently get nothing, could bond with their kids. Everyone’s a winner and we envisage the cost to be minimal.’

She added: ‘Our research shows 54 percent women’s businesses suffered as a result of not being able to share leave - surely the time has come for change.’

Leaders of entertainment unions BECTU, the Musicians Union and Equity have also signed the letter, as well as the Federation of Small Businesses and a number of charities.