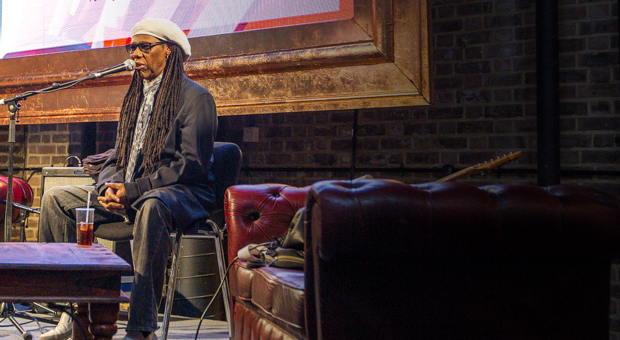 ‘I have a total blast when I’m making records’ - we find out how Chic’s Nile Rodgers became a songwriting star...

‘I learned all I know about composition from talking to other people’, said Chic guitarist and songwriter Nile Rodgers during his marathon three hour conversation at the second London Electronic Arts Festival (aka LEAF).

From his opening panel at last week’s event, it’s clear that communication is essential to the acclaimed songwriter and artist.

His talk, billed as Nile Rodgers: Unmoderated, Uncensored and Unlimited, featured just him and his guitar (the ‘hitmaker’), yet there were no let ups in energy, enthusiasm or quality of conversation. Topics veered from his love for synthesisers and the music of the Silver Apples to genuinely heart rendering moments when talking of his friendship with former songwriting partner Bernard Edwards.

Although Nile covered many topics during the three hours, we sat rapt for the duration - here's what we learned about his songwriting success (although he himself was keen to say 'don't take any of this shit as gospel!)...

I try and have as much fun as possible because I believe in the music industry stats. They say that most music isn’t ever gonna recoup, it’ll probably flop. So I want to make it fun so we can keep going and going, then hopefully at some point we’ll have a hit. If the process isn’t fun, and you’re failing to get hits, then damn that sucks!

Be willing to collaborate with anyone

Writing music is all about adapting to the situation. I always say I’m just as comfortable as working with New York Philharmonic as I would be with Basement Jaxx.

And be open to learning when collaborating

I always want to learn from collaborators so over the course of my songwriting life, I get smarter. I’ve learnt a lot from different musicians. It’s not compromising, it’s about learning.

If you’re confident and have something that a collaborator doesn’t have, then they’ll be impressed too. It’s a give and take. If you respect people and remember that others want to learn, then you’ll be good.

If you have a block, move on to something else. If someone wasn’t functioning when we were recording as Chic, we’d stop the session and go to the movies. If you’re struggling with a part or not in the groove with the rest of the band, then stop, go have dinner, play video games. Forcing it makes it become work and it doesn’t groove.

All the Daft Punk stuff was done in a matter of hours. I went in all focused and up for having fun. Afterwards they pulled everyone together and said do it like him. It changed everything as before that they’d be working on the record for eight years. It meant they were able to finish the record.

Hits are hard to predict

We were really surprised by the success of Get Lucky. We thought Lose Yourself To Dance would be the hit and that’s why it has the amazing video.

I have loads of record lying around lost that I thought would be the bomb. But I wasn’t in sync with the public and your record label isn’t in sync with you as an artist. With Random Access Memories, the label went old school with their marketing. They were going to treat the world as if the internet didn’t exist. That caught people off guard, caught attention and got the record played.

Music is not perfect

Music is not perfect - it’s malleable and changes all the time. Great DJs judge how to play the next record from the crowd. I’m doing that all the time when I’m writing and playing songs.

You learn a part, play it bit and interpret it over the course of the composition.

‘Don’t bore us, get to the chorus’

I start all my songs with the chorus. It’s certainly not the way most people do it. But we always wanted to grab attention straight away. They were far few opps for black artists to be heard on American radio when we started. We always wanted to make sure our records got added to the playlist, which is why every Chic song starts with something interesting at the start.

Listen to others and make your own twist on it

Everything we do is derivative. The great composer Verdi said good composers borrow, great composers steal. I am affected by other people’s work, but I then try and disassociate myself by writing around it. Good Times was my version of Hollywood Swinging by Kool and the Gang.

Do it because you love music

If you go out looking for hits, you won't be in the business for very long. But if you make music because you love it, you’ll be in it for your whole life...

Check out last year's full length feature with Nile on his career and work with the likes of David Bowie, Madonna and Chic...
How to
Back to top