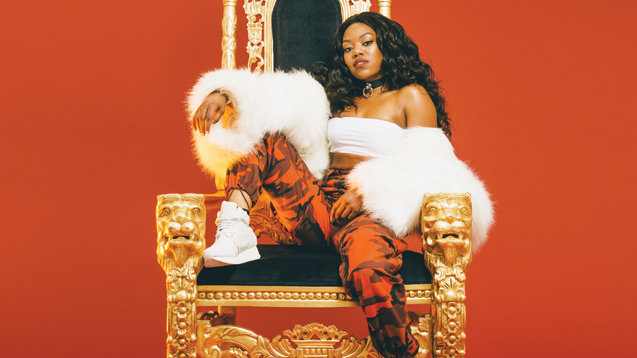 Over the last 18 months she’s netted a viral hit with her Queen’s Speech Ep 4 and 5 clocking up almost 50m YouTube views and counting. We find out how Lady Leshurr created a phenomenon…

Originally crash landing into UK grime back in 2011 with a freestyle over US rapper Chris Brown's hit Look at Me Now, Birmingham MC and producer Lady Leshurr has become an online sensation with her distinctive, personality filled freestyles.

Over the last 18 months her ladyness has netted a viral hit with her Queen’s Speech Ep 4 and 5 clocking up almost 50m YouTube views and counting. We find out how she created a phenomenon…

I knew I wanted to be a rapper because of artists like Eminem, Missy Elliott and Ludacris, then Lil’ Wayne. They inspired me to make music. Then, in 2011, my Look At Me Now cover took off. Back then I don’t think I was as consistent as I could have been, didn’t capitalise on that moment. I knew I had to take a step away from music to prepare something fresh and new.

It was a really hard decision. All I knew was music. But sometimes you need to make change to see change. I knew I’d have to step outside my comfort zone for it to pay off.

The Queen’s Speech episodes came from my year off, inspired by music videos from years ago, from Missy Elliot, Ludacris and Busta Rhymes - their videos were so entertaining and watchable. They captured something I really felt was missing from the scene. The industry now is very serious and people want to be seen as such. So I wanted to revisit these attitudes and bring something back, something that had obviously already been done but to give the scene a new lease of life. It felt like I could change the game and create new opportunities for both myself and UK grime.

During that year I sat down and wrote a list of everything I wanted to do, so with Queen’s Speech, I knew the name, how many episodes. I was inspired by watching a lot of battle raps - it’s just dissing, with these lyrics that make people laugh. They’re entertaining because they’re dissing each other in the funniest way.

All I needed was people who believed in it to be involved. So I found a producer and director. We didn’t have a high budget, just a cheap camera and it’s only one take of me walking down the road being filmed. I thought that doing it this way was easier, not only because you can save money but many people will relate to the realness even more. You’re not putting on a façade. I thought that it would connect with people quicker – what you see is what you get with me.

With Queen’s Speech Ep 1 I had no idea how people were going to take it. It was me coming back out again with something fresh, different music and sound. It was a big deal for me and I was nervous to the point where I left it for two months after I’d finished it before releasing it. I didn’t know how people would take it.

We didn’t promote it too much. I put the link on my Twitter and Facebook profiles. The majority of the promotion was from the people themselves as they’d never seen anything like it. Everyone was getting excited - who’s this girl, who’s this girl? They were sharing it with their friends, with their parents, whatever – it just caught fire. I think the main buzz was from Facebook. I had no idea how powerful Facebook was until I saw millions of people viewing it within hours.

I’ve been very overwhelmed by the success. It’s crazy how far an idea can take you. A year before Queen’s Speech, the majority of people didn’t know who I was. It’s created so many opportunities and it’s mad to look at it like that.

But in UK hip-hop and grime, if you’ve got something new to bring to the table, you’re going to get the attention you deserve. With [UK grime MCs] Stormzy and Skepta, they’ve both enjoyed success as their music shows off their true selves. And being yourself is what makes you different to everyone else in the industry - that’s how you succeed.