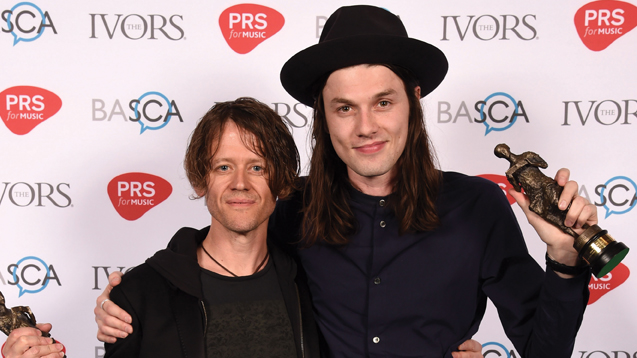 Hold Back The River - Iain Archer

Multi-award-winning songwriter, artist and producer Iain Archer chats about how he and James Bay wrote their international hit Hold Back the River

Iain Archer is a formidable songwriter, artist and producer who earned his stripes as a member of the multi-million-selling indie-pop band Snow Patrol.

He received his first Ivor Novello Award for their number one hit Run in 2005 and has since gone on to write with Jake Bugg, Rhodes, SOAK and James Bay.

This May, Iain received a second Ivor for his and James’ gilded folk ballad Hold Back the River. The track, which peaked at number two in the UK singles chart, also delivered them a Grammy Award nomination and made James a household name on both sides of the Atlantic.

I have a studio in the bell tower of an old church in North London. It’s a great room for singing because it gives you an awful lot back. It’s got alcoves and beautiful stained glass windows so it’s an inspiring place both visually and sonically. When a phenomenal singer like James comes along, the space really responds.

Generally when I’m in there I’m writing, but writing for me is always in permanent inverted commas. Writing is hanging out and spending time with people, eating, drinking coffee, talking… It’s the stuff in between the actual business of writing that informs the song as much as sitting down and playing instruments. I’ve come to learn there’s an awful lot that orbits the songwriting process.

James is an amazing guitarist and he just started playing several bits that have come to comprise the central parts of the song. It all sounded awesome and led us on a voyage of discovery. You spend time in a room together chasing the tail of multiple ideas, conversing about the stuff of life, getting so far down the line and then deciding to float for a while and try something else. It’s a great thing to do because you never know when that special thing is going to happen that’s just undeniable. James started playing, we tried a few ideas and then we were off. It was well worth waiting for!

I love it when a song has the ability to mean something of real importance to lots of different people. That’s always an emotional objective for me when I’m writing, because I’ve seen the power of those songs before. I want to be so absorbed by a song I can find myself and the most important parts of my life in it. When I look in people’s faces as James plays Hold Back the River, I can see people responding in a similar way.

When you make something very strong melodically, you instinctively try to write in a way that would make the song mean just as much to others as it does to you. We’re all aware of the unstoppable passage of time and the tide of life - and that’s what we felt we were tapping into with Hold Back the River.

As much as we were concentrating on writing, we were remaining open to possibility and to our instincts. It’s important not to switch off either the technical or emotional side. I feel this song, from the word go, has a genuine directness, which is really autobiographical for James. With us as songwriters, it’s not always natural to be so heart-on-sleeve and it’s really nice when you strike it right.

When we knew we had it, James slammed the guitar down and recorded his vocals. The demo happened really quickly. We always spend so much time during the day just hanging out and writing that recording can be a rush. But everything that we captured there in that demo came through on the final track.

I’m genuinely really proud of the song. I think the fact that it’s written with James – who is not just a very special artist but also a very special person, makes it so satisfying. It’s amazing to see someone as gifted as James get the recognition he deserves. I’m really gratified that we were able to do this together, the two of us, in a really natural way. It’s straight from the heart, a piece of soul, a genuine slice of us. Sometimes it seems the more honest you are, the more people respond.

Hold Back the River
Written by: Iain Archer and James Bay
Published by: Kobalt Music Publishing
Features
Back to top