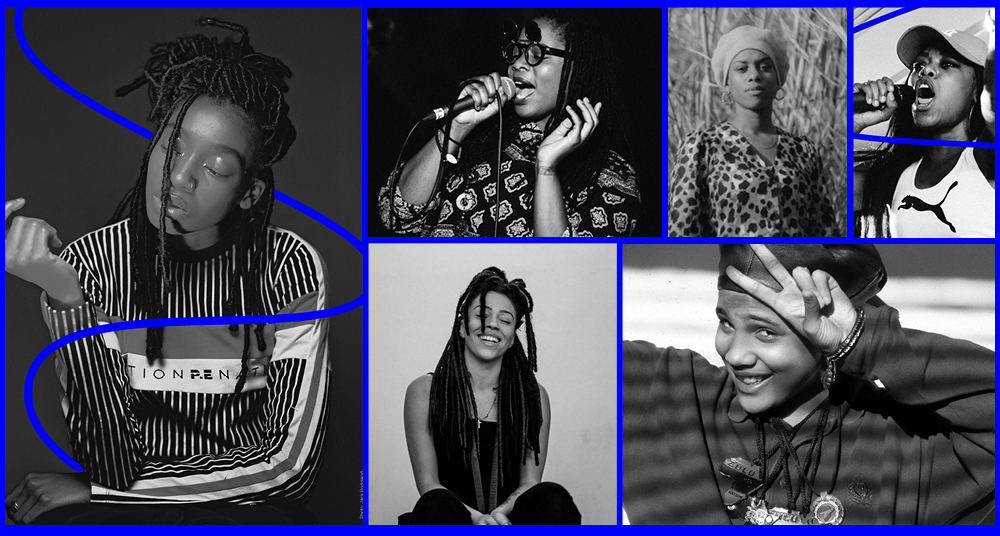 Women have been part of hip-hop's fabric since its inception. The first hip-hop group to ever appear on national television in 1981 included rap’s first Lady, Sha Roc. A 14-year-old Roxanne Shanté also started the world's first rap beef in 1984 with Roxanne's Revenge, when she fired back at UTFO’s sexist rhymes on Roxanne Roxanne. The Cookie Crew appeared on mainstream TV in 1987 and the Battersea-raised Monie Love joined Queen Latifa in 1989 to highlight misogyny and sexism on Ladies First. During this period, an international hip-hop community was developing and according to Professors Janell Hobson and Dianne Bartlow, marginalised Black girls were using rap as a device to talk about their experiences.

But historically, the creative input of women in music has been minimised, further impacted by society's narrow view of women’s roles. A report by Women in CTRL highlighted that merely 34 percent of board members in the UK music industry are women, and only three percent of those are Black.

Colourism in the industry is also problematic for Black women. The issue becomes even more evident when looking at shorter career spans of women, who often have to endure homogenisation from the media in which they are only acknowledged as part of a group and are overlooked as individuals. As a result, many choose to distance themselves from the ‘female link up’ categorisation; appearing in an all-women editorial features, or one off ‘all female’ collaborations, as the depiction often fails to reflect their creative reality.

The corporate involvement in hip-hop has shaped the genre’s values and uses women for profit and commodification, hence the reason I welcome spaces where women are the focus. It allows us to address the issues that dominate our usual surroundings.

The patriarchal system on which the music industry is built both restricts women’s creative work and generates toxic environments, generally promoting competition amongst women and enhancing the erasure of marginalised groups. Highlighting the input of women in order to combat erasure is important. As I explore the various stages of women in UK hip-hop, I spoke to rappers across generations to discuss their experiences and thoughts on these ever-present power dynamics.

UK hip-hop saw many transformations throughout the ‘80s and ‘90s and by the millennium, Estelle, Wildflower and Tempa featured on the DJ Skitz anthem Domestic Science. Baby Blue could also be seen performing regularly with Estelle before launching her solo career.

Big Dada and Low Life Records were the desired independent labels and most of the prominent rappers were performing in venues like Deal Real, Kung Fu, The Jump off and iluvlive in London. Award-winning poet and rapper Kae Tempest could be found in Deal Real spitting Wu Tang Clan inspired rhymes. Ms Dynamite, Stush and Nolay emerged via garage and grime and would ‘genre hop’ as part of a tradition of gliding effortlessly between MC lead sub-genres. Ms Dynamite’s Mercury-winning album provides an accurate depiction of the varied listening habits of this generation, often incorporating reggae, dancehall, hip-hop and soul into newer styles.

It’s Not Just a London Thing

The Floacist fused rap vocals with neo soul and regional rappers like Envy, C-Mone and Lady Paradox demonstrated that it wasn’t just a London thing.

Pariz 1, who is one of the most skilful rappers in the UK, sits effortlessly in the pockets of every beat she graces. When speaking about her experiences in Nottingham's scene she affirms, ‘it was small, but that helped us to stand out’. London wasn’t as welcoming. ‘I would go to some cyphers and open mic nights and people would not only leave me out because I was from Nottingham, but also because I was a girl. They used to say they hated the way I rapped because of my accent.’ These attitudes were only silenced once Pariz 1 left no room for debate. ‘It never became cool, it just became accepted. They were like ‘no matter what her accent sounds like, the girl’s got skills.’'

Hip Hop Connection, Touch Magazine and Blues & Soul were some of the outlets to be seen in, while Channel U and MTV Base were the top video platforms. If a rapper wanted a track to be heard on the radio, they sent it to BBC 1Xtra, Choice FM and Itch FM. Pariz 1 adds, ‘everybody who had a voice was able to come through and say something. We were about the music, rather than the fame of it.’

Modern technology has provided avenues for women to market themselves and this has been a useful tool in carving out individual identities. The new era of hip-hop has a louder voice in its protests against being policed by the patriarchy. There is greater representation and a recognition that women are able make choices about their freedom of expression, with more agency on how they use their body.

Discussing the misogyny that are still exists, Pariz 1 shares: ‘It was a lot worse back then to be honest, but it’s only changed now because dudes want to see women in their underwear in music videos. More women are up for it and the ones that aren't, are the ones that stay relatively unknown. It’s still very male dominated and the women that do come through are only able to because of co-signs from men, not because of the co-signs from other women. The men still decide what happens.’

Black music in Britain was in a rocky place at this point and artists were trying new things in order to navigate an industry that didn't want to hear their voices. SBTV, GRM Daily and LinkUpTV were established as the new leading media platform for Black youth in Britain, with grime being the dominant sound.

Women continued to make headway during this time. Little Simz was making a name for herself via Soundcloud while Damae aka Bubblerap was dropping Fugee-style verses in her trio Hawk House. The tradition of ‘genre hopping’ continued to grow and it became an everyday occurrence for grime MCs like Lioness, Roxanne, Amplify Dot, Lady Leshurr and Shystie to jump on tracks at a slower hip-hop tempo.

Speech Debelle had signed to Big Dada in 2007 and in 2009, became the first woman in seven years to win the Mercury Prize, following Ms Dynamite’s win in 2002.

Debelle's outstanding debut album used storytelling through rap in the same way as disenfranchised Black girls of the ‘80s. Her success created work opportunities for friends and women around her. ‘My tour manager was my best friend, she’d never done it before, but it was an opportunity for her to see the world.’

When reflecting specifically about the music industry Debelle recounts, ‘there were not many women in any positions of power, there certainly weren't Black people in positions of power in the majority of the places. You had Darcus, but Darcus was a one off, it wasn’t standard. Over the years it has got better for Black men. You've got your Benny Boom’s and the Twins (Alec and Alex Boateng), so there's a lot of people who are there to open the door for Black people. As things stand in this industry and across the world, the open doors have let Black men in, which is good, it’s just that Black women, or Femme identifying women have got to still wait.’

The growth of streaming gave an even bigger platform to underground sub-genres such as trap and drill. Little Simz became the first woman from the UK to perform in a BET cypher and versatile lyricists like Nadia Rose, Lady Lykez, C-Cane, Stefflon Don, Paigey Cakey and Ms Banks stepped onto the scene.

In recent times, taking into account the frequent crossovers between genres, Dis, Teezandoos, Ivorian Doll, Miss Lafamilia, Brixx, Keedz, Baby Elz, Cristale, Reemunni and Trillary Banks are some of those coming through on drill and UK rap. There is a wave of African-inspired instrumentals held down by the likes of Shaybo, Br3nya, Lavida Loca and iceè tgm.  Experimental and trap soul sounds are explored by rappers such as IAMDDB, Flohio, Juice Menace, Dreya Mac, and Nayana IZ.  An interesting emergence in the present day is the renaissance of traditional sounding UK hip-hop explored by artists such as Tremendous, Lady Sanity, Kay Young, R.A.E, Jaz Kahina and Bobbi Johnson, to name a few.

The north London poet and rapper Shay D created the first ever all women hip-hop tour within the UK, showing that a bright future lies ahead. The exceptional talents of south London rappers Lex Amor and Enny have brought a breath of fresh air to the art form, with Enny also shining a much-needed spotlight internationally on hip-hop from Black women in the UK.

Another rising talent embracing soulful hip-hop blends with poetry-infused rhymes is Deyah. Her faith inspired themes and vulnerability are a testament to the varied voices coming from the UK.

Thinking about the challenges women in hip-hop have faced, Deyah is optimistic about how things are developing, ‘I think there has definitely been development in terms of people coming together now forming different movements to bring awareness. GirlsiRate for example is a movement that is solely focused on the development of women, the protection of women, the creativity of women.’

The multi-talented Roc Nation signing Kay Young, who is a rapper, producer and singer, is a testament to the multifaceted talents that women possess adds, ‘I personally feel like there has been a slight shift. We are speaking up, coming together and speaking our truth which cannot be ignored. There’s still a lot of work to be done, but it’s important to me that I help create a space for the next generation of female creatives to fight intimation with courage.’