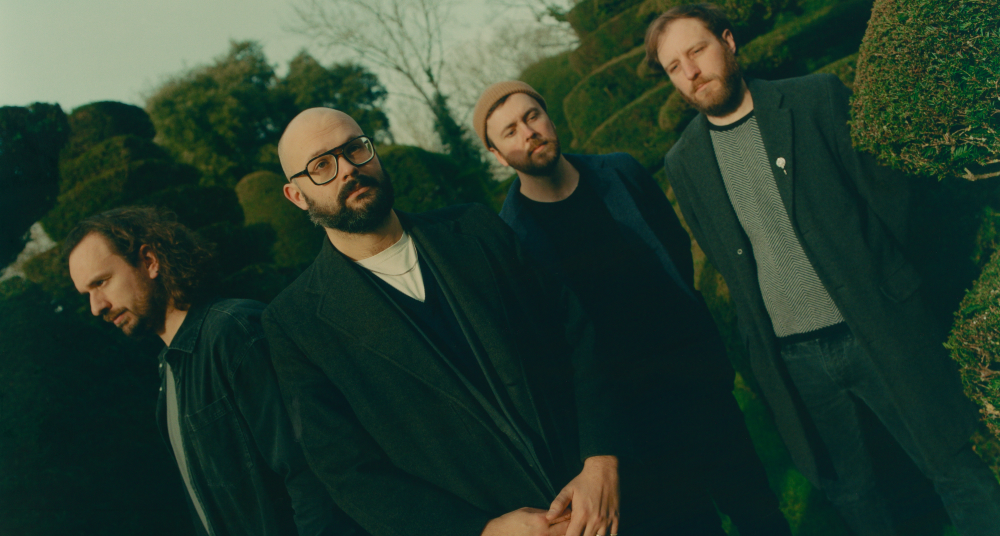 Things have changed for TV Priest. When their debut album, Uppers – a powerful record that deserved all its praise – was released, it was noted for its bolshy, post-punk energy and monarchist critiques. The image of TV Priest as a mouthy, political sort of band was accurate enough, but it left little room for the more introspective side to their work. Now, with the release of their second album My Other People, the band have taken the opportunity to redress the balance.

My Other People is a more personal album than TV Priest’s debut, firmly rooted in emotion and a desire to communicate. There is certainly darkness – vocalist Charlie Drinkwater is open about the fact that his mental health was not exactly robust during recording – but also hope. It’s still brash in places, loud and layered with bravado as you’d expect, but there’s a greater understanding of self too.

Take lead single and album opener One Easy Thing, for example. One of the more internal songs on the record, the track speaks of exhaustion, stumbling, prayer. Its accompanying music video shows Charlie in black and white, dressed as a knight and bloodied, sobbing on his knees. Then, he hauls himself to his feet, and starts to dance. The guitars build. The effect is undeniably hopeful. ‘I think you’re just trying to make the next best thing you can make, you know, but I think it showcases the fact that I can be vulnerable, I can hold a tune, we can do other things,’ Charlie says now. ‘It’s about texture. I think the thing I’m proudest of with this record is that it’s very textural, there’s lots of ideas, lots of different tones to it. Whether or not people like those tones, I can’t judge. But I’ll always be proud of it.’

'It’s kind of freeing to realise I can’t really stand next to everything and say “Hey! Like this!”’

In general, Charlie is keen to resist the urge to over-evaluate. Not out of an unwillingness to engage, but rather because My Other People is a different sort of album to the one that came before it. And, in some ways, TV Priest were different people to the ones that recorded it.

‘The first time around, I really explained a lot of my reasons as to why I made the record. And this time, I have a strange relationship to the record. Sometimes I listen to it and it sounds like someone else wrote it, or I stepped outside of myself because I was having a very strange time,’ he says. ‘Maybe it’s just an effect of getting older. I’m 34 now, and maybe I just care more about what people think about me.’

When Uppers came out in 2021, the world was locked down. Like many other artists whose albums came out during the height of the pandemic, the band watched its release at something of a distance. The aim was to communicate, to make connections, but these connections were difficult to quantify when everything was happening through a screen. Charlie refers to it as like having ‘disembodied voices kind of floating, that we hadn’t yet met or seen.’

The effect seems to have been somewhat disorienting. ‘The nature of being an artist or making any art is, you present it for critique. That can be good and bad critique – I can’t affect how someone feels about my words and my work. But I think it was something I maybe hadn’t anticipated before,’ he says. ‘I think we didn’t necessarily understand that it was going to reach a wider group of people.’

This time, the band are a little bit more aware of how an album can take on a life of its own once you release it into the world. ‘I was really conscious the second time around of how easy it is to misconstrue someone’s intention, but also how you haven’t really got any control over that,’ says Charlie. ‘You can only really say your thing and then hope people understand it. It’s kind of freeing to realise I can’t really stand next to everything and say, “Hey! Like this!” you know?’

It would have been easy to shy away from vulnerability on My Other People. Despite the freedom that comes with accepting you can’t change people’s perceptions, misunderstandings and misinterpretations can still sting. But there’s power in such openness all the same, and tracks like the tender, acoustic The Happiest Place on Earth or blistering recent single It Was Beautiful are all the better for it.

None of this is to say that TV Priest don’t also look outwards. Like its predecessor, My Other People still puts England under the microscope. The political awareness that shone through on their debut album is still here, and tracks like It Was A Gift examine legacies of Britishness and history through a personal lens. Meanwhile, the churning Limeshouse Cut is deeply rooted in the landscape and the water.

‘I think connection to landscape and place was really important this time around,’ Charlie says. ‘I live in the countryside now. I’m very fortunate that I can do that, but it was a conscious choice to do with how it makes me feel. Having spent the best part of my adult life living in a city and with the others still living in the city, connection to place and how that impacts you hung over us quite a lot.’
Here, again, is that sense of change. On My Other People it’s there at every turn.

'We spoke a lot about this feeling that when you live in a city, there’s always a level of transience even if you put down roots. I lived somewhere for ten years and it felt like home, but I leave for six months and it’s gone.’

‘I was travelling into the studio in London most days, going to places that I’d lived for a long time and seeing suddenly how they were changing or regenerating. Alex from the band is an architect by trade, so we spoke a lot about this feeling that when you live in a city, there’s always a level of transience even if you put down roots. I lived somewhere for ten years and it felt like home, but I leave for six months and it’s gone.’

This sort of psychogeography sits right at the heart of My Other People, cities and rivers, history and deeply personal themes all collapsing into each other like layers on a map. In many cases, it’s hard to untangle one thread from another.

‘This album is still rooted in my personal response to political situations. I was thinking a lot about England and how you can love and hate somewhere very equally,’ says Charlie. ‘I feel so connected and so rooted to the place that I come from, yet I’m so repulsed by so much of it. Both now and historically.’

On My Other People, TV Priest are showing the textures of many sides.
Features