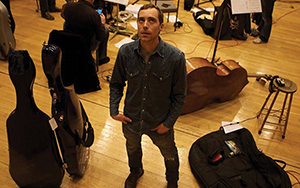 For its latest TV campaign, the Co-Operative Bank worked with a community in Tanzania. Joel Cadbury’s River Kalimba Eclipse was written as the film edit was in full flow. Here, Music Sales’ Creative Lucy Bright talks us through the process.

For its latest TV campaign, the Co-Operative Bank worked with Oxfam to find a community in Tanzania in which to film. Joel Cadbury’s River Kalimba Eclipse was created especially for the advert, and was written as the film edit was in full flow. Here, Music Sales’ Creative Lucy Bright talks us through the process.

How did the placement come about?
Joel (above) had previously worked with the same director on a Cancer Research advert, which was a very different brief. However, the director thought Joel would really understand this one too.

Who was involved in the sync?
Joel worked closely with the director and editor. The advertising agency Leo Burnett just trusted them to get on with it - which is a really creative way to work.

Why do you think it worked so well?
The music was written as the edit was in progress, and Joel kept an open dialogue with the director. He had a demo completed by the time the agency and client watched the first cut of the advert, which really helped. When this happens, the composer isn’t then trying to replace a piece of temporary music that the client may have become attached to.

What are the merits of using bespoke music in TV adverts?
You get a piece of music which isn’t associated with any other brand or product, and it fits perfectly to picture.

You first signed Joel as a songwriter – how has he changed since then?
We loved the songs Joel had written with South and UNKLE and thought he would be a great addition to our stable of songwriters. We quickly saw he had scope for a lot more, so we introduced him to the composer Melissa Parmenter, with whom he then wrote the score for Michael Winterbottom’s film The Killer Inside Me.

Our classical promotions team connected Joel with Royal Ballet choreographer Wayne McGregor, who then paired him with choreographer Kate Prince for the 2012 London Olympics Gala at the Royal Opera House. Wayne also commissioned Joel to write the music for his ballet Borderlands with San Francisco Ballet in 2013.

More recently, Joel has moved into bespoke music for adverts and has worked with some great brands including Jaguar, Volvo, Bentley and Lidl. He’s also working with Michael Winterbottom again on his latest film The Emperor’s New Clothes.

What help and support have you given him along the way?
One of the great things about Music Sales is the breadth of expertise within our staff, from sync to ballet and beyond. We have been able to introduce Joel to brilliant directors, advertising agencies, choreographers and collaborators - and he has always made the best use of those connections.

What is it that makes Joel’s music so attractive to directors, brands and advertisers?
Joel’s ability to understand a brief, bring his own flavour to the soundscape and also work well in a team means that directors and agencies keep working with him again and again.