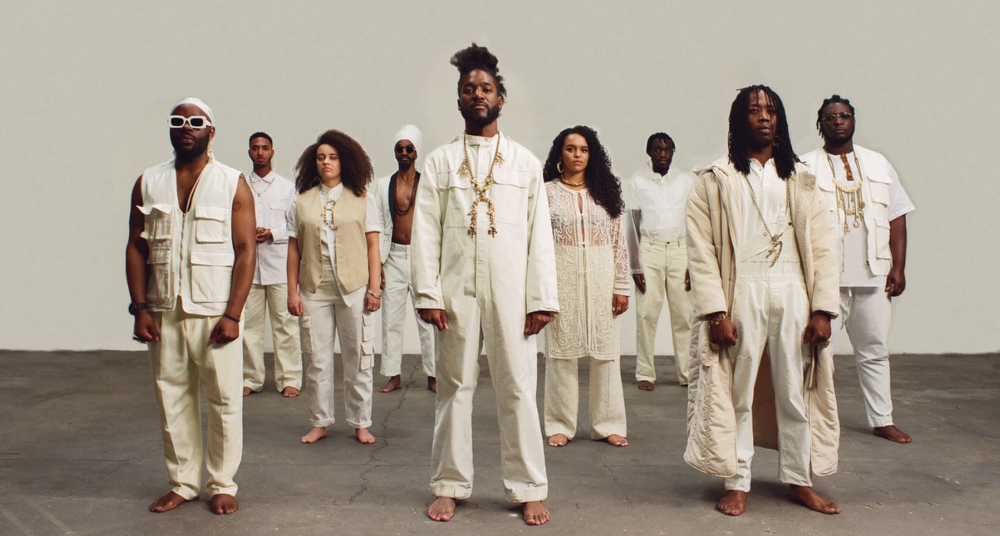 I first attended Bristol’s Dot to Dot festival in 2019; a year that saw the likes of CROWS, Viagra Boys, Jordan Rakei, Dream Wife, Squid, Heavy Lungs, Lauren Aquilina and Rachel Chinouriri performing. This year, Dot to Dot will play host to everyone from Chubby and the Gang to Billie Marten, Sports Team to Steam Down, further cementing them as champions of the eclectic line-up. It’s little wonder it sells out year after year.

As an Outreach Manager at PRS for Music, I work directly with emerging members and non-members as they launch their careers. We choose to support festivals like Dot to Dot, Liverpool Sound City and Wild Paths because they’re a crucial platform for these artists and bands to showcase their talent.

Ahead of the festival, I spoke to award-winning jazz family Steam Down. Steam Down will be playing this Saturday (25 September) at Bristol’s O2 Academy and in Nottingham the following day.

There are eight members in Steam Down. How did you all meet and when did know you wanted to work and play together?

I think one of the clear things to start off with is that you can't really categorise Steam Down as like a band or a collective as in the traditional sense. So, it really starts with the vision of pulling musicians together to form a music community, rather than form a band.

I think that central idea is what changes it from being that. The way that everybody has come together is, essentially, through myself speaking to people, or friends of friends of people. It’s more like I'm pulling together a football team than it is pulling a band, if that makes sense.

Does it make it a little bit more relaxed in that sense, like that you're like a community rather than a band?

I think, one, yes, you build closer relationships with people because you're speaking across your individual creative voices, so it's quite personal. I guess in a more traditional space, it's just about playing the music. You don’t necessarily know all of the reasons why somebody has chosen to create something.

Then the other side of it would be, in a band usually the four members of the band get together and sit down and jam out or write music and I guess we don't. That can happen, but it's not the central part of how the creativity is pulled together.

I would say building friendships is always key in any kind of creative project because, if you're going to be on the road with anybody for any amount of time, you just need to hang with each other. The music is only half of it.

I would say that outside of even Steam Down, in my years of being in music, that has always been important: knowing that I can hang and chill with the people I'm in a project with. You can get over your issues, they’re always going to come up.

Where does your musical inspiration come from?

I always think creativity is so fluid that you don't know how ideas are going to come to play.

I think it's the combination of those past and present which we pulled together to create what we’re doing now, from sound-system culture to traditional folkloric music. There are those little bits of those influences that come together.

There's a generational line between those genres, so like grime goes back to dub, reggae and sound-system culture. That takes you back to, say, Jamaica, then that brings you to reggae. Then, before reggae, you get Kumina, which is a traditional form of music that's just drums and vocals. There's a whole line there for me, which is all connected. I think everybody has a little bit of their own identity because they'll contribute a bit to the music.

How has returning to live been for Steam Down, where have you played and what's been a highlight for you? Have you missed performing and sharing your music with others?

Yes, it has been amazing to play shows in front of wonderful, lovely people. I’m specifically going to highlight Green Man Festival because it was really beautiful, just receiving love from people and sharing those moments with people. Knowing that you spend all your time working on your craft for all of these years and then you can see its positive effect on people, when you see people smile and it's like there's joy in your life. It's amazing to be able to contribute that to people's life and see it in real time in front of you, because when people listen to your recordings you don't really know how they're responding to it. You don't see them nodding in their car or wherever they are, like enjoying it, but in that space, you get to see everything. I think even more powerful than that is being able to see everybody doing that together, all as one group.

What does the future hold for Steam Down?

Definitely releasing a couple more records so people can hear the music outside of coming to the show.

Second thing is that I would like us to influence music culture in the UK in terms of there being more live shows that are about people coming together and understanding how a creative role in music can benefit people's well-being.

I'd like people to take away the sentiment that music can really help your well-being for a short space of time. That then might help you, tomorrow or the day afterwards, just pick up your energy.

That’s really powerful, especially when there are so many things that are going on. You know… pandemic, zero-hour contracts. There's a list – a long list – of problems that people have out there. It’s like let’s make music that helps people get through their day, really.

Sports Team: The headliners for this year’s festival. An absolute must watch if you’re into indie-rock consisting of songs about the M5, Fishing and Ashton Kutcher.

Black Honey: The Brighton Rock quartet have travelled the world, supported Queens of the Stone Age and have created an inclusive ideology where girls can be the protagonist and the boss bitch with a complex narrative. I stand firmly with them.

BEKA: Be prepared to fall in love and be moved by BEKA’S sound which is enriched with happiness and joy whilst exploring the realities of everyday life. Her debut album JOOJ was released in May and I just can’t get enough of it.

Lex Amor: Lex's debut EP, Government Tropicana, tells the story of the first-generation working-class London whilst being a celebration of culture and her own life. Amor’s latest single, Ruckus, has a similar narrative of self-belief and Black pride. Her voice is captivating, mesmerising and not one to miss out on at Dot to Dot.

Sam Wise: As a pivotal member of cult hip-hop collective, House of Pharaohs, and with loyal fans which include the likes of Frank Ocean and Miles From Kinshasa, Sam Wise is not one to miss at Dot to Dot. Get down early as his show is going to be a popular one - I'll see you there.

Walt Disco: Self-expression, self-love and not caring about what anyone thinks is huge part of what Walt Disco are about. If you like flamboyancy, pop synths and stand out vocals, I implore you to go and see Walt Disco. You will not regret it.