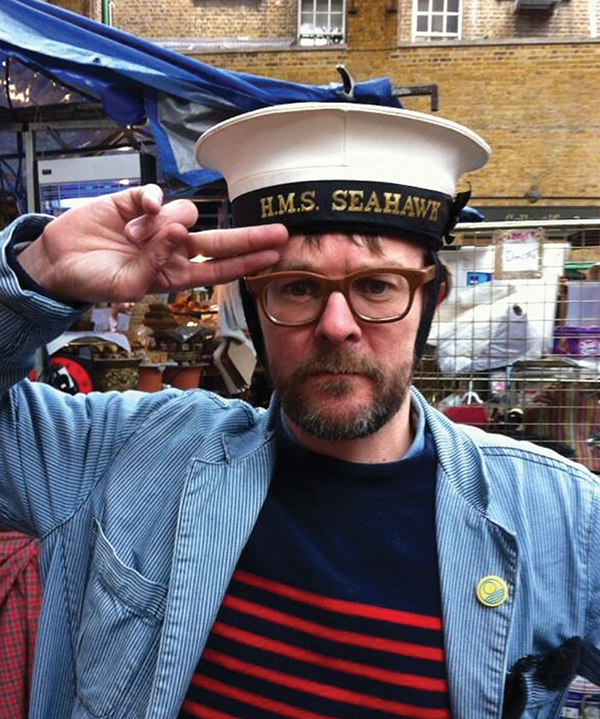 We delve inside illustrator, artist and DJ Pete Fowler's record box and emerge covered in yacht rock, funk and soul. Check out ace selections from Steely Dan, Cerrone and the Beach Boys...

When he’s not busy designing record sleeves for his fellow countrymen, Pete can be found creating skateboard graphics, wall sized murals and his own range of Monsterism toys.

Outside the art world, he’s also one half of cosmic ‘deckshoegaze’ Seahawks, a duo with a penchant for ambient disco and yacht rock. Pete can also be found regularly DJing his musical wares everywhere from Glastonbury tents to East End boozers. Check out his playlist here featuring some prime yacht rock cuts as well soul and funk...

The first music I remember hearing was…

The first song I remember hearing and knew the name of was Baker Street by Gerry Rafferty. It was on the radio constantly in the car when I was a kid. It must have come out the same time as Star Wars as I always associate it with that film.

A seven inch single by The Specials although I can’t remember which one. I do remember liking the artwork as much as the music. That started me off on collecting.

Street Player by Chicago. I’m mildly obsessed with it at the moment. I’ve listened to that in the past and enjoyed it but I heard it at a night in Walthamstow Village where I’ve just moved to and it made total sense. I always need to hear my new favourite songs as soon as I wake up in the morning.

Probably Feel Flows by the Beach Boys or Peg by Steely Dan. You get a bit older and certain records become like signifiers in your personal history and time on this planet. When music gets given that kind of meaning and depth, you then realise how powerful and important it is. I see music as a vitamin really, and I would be ill without it.

The song that makes me want to dance is…

Hooked on You by Cerrone.

The Power of Your Love by Spirit of Love. An amazing gospel disco single that provokes tears of joy.

The song that i know all the words to is…

There are so many but I’ll pick one out of the hat: Haven’t You Heard by Patrice Rushen.

The song i want played at my funeral is…

Coming Up by Wings. I played it at one of my favourite gigs of last year at a stage called the Crow’s Nest at Glastonbury. But I do love the idea of it being a funeral song. Everyone’s been to their fair share of them but if someone has the idea of remembering me, I’d like it to be a party. The bar’s open and free drinks to the first person to dance on my coffin. I’m deadly serious!