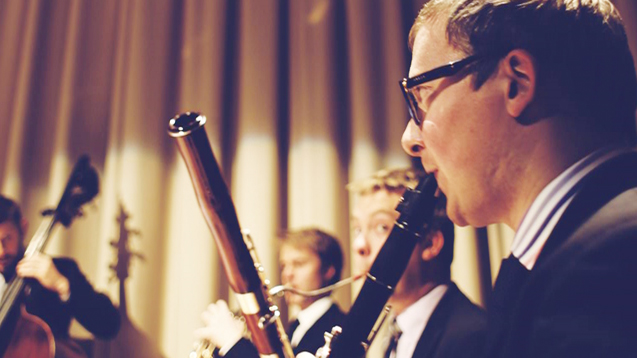 Clarinettist John Slack has worked with some of the UK’s leading orchestras and is a founding member of the Berkeley Ensemble. Here, he reveals the songs that have shaped him.

As a founding member and General Manager of the Berkeley Ensemble, his love of chamber music has taken him across the UK and beyond. He has performed at festivals such as Latitude and collaborated with musicians including opera star Sir Thomas Allen CBE and The History Boys composer Richard Sisson.

Music education is central to the ensemble’s work. In 2014, it launched the New Cobbett Prize competition for composers and in late 2017 it announced its involvement in Accelerate, PRS for Music’s inaugural career development programme. The new initiative will see eight composers develop new works over the next 11 months, culminating in a special concert in November performed by the Berkeley Ensemble.

I have a terrible memory but it’s a toss-up between one of two singles: Wannabe by the Spice Girls and Barbie Girl by Aqua. I’d like to think my tastes have improved since, but at the time I was 12 and, like every other almost-teenage boy, caught up in the excitement of it all. I bought them both in Woolworths.

The first piece I developed an obsession for was…

J.S. Bach’s Goldberg Variations. I listened to the heart-aching opening Aria on repeat during exams at school. It’s something I still return to nowadays when I’m stressed out and need to relax. Glenn Gould’s second recording (1981) is a perennial favourite but right now I’m also loving Lars Vogt’s take on the work; he brings out an astonishing range of moods and more joy than most.

Well, I wrote a cracking Christmas song for my GCSE Music coursework!

I absolutely love In the Heart of the Moon by Malian musicians Ali Farka Touré and Toumani Diabaté. The album was recorded on the banks of the Niger River with no rehearsal and the musicians had barely met or played together before – it’s pure uninhibited, mesmerising music-making and won a Grammy Award in 2006.

The piece I wish I’d written is…

Igor Stravinsky’s The Rite of Spring. What fun it must have been to cause so much trouble, inciting a raucous audience who were so loud the dancers couldn’t hear the orchestra and required a choreographer to shout numbers to them from the side. And then to be credited with the birth of modernism!

I’m not really up there with the world’s weepiest, but music almost never fails to give me goose bumps or spine-tingling shivers. The Adagio from Mozart’s Piano Concerto No. 23 gets me every time.

I’m absolutely useless at remembering the words as I always get caught up in the music. I can just about manage Twinkle Twinkle Little Star.

My all-time favourite film score is…

I’m a great fan of Michael Giacchino. His score to The Incredibles was incredible and one of the first film soundtracks I had on repeat for weeks. More recently I loved his music for Up, and what a great film that is too.