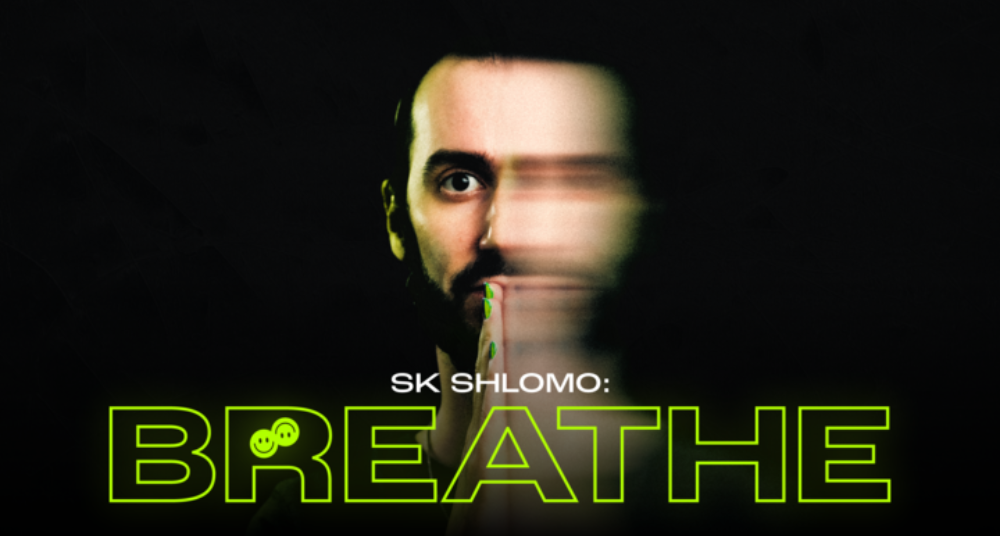 Several years ago, SK Shlomo hit a rough patch. He was an acclaimed beatboxer, a celebrated theatre performer and a well-respected collaborator. But something had shifted. In the midst of a deep depression, he stopped performing. Shlomo spent almost two years off the road, recovering what had felt lost. After a powerful comeback tour, a series of personal revelations changed the way that Shlomo viewed themselves and their work. The result is a one-person show that is more personal than any of their previous output, as Shlomo touches on themes they have never previously shared in public. It is about queerness, gender, being foreign, disability and mental health and, ultimately, the healing power of rave.

Breathe: The Play That Becomes a Rave, has been in development since 2019. At that year’s Edinburgh festival, Shlomo was performing the stage show that accompanied their first album Surrender, having just come out of that period of mental ill-health. 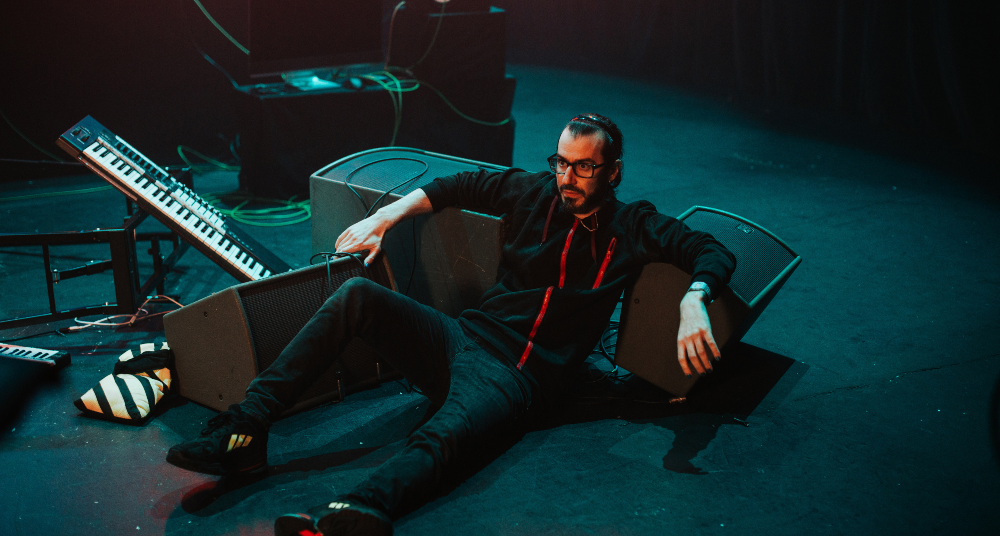 ‘Surrender talked about the really hard time I was having immediately before that with my mental health, and it became a bit of a celebration of recovery,’ Shlomo says. ‘On the very first night of this one month run in Edinburgh, I was like “I’m still here, I’m alive, would you just celebrate with me?” And this massive Scottish dude in the front row just stood up and kicked his chair away, raving. Then everyone else followed suit and I was like “oh, this is an idea”.’

Spurred on by that experience, Breathe brings together previously disparate elements of Shlomo’s work, blending the energy of a festival with the storytelling of theatre. In many ways, the show is a distillation of what they have been trying to achieve in different forms across their entire career.

'This is it. This is finally the answer to where I fit in the world as a performer. I do want to tell a story, but then I want to let them let loose.'

‘I’ve always loved doing standing shows – that was my background, doing gigs and festivals and raves. But then when I started doing seated shows, I loved it,’ they say. ‘You could tell much more of a story, you could get more deep and emotional in a way that people just don’t listen to when they’re standing. But then the crowd would always feed back that they loved the story, but they also really wanted to dance because the music is quite ravey. And I was like, “This is it. This is finally the answer to where I fit in the world as a performer. I do want to tell a story, but then I want to let them let loose."'

Release and relief are running themes in Breathe. The show is borne out of a sense of, if not quite oppression, then at least one of self-suppression. It tells the true story of an impromptu rave in Shlomo’s living room, as he was coming out of a period of self-imposed isolation after a difficult mental health episode. By taking a step back into the light and opening up to other members of their community, Shlomo realised that they were not as much on the outskirts as they had thought.

‘I'd been convinced that the people in this village that I'd moved to would never accept me, and that they judged me, and that I was gonna have to pretend to be something I wasn't,’ they say. ‘In the end, I realised that if I can actually open up and connect with these people, they're just like me. They're just ravers like me.’

The experience changed things, almost overnight. ‘We ended up having this brilliant celebration in my living room. I wasn't really well enough to go out raving so they all came to me. It was a really magical turning point in my life,’ Shlomo says. 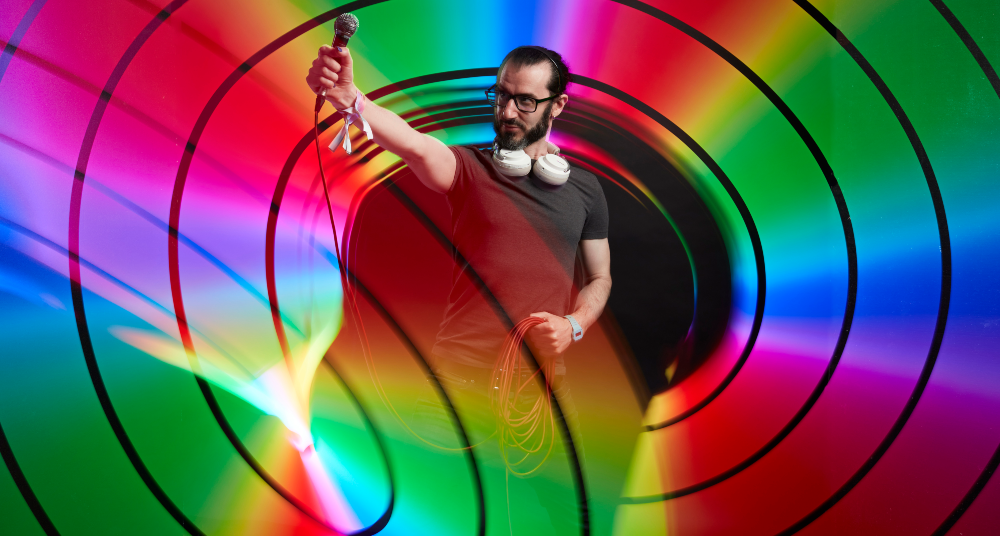 They were afraid of being ostracised for all sorts of reasons, one of which was their queerness and gender identity, which they publicly discuss for the first time in Breathe.

‘Previously, I’ve kind of presented differently on stage to how I would in private,’ Shlomo says. ‘But I’m kind of done with that. I just had this moment last summer, where I had a little bit of a mental health wobble. It wasn’t anything like what had happened to me three years before that, where I was in a very high-risk place and very close to suicide. But it was enough for me to be like, “I am definitely going to stay alive. I just need to reprioritise.”’

‘I basically don’t have a single gram of energy left for anything that isn’t serving my absolutely basic reason for being here, which is I’ve got two beautiful children who are the centre of my world. And if I’m going to be their parent, and be here for them, I’ve got to look after myself.’

The effects of suppressing such a major part of your identity can be sickening. Shlomo didn’t realise just how much it was affecting them until another aspect of their life was made clear. After that, the walls they had built around parts of themselves started to crumble.

‘I got diagnosed with ADHD a couple of months earlier, which was a huge identity shift. And I was just like, I can't keep masking myself anymore,’ they say. ‘You do that to try and protect yourself and try to protect yourself from oppression, but the amount of energy you’re spending to hide who you are is more detrimental than the energy spent on worrying about being judged by other people. Obviously I still worry about that, but oh my god, the relief.’

'The amount of energy you’re spending to hide who you are is more detrimental than the energy spent on worrying about being judged by other people.'

The need to self-police is more reduced in some spaces than others. Shlomo also performs shows for children and young adults, and has noticed a greater degree of awareness of disability and LGBTQ+ identities among the younger generation.

‘It's so open, with the kids. I’m like, “I've got a disability gang, I’ve got ADHD and it makes it hard for me to do some things. But it also helps me really have superpowers in other spaces. And I'm non-binary.” Then I'm getting these kids, children and young adults, running up to me saying “I have ADHD too,” or like, “Hi, I'm genderqueer.” And I'm like, “This is so cool!”’ says Shlomo.

It’s a stark contrast to the way things used to be, not just in Shlomo’s personal life but also in comparison to the school environment of the Section 28 years, when conversations around LBGT issues were explicitly prohibited. The blanket ban had an enormous social impact, affecting the school experiences of an entire generation of queer people.

‘It makes me cry every time. Imagine if that space had been there when I was a kid, when you just did not talk about these things. I went to a boys’ school, where if you were not vocally homophobic you would get physically bullied. They’re completely different worlds.’

Through these experiences, as well as through conversations with their children, Shlomo has found a clearer path to empowerment and hope for the future.

‘I can just be in a conversation with the 11 year old and the seven year old is listening to every single word. It’s just magic. I still can't believe I spent so long not being real about that stuff. Because that isn't actually empowering my children, or me. So yeah, I'm done on this show.’

Once that door is opened though, closing it off can be painful. For the narrative of Breathe to work, Shlomo had to return to the version of himself that played things close to the chest. It was a reminder of a time when they were less free, less open, and more unhappy.

‘Actually, it's been really hard work with this show. Because at the beginning of the show I go into my past self, before I was out and before I'd had this breakdown, and we kind of grey my character up. I put on this massive grey hoodie and I become grey. And it's really frustrating because a lot of the show is spent like that, kind of masking,’ they say. ‘It's really annoying because obviously, the end of the show becomes an absolutely massive glitter bomb. But we have to we have to earn that.’

They have certainly earned it. The release, when it comes, is a sparkling celebration. Closing proceedings with an electric, neon-bright rave, Shlomo shows the audience that - far from being a source of shame – there is power and joy in publicly being exactly who you are.