Siouxsie and The Banshees first gig

It was supposed to have been the quietest night of the week. But on Monday 20 September 1976, London’s 100 Club on Oxford Street reverberated to one of the most notoriously unmusical rackets ever to have taken place on a British stage.

The event was the first night of the two day Punk Festival. The cacophony came courtesy of four young iconoclasts, determined to take the new wave’s rule breaking rhetoric to dramatic extremes.

‘I wanted something apocalyptic to happen,’ says Siouxsie Sioux, ‘like making people’s guts fall out.’ Her then partner Steven Severin, who’d picked up a bass guitar for the first time in his life just 24 hours earlier, felt the same. ‘We were wilfully perverse and anti-everything.’

Rock had undergone numerous changes since the mid 50s, though nothing had quite prepared it for the mood of insurrection ignited during 1976 by the Sex Pistols. Their philosophy, neatly summed up in the catchphrase ‘We’re not into music, we’re into chaos’ , initially sounded like a gimmick. But in the days after the 100 Club Punk Festival, brainchild of the Pistols’ manager and arch-provocateur Malcolm McLaren, punk had become the most talked about music driven youth subculture since hippies in ’67.
When McLaren complained, just days before the festival, that one of the bands had pulled out, the 19 year old Sex Pistols in-crowder, soon to be known as Siouxsie Sioux, heard the call. ‘We’ll do it,’ she said brazenly. The ever-present Severin nodded in agreement. Within hours, they’d recruited a young guitarist from Harrow, future Adam Ant collaborator Marco Pirroni, and had a knock back from fellow Bromley-based Pistols’ enthusiast Bill Broad (later Billy Idol), who felt it would be bad for his reputation.

The fledgling quartet was made complete when Sid Vicious, the Pistols’ most disreputable cheerleader, volunteered his services. ‘He said he had absolutely no ability,’ Severin recalls. ‘That sounded absolutely brilliant to us.’ 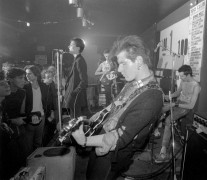 A rehearsal on the eve of their debut found Vicious further fuelling the Bromley pair’s keenly felt iconoclasm. Just ten minutes after plugging in at the Clash’s Camden Lock rehearsal studios, Vicious declared, ‘That’s enough.’ A brief discussion followed, where the quartet threw around titles of songs they’d like to trash - The Theme From Goldfinger, or a Bay City Rollers song, perhaps. It was agreed that Sioux would recite extracts from The Lord’s Prayer, while for the non-musicians, there was one simple edict. ‘Let’s just make a noise,’ said Sid.

Suzie (sic) and the Banshees launched the 100 Club Punk Festival in controversial fashion. An assortment of Nazi-style regalia, from the singer’s swastika armband to Sid’s self-scrawled Belsen Babies tee shirt, was prankish enough. The 20 minute or so improvisation around a Sid Vicious drumbeat, in the frills-free style of The Velvet Underground’s Maureen Tucker, polarised the crowd.

‘It’s in E!’ yelled Marco Pirroni, the only person on stage who had a basic grasp of rock n’ roll rudiments. Severin looked mystified. ‘Just hit the thick string!’ cried the guitarist. Over the thudding beat, occasionally lit with mocking snatches of familiar rock riffs such as the Rolling Stones’  (I Can’t Get No) Satisfaction, Siouxsie peppered her sacrilegious monologue with lines from Twist and Shout and Deutschland, Deutschland Über Alles.

So far, so deliciously belligerent. But, admits Siouxsie, ‘Nothing went through my mind other than pure fear.’ When Sid decided to stop playing, so did the rest of the band. ‘I picked up my beer, got off the stage and walked through the audience,’ Siouxsie recalls in her biography. ‘There was a pause then everyone started clapping. As I walked away, I had no idea I’d be doing this for the next 30 plus years.’