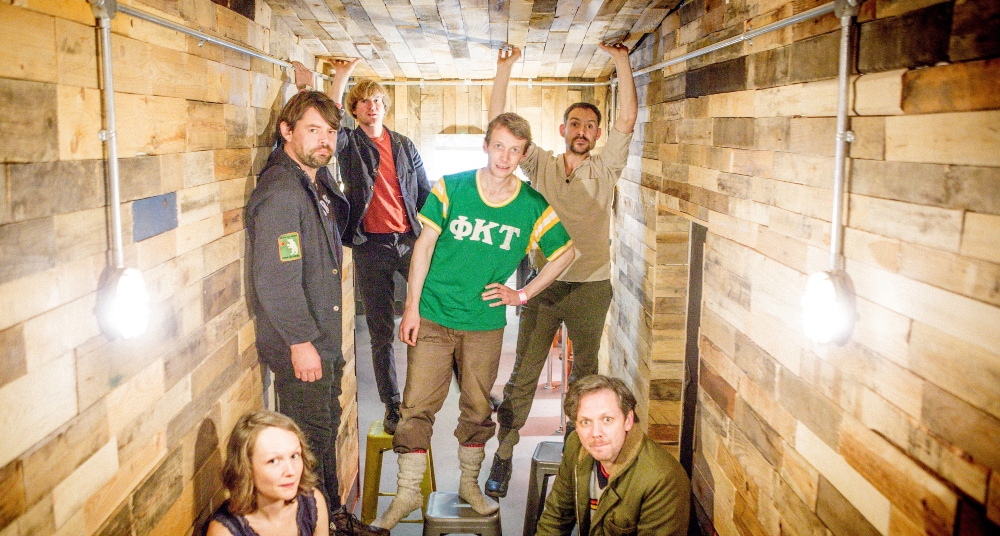 Sea Power have been through personal trauma in the midst of a global horror and now emerge on the other side with Everything Was Forever, the exceptional eighth album from the English indie rockers.

It’s taken a little while for Sea Power to return to these shores. Now though, Everything Was Forever — the eighth studio album from the indie band — sees them ushering in a new era nearly two decades down the line.

With the ‘British’ part of their name dropped last year — the group said in a statement at the time that it was in order to avoid any connection to ‘an isolationist, antagonistic nationalism’ — everything about this release feels like a fresh start and early reactions are already quickly gathering speed, singling it out as one of their best yet.

You could be forgiven for thinking that Everything Was Forever had an easy start to life, however it was quite the contrary. It came from a period of intense loss — not only globally, but personally for the Wilkinson brothers who sit at the heart of Sea Power. The father of Scott and Neil passed away just before the album was written, with their mother also sadly passing during the recording process. Speaking over Zoom, Scott describes the feeling of fragility, explaining the sense of poignancy that runs through much of Everything Was Forever. ‘A lot had happened,’ he begins, ‘COVID was also going on, it was eerie and quiet like a really long Sunday or something. You end up reminiscing a lot and thinking back to childhood.’ Admitting that he hasn’t discussed those feelings with his songwriting partner and brother, he guesses that Neil had been through a similar journey. ‘You want something honest, maybe?’ he says, more of a question than an answer.

'I’ve found myself noticing weird noises like the way I clear my throat, and I end up thinking “that’s my dad.”'

That honesty marks out this record as something that stands apart from what is already an illustrious back catalogue. While previous records have taken in aspects of politics, history and the natural world, exists in a space much closer to home. ‘It’s something different,’ nods Scott, ‘and I like the fact that it feels a bit more friendly, even when it’s quite dark. It’s a bit more personal, possibly a bit less pretentious. We’ve written a lot of songs about other things in the world, but this one’s more based on our feelings.’ Songs like the ambient Lakeland Echo and the punchy Two Fingers swirl with a nostalgic longing, the latter based on sayings from their father. ‘I definitely have funny moments [thinking about it],’ says Scott of sentiments familiar to anyone moving through grief and loss. ‘Sometimes they’re great — sad but lovely. Other times it’s just confusing. I guess it’s different for everyone, it does change you though. I’ve found myself noticing weird noises like the way I clear my throat, and I end up thinking “that’s my dad.” I don’t know if I like that or not,’ he laughs.

With the album coming together over lockdown, and the traditional band tussles over track listing and sequencing decided by returning producer Graham Sutton, Scott describes the process as like being given an extension on their homework. The album pivots in mood throughout — from the rumbling post-punk vibes of Doppelgänger to the swooning Fear Eats The Soul — the entire record is a delicate juggling act of emotions and textures. It all builds into a record that stands shoulder to shoulder with their very best, but one that has seen them put away some of the nonsense (for now). ‘We’ve always had this thing where it’s like a slapstick element combined with a really serious attitude,’ smiles Scott, ‘like Charlie Chaplin meets the Sex Pistols. But this time, we all felt the same thing, which was let’s make sure we don’t go anywhere near fun gimmicks over otherwise sensitive music. In the past, we’ve had songs like No, Lucifer, songs which are straightforward but complex subjects. And then we put a Big Daddy wrestling chant over it. It’s good, but you also end up thinking “did we ruin it a little bit?”’ When I point out that it is those eccentricities that make Sea Power who they are, Scott agrees, but only to a point. ‘Well, we’re no longer that Sea Power,’ he laughs, ‘We got rid of that element.’

When the band formally known as British Sea Power announced last year that they were dropping the ‘British’ element, the usual suspects of discontent were riled — even to the point of the band appearing on GB News in a fierce debate with Dan Wootton. ‘He went on a real rant,’ smiles Scott, ‘and it was just like, thanks for explaining for us why we’ve done it because we couldn’t have done it better. I don’t think it was a big deal for 90 percent of our fans or people generally but it was a week where we got to see the dark recesses of Twitter and the beliefs of this sort of weird angry dark well of humanity.’ Pointing out that it was aimed as a step away from the kind of culture wars that fuels those recesses, Scott describes the name as a ‘weird shadow’ over the group. He laughs as he says that he likes it when bands change their name but admits that he doesn’t fancy becoming like the permanently retitled Oh Sees and doing it every album. ‘It’s a bit of a hassle truthfully,’ he grins, tongue firmly in cheek, ‘I might stick with this just out of laziness for a bit.’

One thing you couldn’t accuse the band of being is lazy. Even in this five-year period between ‘regular’ studio albums, they still managed to fit in a BAFTA-winning game score for Disco Elysium. The game — written and designed by Estonian novelist Robert Kurvitz — became a cultural and critical phenomenon upon its release. Today, describing his relentless pursuit and persuasion of the (initially reluctant) band, Scott admits he could be tempted into doing something similar in the future. ‘It was always an inventive nice idea,’ he says, though his attention is more on doing film scores in future. ‘We’ve done live film scores and had a go here and there with little projects,’ he states before moving smoothly into a hard sell. ‘I’d really like to do that, but no one’s asking! We’ve won a BAFTA now, and we’re quite experienced. We’re in a good place to deliver really good, interesting, alternative, successful music.’ With the likes of Mogwai already straddling both elements, it is easy to imagine Sea Power following in their path. I ask the self-professed movie fan what kind of movie he imagines the group soundtracking and receive a surprising answer. ‘Pig with Nicolas Cage was good, he’s still a really good actor. I’m a big fan of his. I don’t want to do one of his shit films where they just grade everything murky grey.’ Film studios, consider yourselves warned and bring only good Nicolas Cage movies to these doors.

With the dust settled on the name change, and a triumphant release in the bag, Sea Power’s eyes have turned towards returning to the stage once more. The band did manage to get a few shows in during October of last year, and now have a London headline at The Roundhouse to look forward to. After the turmoil and tribulations of life as a band in the last couple of choppy years, Scott is finally looking to these shows and album release plans with a sense of optimism, the next journey already on the horizon.

Everything Was Forever is out 11 February 2022.