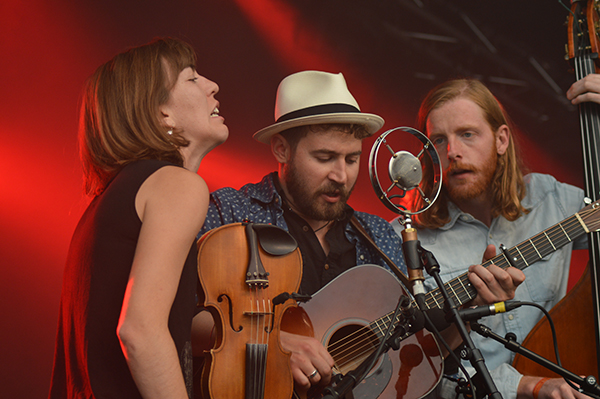 
The event takes place at the compact Cherry Hinton Hall site where they still manage to pack in two large stages, a small, atmospheric Club Tent, a free satellite stage called The Den plus workshops and children’s activities.

The backbone of the festival is British roots music and this year the impressive line-up included Bella Hardy, Olivia Chaney, Josienne Clark & Ben Walker, the trio of Martin Simpson, Andy Cutting and Nancy Kerr, The Unthanks (pictured below), The Demon Barbers XL and Scottish bands Shooglenifty and Rura.

The music on offer goes way beyond the domestic traditional scene with folk acts from other countries, including Irish bands Altan and Danù, Canzioniere Grecanico Salentino from southern Italy, the Amsterdam Klezmer Band XL, De Temps Antan from Quebec and legendary US folk singers Joan Baez and Peggy Seeger.

This year’s crop including rising young country star Angaleena Presley (pictured below), renowned Nashville singer-songwriter Gretchen Peters, the sophisticated virtuoso bluegrass of Punch Brothers, the astonishing voice of Rhiannon Giddens (pictured below), the punk-infused mountain music of The Ben Miler Band and the soaring harmonies of the country/bluegrass band The Stray Birds (pictured above).

This is a folk festival in the broadest sense possible and also included a host of rock and pop bands that wouldn’t make any claim to be folk music, but they add to the party atmosphere.

The festival has a relaxed, family feel with all ages feeling at home and where folk enthusiasts happily mix with appreciative locals.

A weekend of diverse, top quality music was enhanced by beautiful weather. See below for more photos from the event.

Words and images: Michael Hingston, IT Tester, PRS for Music