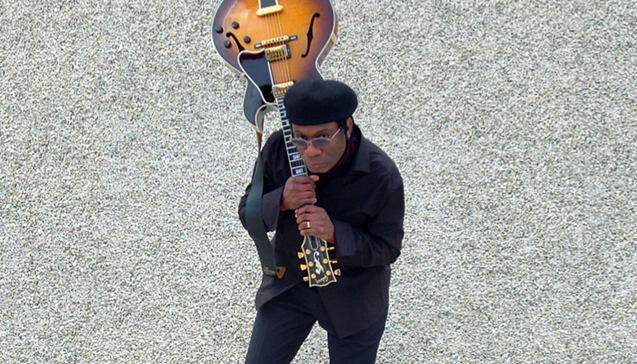 Although born in the UK, your family moved to Guyana (where your parents are from) for ten years. Did that influence your music?
Without any question of doubt, living in Guyana paved the way for my musical inspiration. I would have heard all different types of music all the time. Guyana is not particularly known for having its own musical style or identity, but it proved to be a very interesting melting pot of the world's best music.

What other influences are there on your music?
Over the years I have been influenced by all the great artists, and believe it or not I adore classical music. However, there are a few bands that have left a big impression: Bob Marley, Earth Wind & Fire, Jimi Hendrix, The Beatles, George Benson & Eric Gale.

Your primary instrument is the guitar. Do you use it to write your songs with?
Every song I have ever written has its roots in the guitar because this is my natural instrument. Some times I wake from a deep sleep with a melody or words in my head and the fastest way for me to capture the is to just pick up my guitar and Dictaphone. I also use a midi guitar to record bass, keyboard, strings and some drum parts in the studio when rendering up tracks. The guitar is never far away.

On returning to London in 1980, did you have any plans to get involved in the music industry?
No! I did not think in those terms. I played the guitar just because I loved the instrument. In fact on my first ever paid session I felt I was stealing from the guy. At that time I could not work out why I would get paid for having so much fun.

What bands did you get involved with earlier in your career?
Quite a few - some famous, some not so famous but all totally enjoyable. I have to name the following bands: Family Love, The Pasadenas, The Noel McKoy Band and Geoffrey Williams, as they have taught me so much about feel, dynamics and arrangement.

It seems you’ve been involved with every underground British soul movement since the early 80s – Lover’s Rock, Brit Funk, Rare Groove, Acid Jazz, Street Soul… do you draw on those experiences when you write your own songs?
I think any good writer must in some way draw on experiences that go right back to the first song they ever liked or heard. I believe my impulse to write from my heart is way stronger than the writer who can tailor a song to fit any particular situation or genre. I am always astonished when my associates tell me from time to time that my latest pop tune is in fact a soul/jazz track. Anyway I think it is a good thing that today’s musical boundaries are blurring.

You’ve also worked with many mainstream pop acts, do you alter the way you write depending on the performer?
A lot of the time yes. When I am writing with or for a particular artist, my whole approach changes to bringing out whatever they have inside that they want to explore. This way of writing is diametrically opposite to the type of writing that I do on my own album, nevertheless as a producer and writer it has proved to be a vital skill.

Who would be your dream songwriting partner, and why?
Wow, that’s really hard to pick one. There so many good writers out there… okay it would have to be Mr Paul McCartney - I just love the way all his tracks are put together, I have been a Beatles fan forever.

Your song Silent Hero was featured on the soundtrack to the Spike Lee film, Clockers. How did that come about – was the song written to fit the film or was it an existing work?
I remember being on a Des'ree tour in Australia, suffering from extreme jet lag in my hotel room and picking up my guitar whilst thinking, ‘Oh my God I'm down under’. It was the furthest I've ever been from anywhere. With that in mind a chord progression developed which I could not stop playing on sound checks. At that time Des'ree and myself would always be jamming ideas. Unknown to me, Spike Lee had approached Des'ree for a song to feature in his forthcoming movie. Des'ree met him and sang the song to him acapella and the rest is history. This was the first song I wrote with Des'ree and showed we just might have a good song writing chemistry.

You co-wrote half of the Des’ree album Supernatural, which remains the artist’s biggest selling album. The songs on that collection are charged with positivity, is there a story behind that?
As a musician, touring all over the world is such a fantastic experience. If you make an effort to leave the comfort of your hotel room on days off you can truly discover first hand how parts of the world differ from one another, or indeed what parts remain the same. Creatively, this environment is perfect for the way my head works and I am pretty sure that’s the reason the songs are positively charged. On Supernatural, most of the ideas where developed whilst on the road. Coincidentally Des'ree remains a fixture on radio playlists through out the world, so it all makes sense.

What are the inspirations for the songs on your current album, Living In The Moment?
Living In The Moment is really all about the hectic times we are all living in. No-one has the patience any more to take in simple every day wonders that are all around us. Everything has been sped up so unnaturally to the extent where even kids expect to edit out the so-called boring bits of anything and cut to the chase. Musically my aim was to reduce the amount of stress and induce a feeling of optimism for the listener.

What is your favourite song, and why?
Can I pick two songs? I really love Let The Sunshine Through simply because lyrically I was trying to capture the sprit of a family holiday in Cuba, which Chimaine and myself come pretty near to getting (Chimaine is on vocals). The title track Living In The Moment because it just sounds like a quality, seasoned and mature piece of music.

Where can we next see you perform live?
The hard copy version of this album comes out at the end of February so I am pretty sure there will be some dates published on my website: www.princesampson.com
Features
Back to top