Will Gregory talks about projects away from Goldfrapp

Composer, saxophonist and keyboard player Will Gregory has long been known as one half of the award-winning electro-pop duo Goldfrapp, alongside the enigmatic Alison Goldfrapp.

However, over the years he has composed film scores, played sax with both Portishead and Spiritualized, and more recently, composed an opera for the BBC Concert Orchestra. 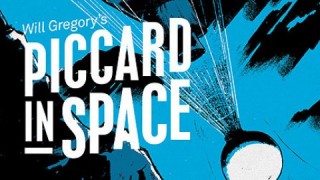 His relationship with the BBC Concert Orchestra started in 2007 when they teamed up for a performance of his score to Victor Sjöström’s 1924 silent film He Who Gets Slapped.

Earlier this year, Gregory's opera Piccard in Space made its debut at London’s Queen Elizabeth Hall. Arguably his most ambitious work to date, the opera charts the adventures of Swiss physicist Auguste Piccard.

In 1931, Piccard, who was determined to prove Einstein's theory of relativity, locked himself into an aluminium capsule attached to a balloon and reached the stratosphere.

Here, Gregory talks to Anita Awbi about composing for film and opera, and examines the invaluable skills that pop musicians can bring to new genres.

What got you into composing for TV and film?

It was through the conductor Charles Hazlewood. When I met him we got on and shared a lot of common tastes in music. At the time he was the principle conductor for the BBC Concert Orchestra and he was searching for people to work with outside the classical sphere. It’s one of his big things, to synthesise people from all different walks of musical life to try to break down those barriers. He said ‘Look, I’ve got an evening with the orchestra if you want to do something with them’. In the end I decided to do a silent film live thing. We did that about four or five years ago.

They came back a couple of years ago and asked if I had any other ideas for another evening. So I thought, ‘Why don’t we try something else’? Maybe a drama where everything is taking place in front of you? And that seemed to be what an opera is, so it went from there…

So, in a way, you fell into doing these things?

Well, I think life’s a bit like that, isn’t it? Whenever I’ve had targets or goals I’ve usually not managed to achieve them. Someone says, ‘Do you fancy doing this or that’, and you find yourself saying, ‘Oh my god, yes!’

But I did really want to do an opera. I’ve done a lot of work with silent film and I think it’s a fantastic medium, and watching it with live music is great. But it feels like there is an emotional cap on the whole procedure because obviously you’re trying to breathe life into actors who are usually long-dead, on jumpy images on the screen. And they are not there with you, which in some ways can be slightly frustrating. It’s great, but I wanted to try a drama where everyone was in the room and you could just all be there together, responding to each other.

So how does that process differ? Opera must be completely different to soundtracking a silent film or working on an album. How would you approach an opera?

With a silent film, someone else has worked out the script, the scenery, the aesthetic of the production, and you are just given everything on a plate. The music is the last part of the jigsaw. Opera is more like writing an album, because you’re coming up with something from scratch. But with an album, the way me and Alison work is to feed towards something that is nebulous to begin with, and gradually gains its own identity as its going, in a slightly improvised way, which is a lovely way to do it. Also you’ve got the time - it’s finished when it’s finished.

You are freer working on an album, because it’s your own brief?

Yes, exactly. Which is lovely. If you’re not happy with something then that’s fine, just take another month out, etcetera. Obviously with an opera you need to find a story if you are going to write it from scratch, which is what I wanted to do. I wanted to do it about a crazy scientist from the 30s who had gone up in a balloon. We needed to research it and find out as much as we could about him. And I had to work with a librettist, Hattie Naylor, and I’d never done that before, to try to synchronise my ideas with what was ultimately going to be a script that she would produce.

Everything has to be planned out in advance. You have to build the whole thing like a scaffolding structure that you’re going to hang all the music on. You have to know pretty much all about it before you start.

It’s difficult because you have to be a dramatist, and in that sense I’m not. But then, of course, there’s the other bit, where you work with singers who are outside the pop tradition and who have a whole different set of criteria to do with their range. Opera singers have very specific bands of range. You have to work with them, it’s a collaboration.

So you had to pick up a whole new skill set on the job?

Absolutely. Eyebrows were certainly raised a lot of the time. But they were lovely because they would just take me aside and say ‘Now Will, look, I think if this was here and that was there’.

What’s it like working with conductors, opera singers, huge orchestras? Do you find yourself taking on more of a managerial role?

Yes, you are faced with many elements to pull together and you can’t pull them all together with the same bit of string. Charles is easy; he’s very used to working with musicians from all sides of the tracks, so that’s why I really wanted him to conduct it, even though he is not their principle conductor any more.

Were there people who were specialist in their particular area that you could draw on to help bring it all together?

There was a support network, it would be terrifying if not. It turned out to be a wonderful troupe that I’d become part of. I think we were very lucky. We all came together and it was a marriage made in heaven.

What do you get out of it?

All these vaguely musical ideas became three-dimensionally dramatic intentions, and that was the most amazing part of the whole thing. Seeing it start to come to life, and breathing life into characters.

Earlier you said Charles Hazlewood is interested in engaging musicians from the pop world and other places too. What do you think those musicians can bring to the classical sphere? What are the benefits of crossing over?

The benefits are that you start to realise that what you are trying to do is really the same thing as what everyone else is trying to do that is involved in music. In the Harvard dictionary definition music is an organisation of sound. Therefore that’s what everyone is trying to do. I think in this country we are rather ghetto-ising in our musical genres though I do think some people manage to break out.

I think that the expertise of pop engineering, mixing and production, and the writing still use notes; it’s about harmony and melody. Classical people are rather disempowered from their creative possibilities because very often they have to reproduce what’s on the page and although that is an amazing thing to be able to do it sometimes feels like classical people from the past would improvise. Beethoven was a fantastic improviser.

I think that there are whole parts of ones mind that don’t get fostered by just one musical genre and I think particularly with classical music there is can be a lack of improvisation, or creativity, or composition. If you go to a music college you can just get away with doing your scales, arpeggios and your performance pieces. No one is going to sit you down and say ‘Right, give me some music from scratch.’

I think there is a lot of safety and sterility that comes from inhabiting one place because you are not expected to do the other thing. Having said that, a lot of pop musicians can’t read music which means they can’t participate and have access to seeing how other bits of music are put together. You can hear it, of course, but you can’t participate in music-making in the same way.

What do you enjoy the most out of the film scores and opera work you’ve done?

Getting to work with a large collection of musicians is very exciting. It’s an exciting musical vehicle. Most of my life I’m spent – as I’m sure a lot of people are these days – in front of a computer, trying to breathe life into midi mock-ups of what you actually intend. So I think when you have 30 string players all playing a line together with the musical tension that is running through what they are playing, that is a very exciting and rather addictive resource.

Do you have any advice for musicians thinking of moving over into this kind of composition?

I think all you can do is prepare yourself by investigating all different sorts of music and being open to it. And listening to different things and maybe not being satisfied with any kind of formula you think you might have – which is a difficult thing to say because obviously people want to have a musical identity. I think a musical identity is not the same as a musical formula and therefore you have to keep recharging the batteries to keep yourself fresh. And I think that the only way to do that is to keep inputting different sorts of music and not getting comfortable with your own small world. Try to put yourself somewhere where you’re not quite as comfortable and maybe you are continually stretching yourself and not being afraid to do that.

In one’s most cynical moments, people have asked for advice, and you start off by asking ‘do you have any relatives in the business?’ Play whatever contacts you have as hard as you can! Obviously that’s just the case and its how the world works. But at the same time, it’s also about luck. And that means being ready for something. If something is going to happen for you, it doesn’t need to happen more than once. Once you’ve had that breakthrough your life could change and you’re busy. You’re off. Therefore you can’t let yourself get too down that it hasn’t happened yet because it could just be like someone throwing a switch when it does. You should just get on with your mission.

This interview was conducted for the M magazine feature Popping Out, which will be published online in the coming days.
Features
Back to top