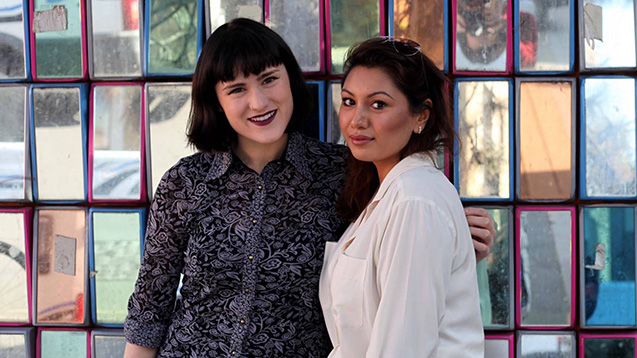 Vivid Glow's Chloe Alice Frieda and DEBONAIR dig deep into their record bag to pick out current faves and all-time classics. Wrap your ears around their warm electronic nuggets...

Vivid Glow are Chloe Alice Frieda and DEBONAIR, a DJ tag team who throw switched-on parties around the capital, host shows on NTS Radio and release hot wax via the Alien Jams imprint.

Mashing together vintage electro and techno with post-punk, acid and new-wave, theirs is a broad church, focused on the wonkier end of club culture.

Having shared bills with the likes of Nidia Minaj and Lena Willikens, and with past form on BBC Radio 6 Music and Resonance FM, the pair are well equipped to get dancefloors bumping.

Here, they dig deep into their record bags to pick out their current faves…

Rings Around Saturn - Synchrotron
Beautiful little electro track released on Firecracker's sublabel, Unthank. It is a project by Rory McPike aka Dan White.

Alexander Robotnick - Problems D'Amour
This has been a long time Vivid Glow favourite, the entire record Ce N'est Q'un Debut is a classic.

Junior Loves - Conclusion (Ignacio's solution)
We are fans of Kestral Explorations, an NTS show by Junior Loves and Scientific Dreamz of U, both amazing producers in their own right. Junior Loves’ latest release on Tabernacle is also highly recommended.

Borusiade - Confutation
We brought Borusiade over from Berlin for one of our parties last year. Her new release is on Cititrax is a 12-inch split with The Sixteen Steps. Confutation is an epic techno mutation with Borusiade's unique vocals interjecting throughout.

Lanark Artefax- Touch Absence
Was really into Lanark's release on UIQ, as well as this one on Whities – a powerful track with a satisfying beat and lush melody.

Wilted Woman- LKA
Wilted Woman has a new release coming out on Chloe's label Alien Jams next month. WW's live sets are amazing, and her sound is totally unique. [unfortunately we couldn't find this one on Spotify]

Bill Converse- Position of Home
This release came out on Dark Entries earlier this year, called The Shape of Things to Come.  I love how this track progresses, with fuzzy beats and a tropical vibe, throughout euphoric synths.

Vivid Glow pull into Cosies, Bristol, on 25 November for another night of off-kilter mayhem and filthy beats - tickets and info.