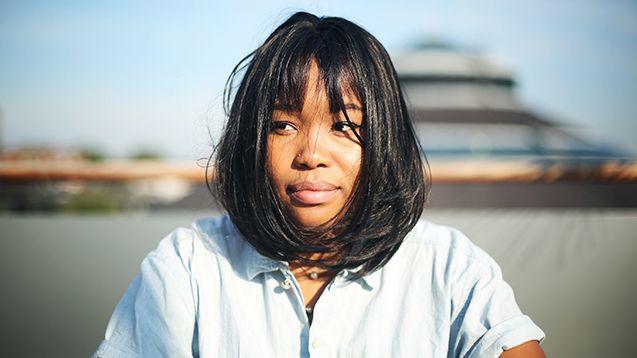 The new, boundary-pushing platform for under 30s launches this weekend. To celebrate, Station Manager Niccy presents an ace playlist of 'femme British artists that should be on festival bills'...

Powered by the Roundhouse, Camden, the boundary-pushing platform is made up of over 50 presenters and producers, led by an all-female management team.

If you're looking for content that challenges the norms of radio, then step right this way: here, you'll find honest, accessible discussions that don't pander 'to populism or party politics'.

Station Manager Nicole 'Niccy' Logan (pictured) is at the heart of it all. A proud Brit School graduate and freelance documentary maker, artist manager and live events producer, her work focuses on creating welcoming environments for QTIPOC people and their collaborators across all artistic disciplines.

Broadcasting from the heart of Camden's Roundhouse, the station launches tomorrow (3 March) and we can't wait to tune in.

To get you in the mood, Niccy has put together a banging playlist for us, centered around 'femme British artists that should be on festival bills.' Scroll to the bottom to listen...

Hijira – I Don’t Belong to Anyone
Gusty, intelligent, empowered vocals, over a deeply stylish and funky beat. A friend put me on to the track and the artist and I’m obsessed! I want to be able to walk through life with the confidence this song projects.

Elkka – Control
Love the whole Femme Culture movement (Elkkla’s label). Let’s get more femmes empowering more femmes to get behind the decks and the engineering desks and making addictively reflective tunes such as this.

Flohio – Bands (not on Spotify - listen here)
The energy with which this MC moves across bars, is like watching an athlete take to the track: pure energy and personality-packed articulation. It’s like she’s been doing this for years and then I realised she’s only 16... WHAT!

Iamddb – Shade
Go into any hiphop/ grime party in the UK right and play the first two bars of this track – you’ve just shut down the whole rave, or started one. Totally of its time, what a way to announce yourself and claim space in such a male dominated arena. I’m excited to see what happens next with her.

Mina Rose – Kingdom
Tripped out, poppy melodies that are a bit darker and bassier than what’s currently in the charts. It feels really sophisticated but in a way that would also feel totally at home in a grungy legal rave.

Biig Piig – Vice City
Gorgeous tone and a refreshing take on trip-hop jazz. Love a vocal that sounds wise beyond its years but has a youthful energy.

ELLE – Dancing in Fire
Elle’s giving me early Sade with a husky lilting tone that is so arresting, it makes you pay attention to it, totally not mad. Plus the video is so cute!

Nabihah Iqbal – Something More
That opening guitar riff will stay in your head all day, with dreamy filled synths and pretty airy vocals. I love how abstract it feels, both an homage to the eighties but also a futurist utopia.

Lava La Rue – Biscuit (not on Spotify - listen here)
Super fun, Soundcloud/Instagram generational anthem – get you out of bed in morning and gass you up enough to take on the world. Lava has so much creativity, whether it's designing clothes, music or modelling. Her work feels super connected to a whole world of youth culture right now and as I said, it’s just super fun. Ice cream emoji.

Tawiah – Recreate
It’s only the intro to the EP of the same name but it is vulnerable, gentle and human. I think Tawiah has a really lovely way of dealing with language: she straddles poetry, spoken word and more traditional RnB songwriting in such an effortless way. I had it on repeat for hours., it took me a while to listen to the whole project.

BONUS: Not British but so brilliant, it's worthy of a mention... Raveen Auroua – If Only (not on Spotify - listen here)
Gorgeous everything – tone, melody and delivery. It's catchy without being repetitive and feels like a proper fleshed out pop song without being dated. Fab.