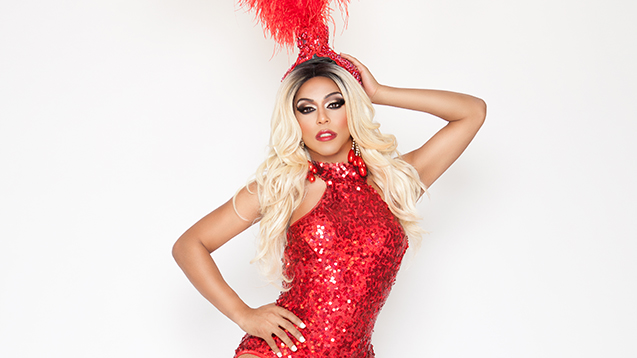 The RuPaul's Drag Race superstar shares the songs that have soundtracked her life. Tune in here for pure pop extravaganza...

RuPaul's Drag Race royalty Shangela Laquifa Wadley has appeared on our screens no less than three times now, slaying a trio of seasons to become a cult fan favourite.

The Texan superstar – otherwise known as DJ Pierce – made her debut on Season Two, a mere five months into life as a drag artist. While she didn't last long up against the seasoned queens, her quick-witted charm and go-getting spirit landed her a second chance on the next season, followed by a place on All Stars 3 earlier this year.

Outside of her own show-stopping stand-up tours and worldwide performances, the death-dropping, vogueing queen is the founder of LGBTQ booking and management agency Say What Entertainment and is a supporter of the LGBTQ Center in Houston.

Her passion for drag and acting has seen her guest-star on the new season of The X-Files and crime drama Bones, while she's also set to appear in the upcoming remake of A Star is Born, starring Bradley Cooper and Lady Gaga.

With new club single Pay Me out now, here, Shangela lets us in on the songs that have soundtracked her life.

All together now: halleloo!


The first record I ever bought was…
Mariah Carey’s Music Box. I loved it; it had Dreamlover and, oh – Mariah Carey I love you so much!

The song that should’ve been a hit but never made it is…
Anything by Nicole Scherzinger never really reached, I think, the height that it should have. It was amazing.

The last great record I listened to was…
Dua Lipa’s new album. I think it is amazing.

The song/piece I wish I’d written is…
I wish I would’ve written I Will Always Love You because Dolly Parton is cashing checks honey!

The song/piece that makes me cry is…
Honey I don’t have time to be sitting around crying; I’ve got work to do.