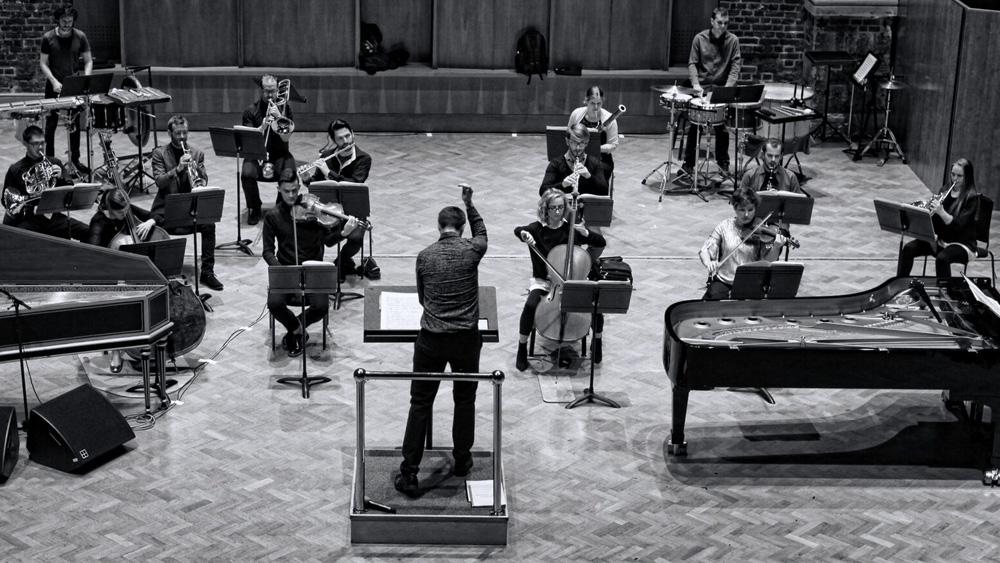 Ahead of the performance the ensemble have curated a playlist of influences and relevant recordings.

Riot Ensemble are set to perform the London premiere of Solstices, a 70-minute piece composed by Georg Friedrich Haas which takes place entirely in darkness.

Ahead of their performance the ensemble have curated a playlist of influences and relevant recordings, and their viola player Stephen Upshaw explains why they chose each track…

Georg Friedrich Haas – In Vain
Hailed by Sir Simon Rattle as one of the great masterworks of the 21st century, In Vain, written for our friends Klangforum Wien, is one of the composers first forays into music to be performed in darkness.

Georg Friedrich Haas – In Nomine
A beautiful miniature which shows another side of Haas’ music - still, expressive and meditative. Solstices combines the time scale, microtonality and darkness of In Vain with the zen quality so beautifully demonstrated here.

Jack Sheen – Television Continuity Poses
Jack is a wonderful young British conductor and composer who has written two pieces for us - one featuring our violist Stephen Upshaw and one featuring our violinist Sarah Saviet, which features here. We performed this piece live on BBC Radio 3 and it’s fresh, expressive and restrained aesthetic serves as a beautiful compliment to the rest of this playlist.

Anna Thorvaldsdottir – Shades of Silence
Another track recorded at Real World Studios (Peter Gabriel’s personal studio) from our Chest of Toys record, this piece represents all that we love about Anna’s music. It’s icy textures evoke Icelandic landscapes - fitting for the Haas as we’ll be giving the world premiere of Solstices at Dark Music Days in Reykjavik January 26th!

Lee Westwood – Florescence
Lee is a Brighton-based composer and guitarist who has been close to the ensemble since its inception. We’ve enjoyed a wonderful relationship with New Music Brighton and their network of composers over the years and this fascinating piece for an unusual and highly effective instrumental combination is one of the many works born from this collaboration.

Rebecca Saunders – Molly’s Song 3 ‘Shades of Crimson’ / Fury for double bass solo
We’re thrilled to have recently completed the first recording of 2019 Ernst von Siemens Prize-winning composer Rebecca Saunders’ Stirrings Still II which will feature on our upcoming album Speak Be Silent to be released soon on Huddersfield Contemporary Records. These two works brilliantly demonstrate her vast imagination and colour palette with even the most intimate of forces.

Elliott Carter – Double Concerto for Harpsichord and Piano
The Riot Ensemble has very close ties to the USA. We have three American members, regularly commission young composers from the States and composers from elsewhere based in the States (like Haas) and aim to bring music from the USA to the UK and vice versa to create what we hope to be a ‘special relationship’ in musical terms. The Carter Double Concerto is a mammoth 20th century masterpiece which we took on last season in a sold-out concert at LSO St. Luke’s - one of our more memorable concerts to date!

Clara Iannotta – Il Colore Dell’ombra / Dead Wasps In The Jam-Jar
A wonderful example of the forefront of the composers of the new generation, Clara is another brilliant European composer with connections to the USA (where she was a student of our friend Chaya Czernowin at Harvard University) whose inventive and visceral music features on concert stages across the globe. We have played several pieces of hers in recent years and have lots of exciting plans with her for the future – stay tuned!

{ ; } }
Riot Ensemble's performance of Solstices takes place at The Royal Academy of Music on 29 January.