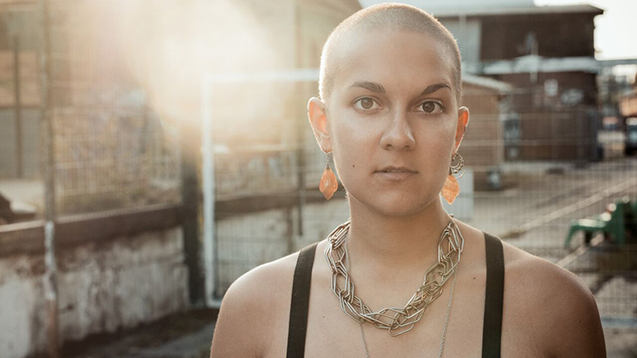 Acoustic songwriter turned pop minimalist PILLARS dove head-first into the world of electronica with her first home studio set up and hasn't looked back since. Tune in here for an eclectic mix of tracks that inspired her EP...

Acoustic songwriter turned pop minimalist PILLARS dove head-first into the world of electronica with her first home studio set up and hasn't looked back since.

With no influences or preconceptions of the genre, she says she entered the world of production 'blind', adding: 'What was was really exciting was that I came out sounding like...me.'

Mining dark and sparse production with her soulful vocals, her EP Honest People landed in December and has already landed praise from the likes of The Line of Best Fit for its 'beautifully haunting' sonics.

It's a personal and intimate set of songs, written around her experiences with mental health, each at a different stage in her recovery.

'It’s about me opening up and becoming completely honest with myself, admitting I had a problem and facing it head on,' she says of the provocative title track.

Here, PILLARS lets us in on some of the songs that influenced the EP. Tune in below for an eclectic mix of folk rock, trip hop, electronic pop and more...

The Pugilist - Keaton Henson
When writing the EP I was struggling to put into words the dependence I have on art even during my darkest moments. Like many artists, I’m an attention seeker, and the dependence I have on receiving attention in combination with my need to create can take me to some really troubling places. The Pugilist put into words exactly what I was itching to. I knew I would never be able to say anything as powerful as Keaton Henson had penned and so I ended up covering this track on my EP. It’s beautiful and never have I related to a track so closely.

Woman - Rosie Lowe
I had Rosie Lowe’s album, Control, On repeat whilst writing my EP. The production of Woman really influenced the way I produced my vocals on Honest People in particular.

Hawaii - Ainslie Wills
I love Ainslie Wills’ melodies - not predictable in the slightest - another track of hers, Constilation, I had on repeat whilst writing my EP. The production on the drums of this track is really clever too - it adds so much to the build of the track which I was really diggin at the time.

Protection - Massive Attack
If you listen to the use of reverb and delay on the snare hits of this track you can hear how varied it is. This was a key feature of Honest People in particular. We had loads of fun with reverb on this track! I also love the simplicity of the melody on this track - no need for frills. Beautiful.

Weight In Gold - Gallant
Wait for the synth in the chorus. The way it’s choked to let Gallant’s voice ring out it’s so dramatic! When I was writing Soul-D I wanted the guitar riff to have the a similar effect.

In God’s House - Bat For Lashes
This woman has been a huge influence on me over the past few years. I was lucky enough to share a stage with her in 2014 where I realised just how much creative control she demands over her music - it was totally inspiring. The arpeggiated synths in this track are a dream too! When they open up and the organ comes in, it’s super haunting - I love it.

Because - Smerz
My co-producer, David Jones, introduced me to Smerz. They really push boundaries and I eat that shit up. Their vocal sampling is out of the box which is always refreshing. I really tried to emulate this throughout the EP.

Old Flame - Kimbra
Again - another woman who can write the most beautiful melodies. The jumps in the chorus are lush (and really fun to sing - try it!). The snare that comes in during the second verse is so crunchy too - lovely stuff. I had a similar thing going on in Soul-D but at the higher end - I really tore that sample apart!

Crystalline - Bjork
Do I need to say anything? The woman’s a hero and has inspired me since 4 year old PILLARS stormed around the kitchen singing It's Oh So Quiet.

I Remember - Saint Saviour
This lady has taught me so much. As a mentor of mine, she taught me how to embrace the voice I have and to write for it. She saw me through my toughest times whilst I was constructing the EP. Thank you.