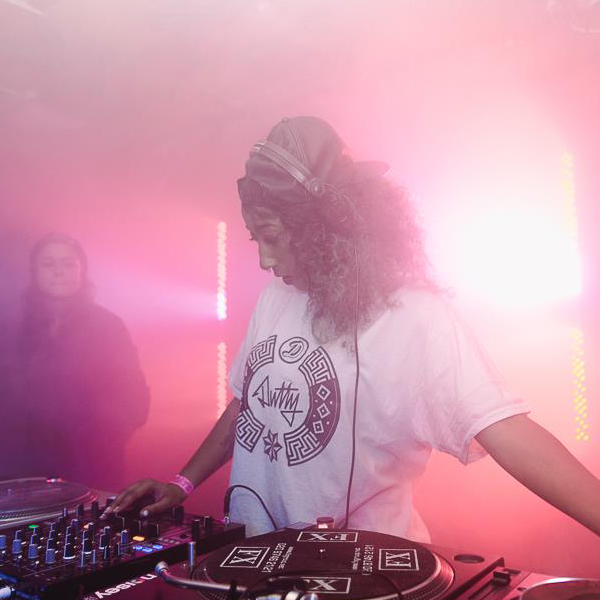 Welcome to this week’s playlist, compiled by BBC Radio 1Xtra’s Jamz Supernova. Jamz is one of the new selectors on the station, pushing new forms of bass and grime via her show and EDIT LDN club…

Jamz is one of the new selectors on the station, pushing new forms of bass and grime via her show and EDIT LDN club. Over the past 18 months, she’s established herself as a real champion of bass music, drawing on R&B, grime and hip hop to inform and inspire her sets. She’s been a regular fixture in London’s underground scene as well as playing at the likes of Bestival and XOYO. Read about her selections and listen to the playlist below...

TLC - Kick Your Game
I'm a nineties baby through and through, both my mum and dad were really into new jack swing. I remember my mum had the Crazy, Sexy, Cool album on tape. Years later I bought the album on CD when I first passed my driving test and thought I was hot driving round South East London with my seat reclined and this on loud.

Lauryn Hill - Ex-Factor
I'm ashamed to say it but when I was 15 I hated Lauryn Hill, when a friend played it I was like erghhh what is this!! Skip a few years, a few heartbreaks and suddenly I properly discovered The Miseducation Of Lauryn Hill. I’ve never looked back.

The Internet - Just Sayin/I Tried
This album is everything right now. I've said it out loud and I'll say it again! The Internet just dropped the best R&B album since Frank Ocean's Channel Orange. This is one of my fave cuts from Ego Death.

NAO - Zillionaire
I love this girl, I talk about her so much on my radio show I've had to ban myself. But honestly she's a gem and one of the finest rising UK talents.

Jamie xx - Girl
Jamie xx is such an exciting producer. He dabbles in so many different sounds you really can't put him in a box.

Mura Masa - Love Sick
This is one of my favourite producers to emerge from the future scene I have been championing. He's so talented and one of the few electronic producers you can call a multi-instrumentalist.

RL Grime - Syclla (DJ Sliink Remix)
#TrapLife ... one of my favourite genres to play out in clubs or festivals, they're something about the wobble and drop that catches people off guard but they love it. RL Grime is a pioneer in the scene, I caught him at Coachella a few years back and he literally blew my mind.

Falcons - Aquafina
Another producer on the fave list (I have a few) But Falcons is sick, he started of making remixes and sampling nineties R&B records. But now he's matured into his original sound and it's so refreshing. Plus big up Goldlink on the feature … he's one to watch to watch for sure.

Tazer X Tink - Wet Dollars (Redlight Remix)
This is such a banger. I loved it when it was just an underground club record, but Black Butter bringing Tink on board was genius. The Redlight remix just bangs, I'm excited to play this out.

Mele´- Ambience
Another club banger. This is my summer jam - it's tropical and sounds perfect in the sun. Mele is going to have a VERY good year.

Para One - Elevation
If you’re having a bad day this is the perfect track to turn it around. It's got this nostalgic old skool feel to it. I could listen to it all the time.

Julio Bashmore - Holding On (Feat. Sam Dew)
I have been waiting the longest for this album to drop … and it's now here and it's brilliant.

Tom Misch - Sunshine
And lastly I'll keep it in a happy place, leaving you with Tom Misch, another exciting young multi-instrumentalist. This is such a tune, I never get bored of playing it on radio.