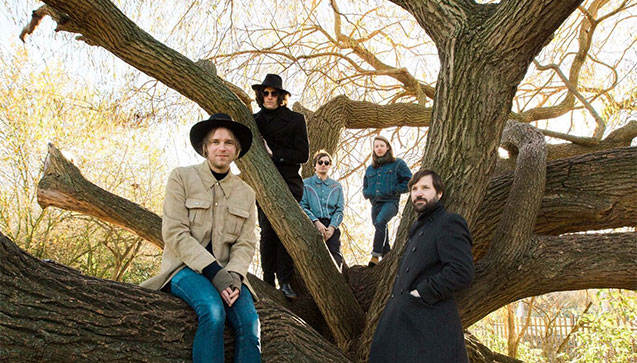 Cosmic country troubadours The Hanging Stars are back with their dazzling second album. To celebrate, lynchpin Richard Olsen reveals the songs that fuelled it...

Cosmic country troubadours The Hanging Stars have been lighting up the cosy corners of alt-folk for around three years now with a gentle glow that never seems to wane.

From their languid debut LP Over the Silvery Lake in 2016 to their captivating live turns around the capital, the five-piece channel the glory days of psych-folk with care and attention.

It’s a beautiful blend that has come on strides in their second album, Songs For Somewhere Else, which lands today (Friday) via Crimson Crow Records.

To celebrate its release, we tap frontman Richard Olsen for his top influences…

David Crosby - Music is Love
I owe this album a lot. One of my dearest friends that never lets me down. The sometimes chaotic backing of about 134 of California's late sixties early seventies finest players and songwriters will forever be a huge influence. 'Everybody's singing, Music is Love', OK mate. I'm in.

Gram Parsons - A Song For You
Sweet satin sounds of a love song. Such nerve and passion in every note. And when Emmylou comes in... Imagine walking down the aisle to this... Oh wait... Pure bliss. Breaks me every time, forever.

Anne Briggs - Tangled Man
What do you know that we don't Anne? She seems to hold a secret, good or bad I don't know, only that it's a powerful one. Much like her voice, charisma and soul. God, I wish she still performed.

Fred Neil - I've Got a Secret (Didn't We Shake Sugaree)
Fred Neil and Karen Dalton are on my wall. And I wrote a song about it.

Gorky's Zygotic Mynci - The Barafundle Bumbler
I have no idea what they're on about. Neither in English nor Welsh. But I've had this song in my head since I first heard it. And that's quite a damn while ago. And the chorus is absolute goose bump inducing perfection. Euros for president.

Fairport Convention - She Moves Through the Fair
I wanted to write about how much I love Sandy Denny too but I gotta do this on a coffee break from moving furniture around so I thought I'd kill two birds with one stone. And these are two bright, mystical, profound and colourful birds. Richard and Sandy in symbiosis. Some serious singing and interplay. Aren't we lucky that this was once made?

Margo Guryan - California Shake
Where the hell have you been all my life? Thanks Margo. You rule.

Linda Ronstadt - Rock Me On The Water
I was late to both Linda and Jackson but my lord was it worth being late. Life really can improve from time to time I suppose. I once requested this song at a recent J.B show. I had to holler 'wauder' instead of 'water' mind. He eventually understood and promptly played it though. Thanks man.

The Byrds - Hungry Planet (not on Spotify, see YouTube vid below)
I love The Byrds, all of it, even the dodgy seventies stuff. There is nothing to forgive. Roger McGuinn steered the good ship Byrds with grace through the stormiest of waters. For that he deserves the upmost respect. And when he had Clarence White by his side, well, how can you not win?

Kebnekajse - Barkbrödslåten
The name of the band is the name of Sweden's highest mountain. The name of the song is what we will be eating if this government has their way.