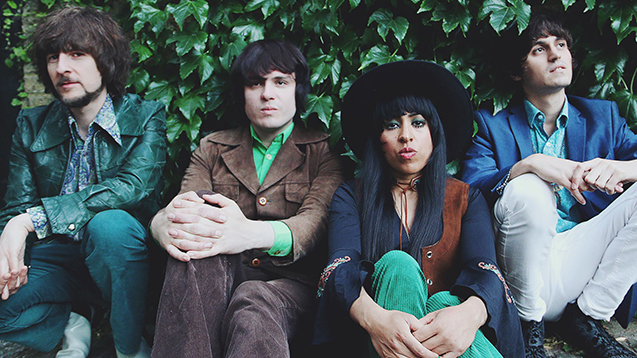 Green Seagull's jingle-jangle sound is so authentic, it's hard to believe you're not listening to a lost record from the sixties. Learn the tracks they're currently digging...

London-based four piece Green Seagull are a 21st century gang whose hook-laden, jangly sound is so authentic, it's hard to believe that you're not listening to a lost record from the sixties.

Formed in early 2016 by former members of neo-psych acts including New Electric Ride, Hidden Masters and the Magnetic Mind, at the heart of the quintet's baroque-meets-freakbeat sound are its flawless Byrds-esque vocal harmonies that masterfully weave in and out of the song structures.

Drawing upon influences such as the Left Banke, the Kinks and the Association, the band have been making waves with their embellished pop, gaining support from the likes of Mark Radcliffe, Gideon Coe and Marc Riley on BBC Radio 6 Music.

Debut single Scarlet / They Just Don't Know was released in June this year on Megadodo Records and has been followed up with newest cut (I Used To Dream In) Black and White, out in November on limited edition white vinyl.

With a debut album set for release in early 2018, here, the band select the tracks they're currently digging.

Scroll down to the bottom to hear their tasty selection in full...


The Holy Mackerel - Scorpio Red
Excellent early outing from Paul Williams, we particularly like the harmonies and subject matter, not to mention the unusual instrumentation (harmonium and 'marxophone').

Gandalf - Golden Earrings
A dramatic echo-drenched re-imagining of the old jazz standard, and the opening track on one of greatest psych albums ever made. Gandalf are a huge influence on the Seagull!

The Seeds - The Wind Blows Your Hair
It starts with one of the best organ hooks ever and the combination of the organ with the Wurlitzer electric piano gives it an extra dimension.

23rd Turnoff - Michaelangelo
Brilliantly woozy orchestral psychedelia from Liverpool's lost songwriting genius Jimmy Campbell, and as profound a meditation on posterity and obsession as you're ever likely to hear.

Iron Butterfly - Most Anything That You Want
Possibly the 'heaviest' bass line ever committed to record, excellent VOX Continental riffing plus fuzzrite guitars ensure this is a firm favourite.

The United States of America - The Metaphysical Circus
We love the deadpan vocal stylings of Dorothy Moskowitz, and the descending patterns on the electric violin make you feel like you are falling down through a very large hole!

Mayfly - Blue Sofa
A charming slice of McCartney-esque folk pop from Belgium in the early 70s - this guy really likes his furniture, possibly too much! He's a gardener these days apparently...

The Rose Garden - Long Time
One of the few songs Gene Clark (of the Byrds) wrote for another act, and easily one of his best. The extraordinarily low-pitched vocal stylings of Diana DeRose add a haunting dimension to the dense, kaleidoscopic lyrics and mournful melody.

21 Oct - Crossfire at 229 The Venue, London
Features
Back to top