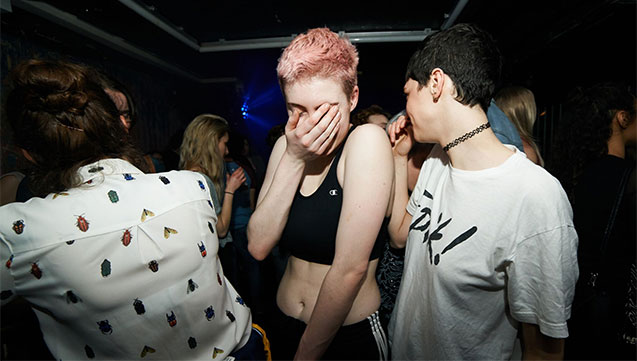 Michelle Manetti is behind Fèmmme Fraîche - a girls-galore, no-holds-barred bi-monthly clubnight of disco debauchery and all-out electronic warfare. This week, she curates our playlist...

Fèmmme Fraîche are responsible for some of the most jacking parties this side of eighties' Chicago.

With guest DJs including US trailblazers Miss Honey Dijon, Lauren Flax and Alinka, their forward-thinking feet-first policy has punters shaking from dusk til dawn.

Cooked up by DJ, vocalist and producer extraordinaire Michelle Manetti and Sandra Le, their bi-monthly night is a rare sight to behold.

Here, Michelle tells us about the tracks she's currently digging most…

Alinka - You're Basic (Lauren Flax Remix)
Alinka and Lauren Flax have both been guest DJs for us, both from the US and two of our fave DJs. Two super solid producers as well. This track was my introduction to Alinka and I fell in love with the intro immediately. Just love the jackin' sound and kitschness.

Sky Deep & La Fraicheur - What You Give
Another collab from two previous guest DJs, Sky deep and La Fraicheur, who are both based in Berlin. Sky does some really amazing projects supporting marginalised groups which you should check out, another kitsch jackin' house jam.

Honey Dijon Ft. Seven Davis Jr - Houze
It was a pleasure to have the incredible Miss Honey Dijon play for us in January - our wildest party yet. Not only an unbelievable DJ (one of the finest around right now!) but also huge icon for the LGBTQI community, and this track also shows her talents as a producer - more fine jackin' house.

Gina Breeze - Disco Hoe (W. Jeremy's Hoeing Disco Remix)
Gina was one of our warm-up DJs, but she's one to watch right now. A very talented up-and-coming producer/DJ, who’s a fave on the Manchester scene with an exciting future.

Peaches - Pickles (Lauren Flax Remix)
Another one from Lauren Flax, this time a remix of Peaches, who is a huge queer girl icon. We couldn't make a playlist without including at least one Peaches song and Lauren's remix is a fine example of acid-tinged grrrl power!

rRoxymore - Organ Smith
rRoxymore is another Berlin based DJ/producer who came to play for us. I absolutely love this track and have played it at many of our parties. It really embodies the sound of Fèmmme Fraîche - jackin', dirty, sweaty, pulsating house music.

Alinka & Shaun J. Wright - Time For Action
We play a lot of Alinka's tracks at Fèmmme Fraîche. She's churning out some outstanding music, so it was hard to pick the best, but this one with her music partner Shaun J. Wright (previously of Hercules & Love Affair) seems fitting in the current political climate. It was released on Heidi's Jackathon Jams label, who's also another incredible DJ and power female!

Nightwave - Nightlife
Glasgow-based Nightwave is better known for her footwork, juke and upbeat Jersey club sounds, so she bought a different flavour to the basement when she played; up-tempo, up-beat jams, just like this one.

Lauren Flax Ft. Sia - You've Changed
This is the third track from Lauren Flax on our list, and it track was my first exposure to her sound. She teamed up with Sia (before she was big) for a deliciously fun, soulful, electro-pop number.

Kim Anh - Shadows
LA-based Kim Anh is a good friend of ours, known for her incredible queer girl parties in LA, as well as being a talented eclectic DJ and vocalist to boot. She'll always come play for us when she's in town and never fails to bring the best party vibes.

Meggy - Touch It
Finishing off the playlist with some sun-drenched sounds from Berlin-based Meggy, who played at our third party. Soulful and summery.

The next Fèmmme Fraîche takes place on 9 September at Dalston Superstore.