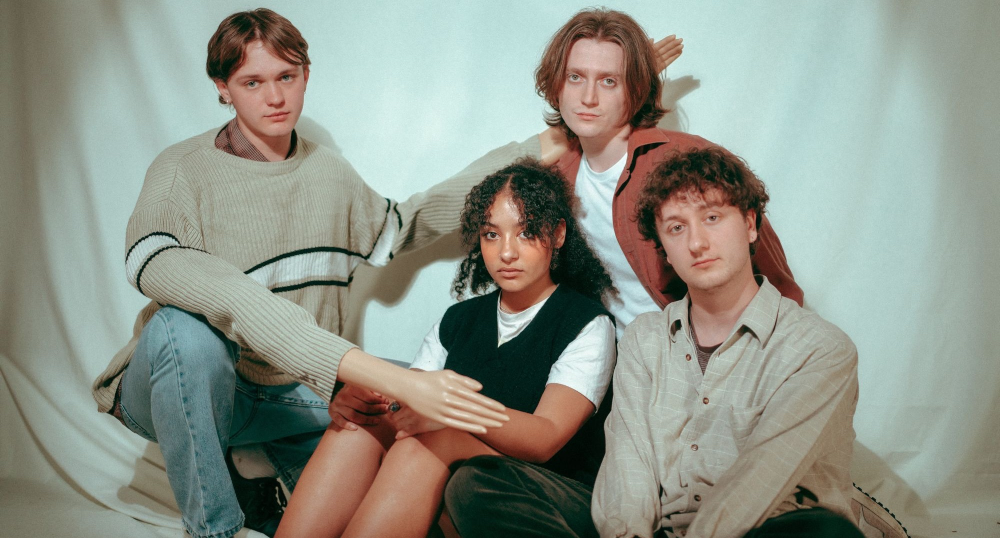 Following the release of their debut EP Polyawkward, we asked Leeds four-piece English Teacher to make us a playlist.

Newly confirmed to support US indie icons Yeah Yeah Yeahs on their UK tour this summer, the band’s unstoppable rise shows no signs of easing anytime soon, with their own debut UK headline tour also lined up next month, followed by countless festival dates and autumn shows with fellow Yorkshire stars Yard Act.

Detailing the EP, bandleader Lily Fontaine revealed: ‘Polyawkward is a journey of self-discovery around supermarkets, along pub crawls, through lockdowns, space, time, hooks and wonk.’

Following the release of the EP, we asked English Teacher to make us a playlist. Tune in.

Sorry - Right Round The Clock

I think the female and male doubling is such a sonically satisfying and unique timbre, and on songs like A55 and Good Grief we were influenced by how Sorry get it right. Also, their songs have an accessibility in their catchiness, while still remaining alternative, and this was really important for us when creating Polyawkward.

Sticking with lyricism, I’ve always admired Richard Dawson’s ability to discuss deeply personal and real experiences with such wit and honesty. Word-play and imagery that can make me laugh while still being beautiful, has my heart. Lines like ‘I know I must be paranoid/When I pick up the groceries/One of the girls who work the check-out/Tuts under her breath and it destroys me for a week’ show that you don’t have to dive into a thesaurus or get wrapped up in metaphor to make an impact.

The way Black Country, New Road switch up the feel of their tracks mid-song with dynamically, musically, and rhythmically contrasting sections, alongside the inclusion of orchestral instruments, has, for me, taken guitar music to a new place that’s more akin to theatre than guitar music at all. In all honesty, I’ve really struggled with bands and guitar music recently - a lot of music sounds the same to me, and what I love about For The First Time, is how each song and each section of each song, contrasts completely with the next. The way sunglasses travels through different acts, and how each act seems to match the lyrical content, is truly inspirational.

Micachu and the Shapes - Calculator

Jewellery is one of my all-time favourite albums.  I just love how bonkers it all is, Calculator is all over the place, but somehow through all the chaos they’ve managed to create an impeccable pop tune. This is something we try and emulate where we can, making music that’s accessible but also has moments that slightly disorientate you. Plus the majority of the songs on jewellery are centred around a little nylon string guitar (The best sounding in my opinion), which is what a fair few of our EP’s guitar lines were written on. It made its way onto a few tracks too.

Whilst we were recording the EP, I was obsessed with both of Oh Pep!’s albums. I can’t say they directly inspired the songs on the EP (not consciously anyway), but I would listen to them almost every single day. Recording can get intense so to have a band like this to escape to is something very special. I love every single song by this band almost equally so it’s hard to pick one, but Afterwards would be stuck in my head the most. Lily and I would often sing it in the kitchen which probably pissed everyone off. They’ve disbanded now which is such a shame, two of the most talented songwriters out there In my opinion.

Morgan Simpson from Black Midi is the greatest drummer on the scene right now. Once saw him play at a battle of the bands when I was 14, he’s a beast. His approach is so unique and technical I love it so much. Black Midi’s chaos is something I really admire (although it can get somewhat overbearing). I thought how this song ended was so cool, a sudden cut with that falling synth tone. We basically stole that and put it over the last chorus of Mental Maths.

A journey of discontent and reflection. A  beautifully crafted album, largely produced by Mitchell featuring fantastic musicians, inventive tunings, Jaco’s deeply complex warbling. Song for Sharon, at nearly nine minutes, harks back to the album’s title as she addresses her contemplations of a friend from the past whilst on the road. Simple chord progressions, dashes of jazz, infrequent backing vocals leave space for Mitchell’s poetry and now more matured voice to soar. The lyrics lack resolution but exhibit the importance of the journey. Today, this album is recognised as fondly as it should’ve been on release.

Demented guitar parts and leaving the best parts till the end. A country mile away from The Great Escape. The band enter a tenuous period. The lyrics became personal, the sounds more aggressive. We get strong dashes of Gorillaz’ on this album. Graham’s disjointed guitar work is erratic yet masterful with note choice and execution. Damon’s band-passed falsetto hints at what will become 2D.

This whole album is beautiful, the fact it never feels like it's lacking anything even though it's just her and a guitar is a testament to how well written the songs are. We brought a little old nylon guitar with us to Eastbourne whilst recording the EP and if Theo had let us I reckon we would’ve put it on every track. It's also really good cooking music.

I literally love everything about this song, I feel like it's always in the back of my mind when I try to write anything. All the guitar parts and how they work together, the wonky dissonant piano bit and the way it goes off into something completely different but somehow still flows perfectly. Doug’s drumming has always reminded me of this song.