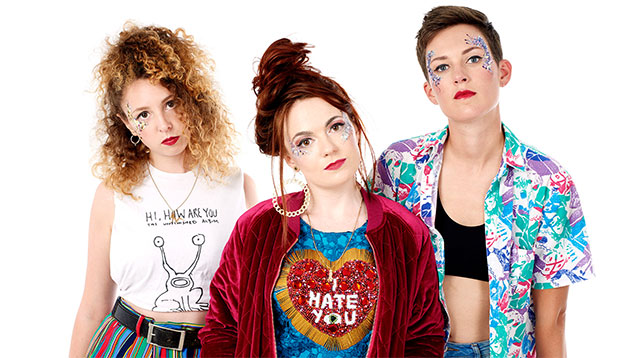 The London grunge gang let us in on the bands that have fuelled their raucous sound. Expect loads of punk-rock and Riot Grrrl from The Julie Ruin, Bleached, Sacred Paws, The Slits and more...

Where do you stand on 'feminist punk witchcraft'? That’s what gutsy guitar-weilding trio Dream Nails want to know.

The London gang have been prowling the UK’s live circuit over the last couple of years, casting spells wherever they go with their super-charged on-stage antics.

Emerging from the same gene pool as the iconic Riot Grrrl bands Huggy Bear, Bikini Kill and L7, theirs is a loaded sound ready to slay naysayers and remind the world that ladies rule grunge.

Now firm favourites on the forward-thinking Sisterhood stage at Glastonbury, and with support slots for Bleached and Petrol Girls in the bag, they’re lining up to take centre stage in 2018.

We catch up with them ahead of their upcoming show at the Cambridge Indie-Pop Alldayer tomorrow (18 November) to learn about the bands who have shaped their razor sharp sound.

We supported Cherry Glazerr on their European tour this May, and had the time of our lives. This song was the second in their set every night and brings back such good memories - it’s got such a heavy, sexy energy!

Bleached – Wednesday Night Melody
Bleached are AMAZING and we had the delight of opening for them on their London show earlier this year. This song makes me feel like I’m 14 years old and in love for the first time.

Petrol Girls – Touch Me Again
Petrol Girls are a band who have really opened so many doors (and stages) for us. Their live performance of this is so flawlessly raw every single time and we’ve learned a lot from them as musicians.

Anya
Spoon - Do You
Spoon has been my favourite band since I was 15. Britt Daniel has an amazing talent for using simple chords and repetitive rhythms. I always try to keep things simple when I play, too. The ability he has to evoke complex scenes and experiences with just a few words has had a profound influence on me as a songwriter.

Sacred Paws – Wet Graffiti
I love everything that Rachel Aggs does, but her playing in this is extraordinarily sick. That Afro-beat, highlife style guitar mixed with the catchiest hooks. It’s so inspiring. And it reminds me of coasting along French motorways in a tour van with Dream Nails and Petrol Girls this summer.

Bully – I Remember
Music is emotion, and Bully get that it’s okay for a woman to be angry, upset and messy, and sing about it. The overdriven guitars help express the pain of a breakup so perfectly. By the time Alicia Bognanno screams, ‘I remember what you do on Christmas’, I’m pretty much floored, every single time.

Lucy
The Slits - Shoplifting
The first time I heard The Slits was the first time I understood what punk was, why it was important, and why I had to be a part of it. Far from brash behaviour and male obnoxiousness, this whole album, and this song especially, opened my eyes to a punk that could be mischievous, playful, energetic and most importantly, female-centric.

Otoboke Beaver - Love is Short
I just discovered this badass Kyoto four-piece and am in the throes of some kind of serious love. Aside from being politically on point and outrageously cool, they are incredibly talented instrumentalists. I’m going to pass out when I eventually get to see them live.

Buffy Sainte-Marie – She Used to Wanna Be a Ballerina
I recently discovered Buffy Sainte-Marie through her social activism and work on indigenous rights on the peoples of the Americas over the last 50 years (she herself is a native Canadian). Her music is beautiful, and are largely feminist and environmental in their subject matter.

Mimi
Grimes - Flesh Without Blood
I love Grimes, she is a fellow Canadian and her songs remind me of home. She produces all her own work and speaks out about her experience as a woman in the music industry.  She goes to great lengths for her art and to keep creative control.

The Julie Ruin - Oh Come On
I love Kathleen Hanna's voice and songwriting style, and her newest band has an amazing sound. She has done so much for women in music and the Riot Grrrl movement. She is iconic.

Mitski - My Body's Made of Crushed Little Stars
I recently discovered Mitski and have been listening to the album Puberty 2 on repeat. The lyrics are beautiful and the music is dark. This punky song in particular is my guilty pleasure and makes me want to jump and scream, ‘I wanna see the whole world, I don't know how I'm gonna pay rent...kill me!’