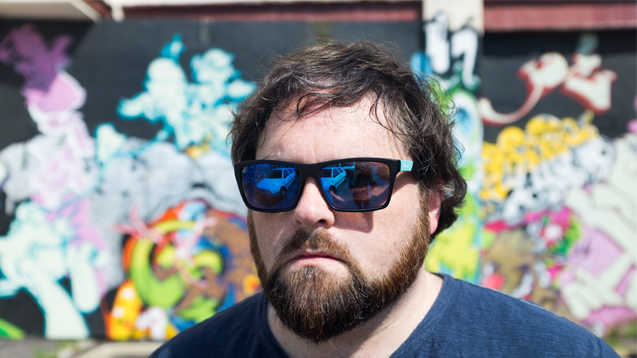 Welcome to our latest playlist, this week curated by Xtra Mile laureate Chris T-T. Dig into his ace selection of folk, alt-rock and art pop nuggets - perfect for a long autumn drive...

Ten albums in (the latest is 9 Green Songs) and he’s compiled a huge stack of ace songs as a solo artist and in cahoots with his accomplished fireb(r)and the Hoodrats, all charting the last 16 years of British folly with bold storytelling and wit.

He’ll be out on tour with Carter USM’s Jim Bob in November but in the mean time, here’s a selection of songs he’s put together for our latest Spotify playlist.

Here’s a few words from Chris on his list.

‘This is a baker’s dozen songs that are soundtracking my autumn - basically a playlist for long car journeys on tour through October as the nights draw in. It starts with the rock stuff, then goes a bit weirder. I hope you like it.’

Brilliant nasty lo-fi riffs from the scarily young London trio’s debut album Heavy Flow. The sleeve art is ace; they’re in white outfits stained with period blood. I saw them at The Great Escape on the recommendation of Mrs T-T who has supported them for a while on her weekly radio show Rifa’s Indie After Party (plug plug) - and they rocked very hard and messy, with imperious attitude.

Absolutely freaking brilliant hardcore band from the West Country via Berlin. Chatting with Newport promoter Sam Dab at her Le Pub punk venue, she reckoned they could become the most important heavy band in the UK. That sent me back to their (still limited) catalogue and it’s hard to argue with - there’s no filler and the live show is ferocious.

The Vega Bodegas - Rupert Are You Ready? (single, self-release)

That same night I was chatting with Sam, I was supported by Jimmy (ex Future Of The Left)’s new band The Vega Bodegas and they were great; a kick arse rocknroll band (the lead guitarist / second vocalist has serious mainstream rock chops) underpinning Jimmy’s chaotic, super-smart, super-vicious wit. This is their only track on Spotify so far and not half as heavy as live – but still a cool, funny song. Makes me think of Stewie’s ‘Rupert’ in The Family Guy.

Best new live indie band I’ve seen this year, though partly it was circumstances – they ripped apart a tiny photography shop in Brighton at a rammed Cannibal Hymns keg party during Great Escape. Their set made me think of the Stooges or very early Blur. I think Cannibal Hymns and parent company Raygun took the unofficial bit of Great Escape to a new level in 2016; half the best gigs were under their wing and not official showcases, which was cool as shit. Lots of free booze and Luke Sital Singh playing in an office lobby.

Total contrast. Emma Winston is an academic in the indiepop scene, half of Enderby’s Room, who plays keys for artists like Darren Hayman and Papernut Cambridge. There’s heady bittersweet magic in her songwriting that I don’t think she’s spotted herself yet. Raises her far above the crowd of quirky synth-pop singers – and this stunning track about a mental health collapse is one of my very favourite songs of 2016.

Progressive folk journeyman Green - he’s in Lau amongst many other projects – gathered a supergroup for his Flit album, which is thoughtful folktronica. This classic grumpy Moffatt spoken word thing is an album highlight for me.

Holy moly, that live performance of this album on Saturday night BBC2 was just incendiary. Beautiful. I spend half my life secure in the notion that I’m an amazing lyricist but then I listen to an hour of Tempest’s smith-like control of the violence in her wordplay – and she makes me feel nailed to the ground. Worse, we’re covering similar territory on our latest records but I’m an ageing middle class white man, so her potency tells me it’s time to shut the fuck up.

From Glitterbeat Records’ excellent, unexpectedly affecting Cambodian compilation album Khmer Rouge Survivors: They Will Kill You, If You Cry, which all sounds like this: sparse and heartbreaking.

I can’t get over this heart-bursting mum’s lament from Keys, built out of an acoustic loop, so a move away from her relentless piano. The rap’s a bit lame but maybe it had to be because of the song’s family theme. Anyway, great first taste of Keys for a while.

I know a couple of very old-school (pre-1973) Bruce fans who actually prefer Steel Mill (which until now has never had any songs officially released) to any E Street Band work. Now for the Born To Run memoir they’ve included some ancient tracks with the CD, right back to his sixties school band The Castilles. It’s worth a listen through the ropey sound: at this point, Springsteen’s songwriting is still forging itself out of Catholic hangups and youthful psych abandon - but his guitar playing is already mature. I bet that’s what many fans spotted first, back in the days when soloing musicianship was an important bit of the package. Damn, the boy could shred.

Full disclosure: this is Xtra Mile property, Barry’s an old friend and I played a bit of piano on it. So I’m log-rolling. But Non Canon is worth it – the “more straightforward” side project of Bristol’s Oxygen Thief, who has a lovely lateral way with a self-doubt fuelled lyric.

This isn’t strictly new, came out last year but I only discovered them over summer, it’s another recommend from Rifa’s radio show. A gorgeous plaintive rock voice, classic beautifully played American alt-rock and best of all, the songs tell proper stories like songs did in the old days.

Dan Mangan - Not What You Think It Is (Postcards and Daydreaming, Arts & Crafts Productions)

I have to close with this ballad from Dan, which I stumbled on while chasing something completely different for my radio show. Steven James Adams got me into Mangan, they’re celebrity mates I think. It says something about how achingly lush the song is, that he gets away with muted trumpet the whole way through.