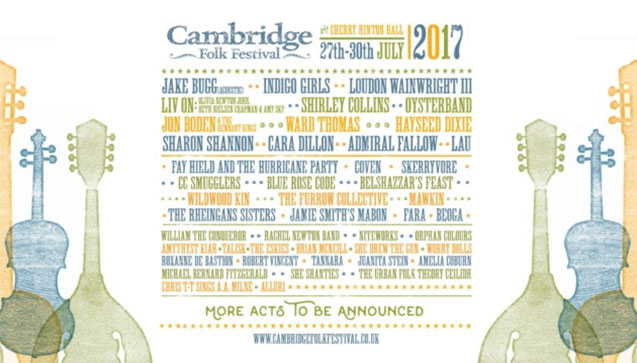 Cambridge Folk Festival manager Rebecca Stewart lets us in on some of the eclectic acts she's most excited to welcome to this year's shennanigans...

British acoustic institution Cambridge Folk Festival has been wowing crowds for over 50 years, embracing the breadth and depth of roots and folk from around the globe.

Featuring both acoustic legends and plugged-in innovators, its line-ups over recent years have rivalled many of the UK’s larger festivals.

From American country powerhouses and globally renowned singer-songwriters to the last word in bluegrass, gospel, Cajun and klezmer, its stages offer a heady bouquet of sounds and styles.

As there’s so much more going on under the radar, we ask festival manager Rebecca Stewart and head of marketing David O’Hara to let us in on some of the artists they’re stoked to see on the bill…

Lisa Hannigan - Knots
Lisa Hannigan will bring her crystal vocals and atmospheric voice to Cambridge this year. Knots is an infectiously good song with a great video.

She Drew The Gun - Since You Were Not Mine
Highlighting the diversity of musical styles at Cambridge, She Drew The Gun have a frontwoman who can sing like Patsy Cline, whose songs crackle with the drama and fire of Cat Power and Radiohead, but whose grit is like that of her heroes PJ Harvey and Patti Smith. Since You Were Not Mine is a hypnotic love song with stunning harmonies.

Rosie Hood - A Furlong of Flight Club
A festival favourite, Rosie Hood has been long since been involved in the festival through our education arm The Hub and plays the Club Tent this year. A classic folk voice with beautiful melodies will make her one to watch for the future.

Jon Boden - Roll Alabama
Our curator in residence Jon Boden will perform with The Remnant Kings in their first live show in several years. They’ll perform a one-off preview of material from Jon’s new album released this autumm.

Indigo Girls - Closer to Fine
With a career spanning 30 years together, Indigo Girls will be an amazing act to see headlining what we are unofficially calling 'Female Friday'. Look out for classic hits like this one.

Jake Isaac - Home
South London singer-songwriter Jake Isaac released his latest EP Where We Belong on Elton John’s Rocket Records last year. A true musician, Jake has perfected his stage craft since 2015, playing over 40 festivals including Glastonbury, Reading and Leeds, and we are beyond excited to have it at Cambridge this year.

{ ; } }
Tickets are still available at cambridgefolkfestival.co.uk
Features
Back to top