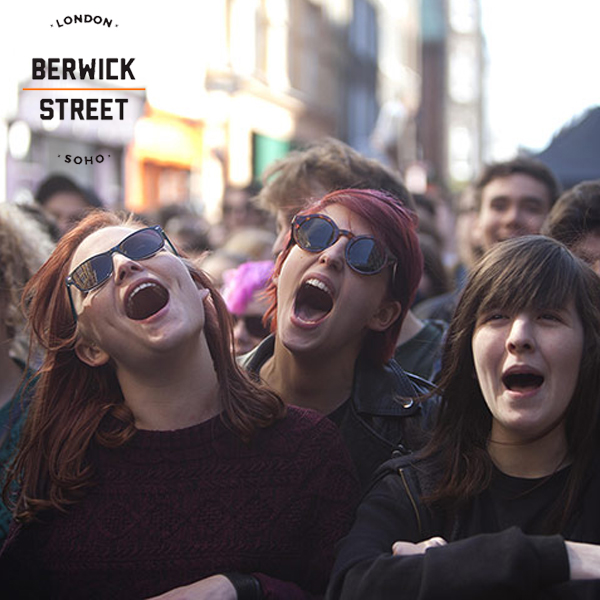 As independent music vendors around the globe gear up for the ninth annual Record Store Day, we ask the team behind the newly affiliated Berwick Street Festival to reveal their top tunes.

As independent music vendors around the globe gear up for the ninth annual Record Store Day, we ask the team behind the newly affiliated Berwick Street Festival to reveal their top tunes.

The Berwick Street Team organise a range of music and cultural events for Soho’s local high street, and are helping maintain this historic quarter of London as a musical mecca.

For the last couple of years they’ve worked in tandem with local record shops, including Sister Ray, Reckless Records, Sounds of the Universe and Phonica, to create the Berwick Street Festival in celebration of Record Store Day.

This year’s event, which takes place on 18 April from 12-6pm promises a host of as yet unnamed artists large and small – keep your eyes on berwickstreetlondon.co.uk for updates.

With all this going on, we asked the Berwick Street Team - an all-female mix of music lovers, festival goers and party animals – to share their favourite tunes ahead of the big day. Here’s what they picked…

Oasis – Morning Glory
Berwick Street was the backdrop for the Oasis ‘(What’s the story) Morning Glory?’ 1995 album cover. The album means a lot to the street and team but also acted as the soundtrack to my youth.

Young Knives – White Sands
One of our favourites from this up-coming band voted for The Mercury Prize.

A-ha – Take On Me
A classic tune and cutting edge music video (at the time) and all the girls wanted to marry Morten Harket!

The Velvet Underground – Sister Ray
Lou Reed wrote Sister Ray for his band The Velvet Underground in 1968. Managed by Andy Wahol the song was recorded in one take, making it a whole 17 minutes long! As well as being a great and unique piece of music in history created by legends, it also acts as one of Berwick Street’s much loved and established record stores.

Bruce Springsteen - Born to Run
This song makes us want to play air guitar before jumping on a motorbike and riding out in to the sunset.

Madness – Baggy Trousers
I remember dancing and dressing up with my dad to this song. Madness have always felt like the perfect fit to Berwick Street I can imagine them dancing through the street.

Florence + the Machine – Spectrum, with Calvin Harris
We love her voice; the band is like a modern day Fleetwood Mac with a dance twist.

Alice in Chains – Nutshell
I like this rock band's more mellow offering as they are usually quite heavy. This track is calm and it also has quite a dark/mystical element to it.

Caribou – Sun
A song that never fails to make me feel like summer is coming. My first real step into electronic music, Caribou eased me in and I have never looked back.