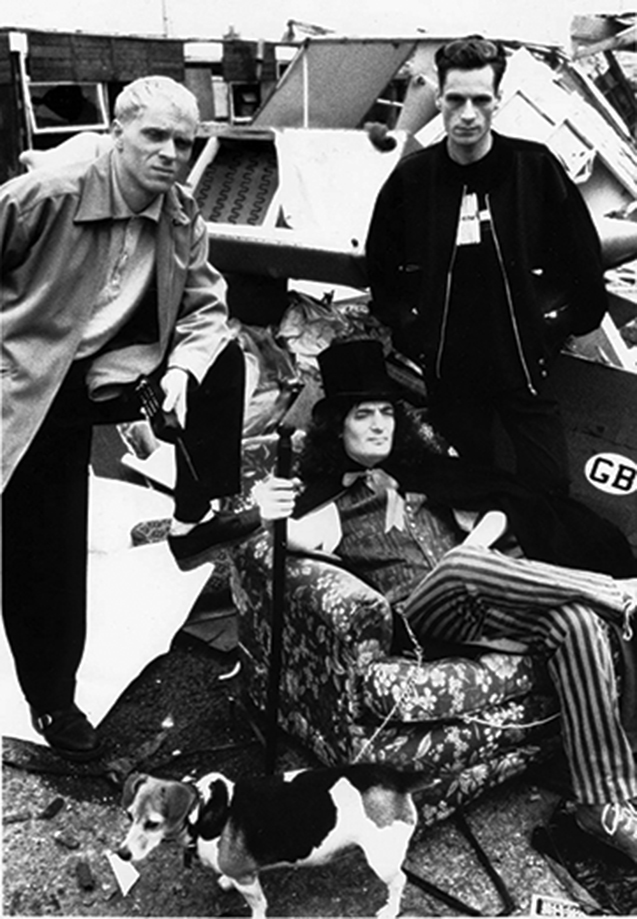 Twenty-five years after its release, Mr C digs out this snap and recalls how The Shamen came up with the chart-topping banger Ebeneezer Goode...

The Shamen and Jerry Sadowitz on location for the Ebeneezer Goode video,  1992 (full picture below)

Beginning life in Scotland, electronic act The Shamen struck gold after rapper Mr C joined in the early nineties. Their accolades included winning the Songwriter of the Year Award at The Ivors in 1992 and reaching the top of the charts with their rave anthem Ebeneezer Goode.

Twenty-five years after its release, Mr C recalls how they came up with the iconic banger as well as the trippy video featuring Scottish comedian Jerry Sadowitz…

I met The Shamen’s manager Charles Cosh first. It was at a party at Clink Street in London Bridge. I was DJing there, along with Eddie Richards and Colin Faver. It was a full-on acid house event and it blew his mind.

It was a year or so after the rave that Charles asked me if I would be interested in getting involved in a Shamen song they were working on called Move Any Mountain. Paul Oakenfold recommended me and Charles obviously already knew me. I was known as a rapper before acid house even started, but then I switched my style to house music in 1986 and started DJing the year after.

I liked the idea and the name of the band. I’d previously read a Carlos Castaneda book, The Teachings of Don Juan: A Yaqui Way of Knowledge, so I was already into shamanism. Plus the track’s subject was really up my street. It was about being positive, being able to achieve whatever you want if you believe in yourself.

It was a year or so later that we worked on Ebeneezer Goode. It was Colin’s idea to ask Jerry Sadowitz if he wanted to star in the video - he was a crazy comedian and there were parts of the song that matched what he was about. Especially lyrics like, ‘Very much maligned and misunderstood’.

So he was the perfect Ebeneezer character and it worked out brilliantly. We shot it in various parts of London and had a lot of fun. There was one part of the video where Jerry has got a huge penis on his nose. You only see it for a split second. It’s so quick it’s hard to take it all in but Richard Heslop, who made the video, is an absolutely genius. He made Jerry everything that we wanted Ebeneezer to be.

The success surrounding the song was expected. When we had written it, and we were making the music, I knew straight away. I said to Colin, ‘This is a number one hit. This is going to absolutely kick right off. It’s so catchy’. The pop world had gone a bit stale by that point. There wasn’t a lot of character in pop anymore, and I think Ebeneezer Goode added fun, and a lot of mischief. People were starving for it at that time.

Obviously, with the nature of the song, I knew we would get in trouble. And we did. The BBC wanted to know why we were singing, ‘E’s are good’. But we had explanations for everything. It was Colin’s idea. He said: ‘In London they drop their H’s’. We denied the drugs references of course. We told the BBC it was all about this guy, Ebeneezer, who is a fictional character we made up. He’s actually a composite character of eight different people that we know. A couple of DJs, a lighting engineer, a sound guy. Once the record got to silver all the people that we based it on received a disc as a thank you for being an inspiration.

We also did Top of the Pops with Ebeneezer Goode. They agreed to let us play it live, which is the only way we would do it. I look back at it now and it just brings a smile to my face. How did we get away with that shit?

This article appears in the current print issue of M magazine.