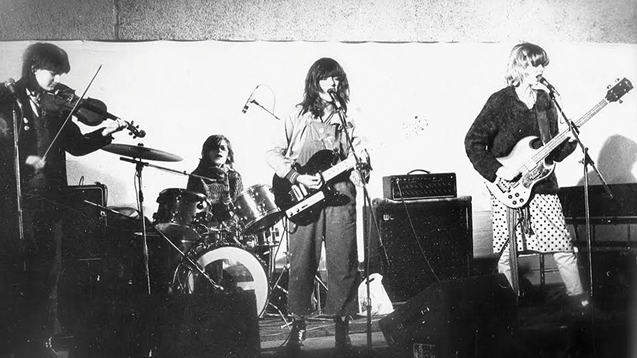 Jenn Pelly, music critic and author of the new 33 1/3 book on The Raincoats, remembers when she first fell for the all-girl post-punk gang.

Jenn Pelly, music critic and author of the new 33 1/3 book on The Raincoats, remembers when she first fell for the all-girl post-punk gang.

This picture was taken by The Raincoats’ long-time manager and collaborator Shirley O’Loughlin, who’s now also a photographer and lecturer at the University of Westminster.

Back then, the band were reinventing what punk could be. They used to live in a squat right near Acklam Hall in Ladbroke Grove and they played a ton of shows there, pushing boundaries with their poetic anarchy. The venue was central to the scene back then, hosting gigs from The Clash, Joy Division, Television Personalities and more.

I first heard The Raincoats in college, less than a decade ago, although it often seems like their songs have been inside of me forever. The Raincoats’ iconic self-titled debut was only the third ever full-length release on Rough Trade Records in 1979, but I wasn’t born until a decade later, in New York.

When a friend made me a mix that included The Raincoats’ legendary, binary-obliterating cover of The Kinks’ Lola, they immediately felt like a part of me. I had never heard anything like them before – atmospheric punk music with scratchy guitar and violin, melodic bass, girl-gang chants, feminism, anarchy, poetry – and yet, it was like a mirror. This was it.

I’m interested in the genesis stories of bands, especially bands of amateur musicians – the moment at which a group of people who previously did not play music find the confidence within themselves to unleash something, to express themselves, to will their musician-selves into existence.

I didn’t know a lot about who The Raincoats are as people and wanted to learn more. Magazine articles tended to reiterate the same information – like the fact that Kurt Cobain was an enormous fan, or that they influenced riot grrrl. So in November 2014, I flew to London to meet with the band – guitarist Ana da Silva, bassist Gina Birch, violinist Vicki Aspinall, collaborator Shirley O’Loughlin – and ask them questions about their work and lives.

I sat at Ana and Shirley’s kitchen table scanning hundreds of pages of clips (reviews, interviews, listings) from the British music weeklies of their era (Melody Maker, NME, Sounds, Record Mirror) that they’d saved in boxes. It felt like coming into contact with a secret history; these undigitised documents that could have very well stayed in boxes even longer.

A year later, I drove to Cape Cod, Massachusetts to find The Raincoats drummer and The Slits founder Paloma McLardy, aka Palmolive. I found that learning things about their lives illuminated the songs and deepened their meaning each time I listened.

I learned about Ana’s upbringing in fascist Portugal and her connection to classic rock ’n’ roll like The Beatles and Bob Dylan (The Raincoats even covered the Dylan tune Tomorrow Is a Long Time at one of their early shows).

I learned about Gina’s interests in conceptual art, performance art, land art, and dub. I learned about Palmolive’s interest in politically-charged Spanish poetry (like Garcia Lorca and Antonio Machado), about Vicki’s classical training and feminist foundation.

I could begin to hear that each song contained four distinct and quite disparate personalities, all merging to create magic. One of the most inspiring aspects of The Raincoats, to me, is how you can hear these women democratically working together – a bassline weaving into a violin, or two voices overlapping – to negotiate their differences and create something beautiful, something that could only be made by the four of them together.

Jenn Pelly writes for Pitchfork, SPIN, Nylon, Rolling Stone and the New York Times. Her new book The Raincoats is the latest in Bloomsbury Press’ 33 1/3 series and is out now.
Features
Back to top