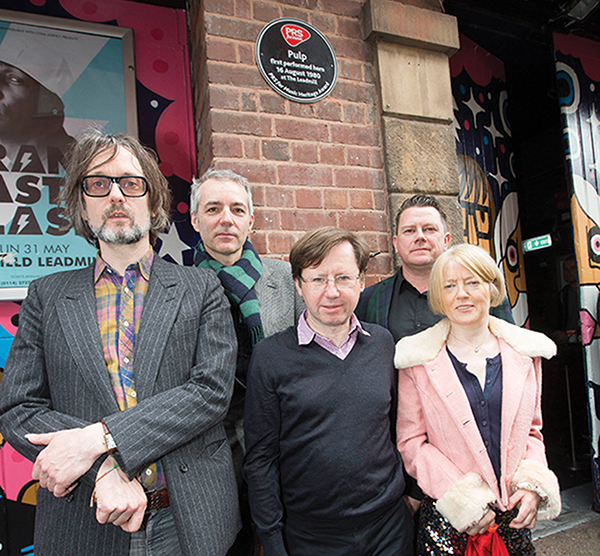 Pulp recently received a PRS for Music Heritage Award at The Leadmill in Sheffield, the venue where the band first performed. Here frontman Jarvis Cocker looks back on their first gig...

Pulp was a band I’d formed with my friends. I was 16, just a naïve teenager and the rest of the group were even younger. We were still at school.

The gig was a festival for the launch of a compilation of local bands called The Bouquet of Steel, which came out in 1980. The venue was so new, it had only just stopped being a bus garage. There was no official bar or anything. Just some trestle tables with cans of beer on. Everyone was sat around at the back with lots of people cross-legged on the floor. Dogs were wandering around and kids were crawling about. Our stage time was half two in the afternoon and there was probably about 50 people there.

Strangely enough it went all right. We were second from the bottom of the bill. The bass player fell off stage. We messed up a bit but it was also the first ever review we got. The review was written by Russell Senior in his fanzine Bath Banker and he then went on to join the band later as guitarist and violinist.

People found us to be so funny, because we couldn’t really play, so we got asked to play again. I think we even got asked to play the next night at the Hallamshire Hotel. And we kept getting invited back. It was good as I was only 16 and this allowed us to get away with drinking illegally. We were getting invited into clubs and I guess as you’re performing, no one can really ask you for ID. It was the beginning of alcoholism!

But for any Sheffield bands coming through the local scene, you had to play at The Leadmill. You’re also going to see the band you’re influenced play there when you’re 16 too. On that stage we saw Suicide and Nico. It’s always been a great place to watch live acts as it’s got such a big wide stage so you feel close to the music.

We did a Radio Sound City concert some years later at The Leadmill in 1991. After we’d played, I got talking to some girl who was telling me about going to Spike Island to go and watch the Stone Roses. She told me how everyone was shouting, Get sorted for Es and whizz. That’s where the inspiration for our song [and number two hit] came from.

This was taken from the latest print issue of M magazine. Click here to read further features from the publication.
Features
Back to top