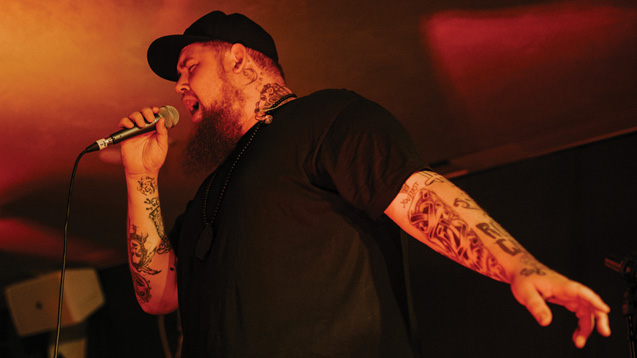 Last July, Rory Graham (aka Rag 'n' Bone Man) headlined the summer edition of PRS for Music Presents at the society’s London headquarters. Shortly after, he went stratospheric. We chart his rise...

Rag ‘n’ Bone Man is Brighton-based musical magpie Rory Graham, who mixes the mid-century blues of America’s Deep South with the grimy beats of UK hip-hop. Last July he headlined the summer edition of PRS for Music Presents at the society’s London headquarters, where this picture was taken.

Mixing Memphis splendour with lasting melodies, Rory glided effortlessly from a raw gravelly growl into something much softer. Those witnessing his live performance for the first time were bowled over by his music and frank force.

When he closed the show, he played Human and Skin, two killer tracks that have gone on to deliver Top 20 hits, with the former spending 14 weeks in the singles chart and peaking at number two.

Since performing, he also released his album Human, which made chart history earlier this year as the fastest-selling male debut record of the decade. In its first week of release, the record sold 117,000 copies across physical (which made up 67 percent of his total sales), outselling the rest of the Top 10 combined and giving the singer-songwriter a bigger opening week than debuts by other top sellers including Ed Sheeran and Sam Smith.

Rory also scooped two BRIT Awards this year, the Critics’ Choice Award and Best Breakthrough Act - a foot on the ladder of superstardom.

Although fairly new to the mainstream, Rory has been a prolific name in the British underground for over a decade, building a ferocious solo live reputation and fronting rap outfit Rum Committee.

But it was his signing to publisher Warner/Chappell in 2013, and subsequent label deal with Sony Music, which helped pave the way for proper success.

Mike Smith, managing director at Warner/Chappell UK, tells M: ‘If you look at the success of his track Human, it’s not a song that was ever written with any cynical means in mind. It has gone and touched so many people, but funnily enough, it didn’t stream particularly well to begin with.

‘It was fascinating to watch the slow arc upwards. As more people got to hear it and fall in love with it, it absolutely exploded. Now, it's omnipresent. It became one of the most universal songs of late last year and the start of 2017.

‘I think the album is incredibly cohesive from start to finish – one that I think we’re still going to be talking about in 12 months’ time. It's wonderful that he's here and he received the BRITs Critics' Choice and Breakthrough Artist awards in February. I sincerely hope he'll be up for Album of the Year and Male Artist at next year's BRITs and I think he's got a very good chance of doing that.’