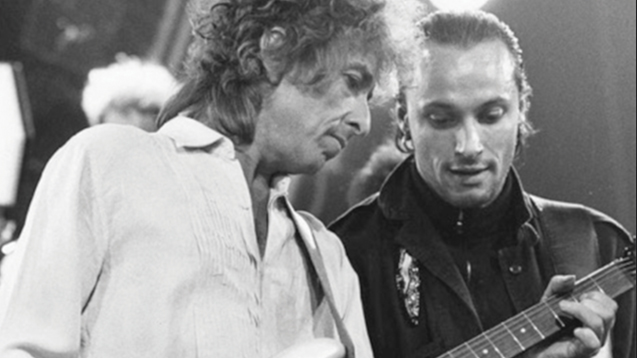 Right Said Fred are Richard and Fred Fairbrass, one of the UK’s most enduring pop acts.

In the 25 years since the release of their notorious hit I’m Too Sexy, the brothers have reached fans all across the world, selling in excess of seven million copies worldwide of their debut album Up, receiving two Ivor Novello Awards for I’m Too Sexy and Deeply Dippy as well as a BRIT Award nomination for Best British Act.

This photo was taken in Toronto in 1986 during the filming of Hearts of Fire, now a cult movie. It features Rupert Everett and Bob Dylan.

We’d already had some music industry experience - we played with Joy Division in ’78 as part of a tour with this American band Suicide – they were like Soft Cell on some serious medication. Very tough. We toured with them and as part of that, Joy Division did some shows including one at the Factory in Manchester. Iain Curtis and I exchanged shirts as it was so freezing in the venue.

Afterwards, Richard became a session player and got a gig working with David Bowie. He features in the video for Jazzin’ the Blue Jean. That led to this movie. For the film, they shot lots of live sequences at various arenas in Canada, plus some smaller venues in London.

The band featured Tim Capello, a multi-instrumentalist known for playing saxophone for Tina Turner in the eighties and nineties (and known to many eighties’ movie fans as ‘Sexy Sax Man’ from The Lost Boys), Reb Beach from Winger and English actor Mark Rylance.

The songs for the movie weren’t written by Bob Dylan so it was my job to go to his trailer and run through them with him. It was an amazing experience to have a one-to-one with an artist like him. It was crazy. You read stuff about stars all the time but on meeting him, he was really sweet, asked me what else I did and gave me the leather jacket he wears in the movie. I still have it.

He was friendly and down to earth. He didn’t travel in a limo, instead he’d get on the metro or catch the bus. I’d always been a Dylan fan so it was a real joy being in the presence of the greatest singer-songwriter of our generation.

The money we earned from this helped fund our move to New York in ’87, and led to us getting a record deal. We did a few shows over there, and a little gig at the Knitting Factory. One newspaper ran a review, they loved us, did a huge piece and the record companies went mad. We got signed to Capitol EMI without playing a single piece of music to them. They signed us over the phone.

Rich also went on to continue his relationship with Bowie in Labyrinth and Loving The Alien – and it was through working for David that we were both asked to work for Mick Jagger.

When we later did Top of the Pops as Right Said Fred, Tin Machine were on. And Bowie came up to us and said: ‘What the hell are you two doing here?’ Rich replied, ‘You cheeky bugger we’ve got a hit record’.

That experience and the money from working with Dylan helped fund all that which led to us forming Right Said Fred and going on to write I’m Too Sexy. It all adds up. It always makes me laugh when people talk about us being a one hit wonder and lacking credibility.

We played with Joy Division, shared stages with James Brown and all sorts of different bands, Bowie, Dylan and Jagger and apparently we’re a joke? It’s bizarre. But it is what it is. People like their preconceptions and we don’t bother ourselves with that. We just get on with making music.