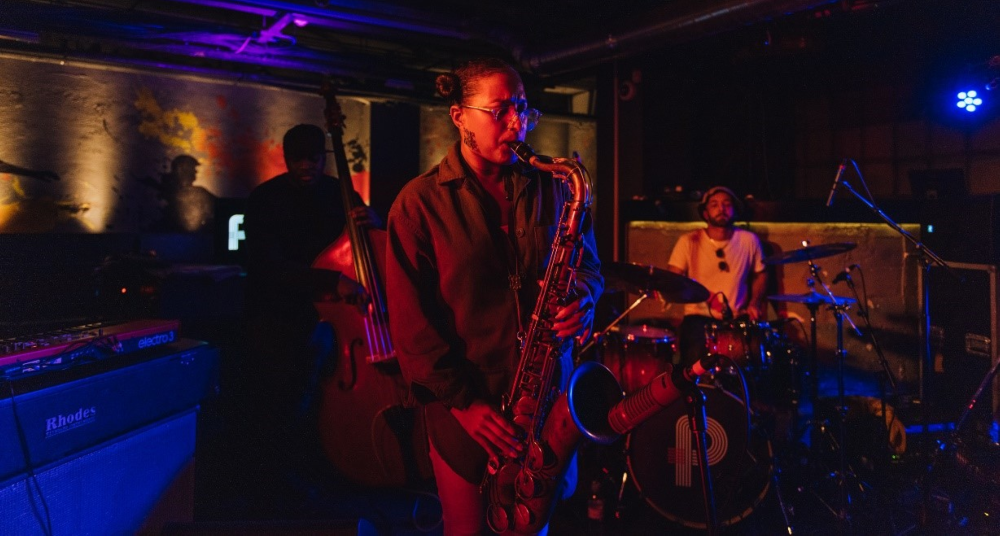 Nubya Garcia is finally back on tour. After two years of coronavirus-related delays and endless rescheduling, the saxophonist and composer is speaking from her hotel room in Hamburg, on day 24 of her European run.

'We have another seven days to go and it’s been so amazing playing live again, as well as quite surreal,’ she says, with a mixture of tour exhaustion and adrenaline palpable in her voice. ‘Some audiences are ready from the second you get onstage — they’re really excited to be back — while others have a few barriers up from two years of isolation, so I can see them taking some time before they engage more. Either way, people are ultimately so thankful for the music.’

The past five years have seen a meteoric rise for Garcia. Initially training in jazz as a teen by attending London-based free workshops, such as Tomorrow’s Warriors run by bassist Gary Crosby, Garcia went on to study in the junior programme at the Royal Academy of Music before attending Trinity Laban.

'...places like Tomorrow’s Warriors allowed me to not be the only Black person in a room and that meant I could just focus on the music.'

Throughout her studies, she built up a network of fellow London jazzers, including drummer Moses Boyd, tuba player Theon Cross, trumpeter Sheila Maurice-Grey and keys player Joe Armon-Jones. This group and their collaborators have been responsible for turning the English capital into the epicentre for a new approach to improvised music — one that eschews a fixation on traditionalist jazz standards for a genre-defying blend that instead incorporates the music of the city’s diasporic identity.

The result has produced two EPs for Garcia — 2017’s Nubya’s 5ive and 2018’s When We Are — both fusing afrobeat rhythms with electronic programming and Garcia’s languid tenor sax lines. While 2020 saw the release of her much-anticipated debut album, Source, which pairs the melodic force of Dexter Gordon with Latin cumbia rhythms and the references of Garcia’s mixed Guyanese and Trinidadian heritage.

Yet, much like everything else over the past two years, the journey to Source was not straightforward. ‘When we went into lockdown in March 2020, we had 18 months of amazing opportunities booked globally,’ she says. ‘To then see that disappear bit by bit was devastating.’

The itch to still release her music remained though. ‘I wrote the album in 2019 and it’s an entry into the diary of my life from that time — I was asking searching questions about identity and the nature of collective power,’ she says. ‘I’m a different person spiritually, personally and creatively now. In the end, I felt it had to come out soon because if you don’t let things go, you will never move forward.’

It was a shrewd decision. Releasing the album in August 2020, it has since precipitated a stellar 2021 for Garcia, producing a Mercury Music Prize nomination, debut performances at The Proms and Glastonbury, as well as winning the Parliamentary Jazz Award for Best Instrumentalist. She also released a remix album, Source We Move, in October. The record featured edits of her tracks from the likes of broken beat pioneer Kaidi Tatham and producer Georgia Anne Muldrow — prompting praise from Iggy Pop who wrote, ‘If I hear anyone say: ‘Things aren’t as good as they used to be,’ I tell them to listen to the Moses Boyd remix of Pace by Nubya Garcia.’

‘I can’t think of anything more amazing than seeing your people do well.’

‘There’s things like that Iggy Pop quote which really stand out and that I’ll remember forever,’ Garcia says. ‘It makes me feel like I’m on the right track, since someone I admire and who has been making their own incredible work for ages feels something from my music.’

Earning praise from a sonic mould-breaker like Iggy Pop feels appropriate for Garcia’s music, which often toys with the barriers of genre to produce a free-flowing instrumentalism. Nowhere was this more apparent than on the Royal Albert Hall stage in August, as Garcia and her band traversed frenetic jungle rhythms and gospel-laced vocal refrains during her Proms performance.

‘I still forget that The Proms happened, and it wasn’t even that long ago,’ she laughs. ‘It was a really surreal and phenomenal experience. I was deeply nervous just before I went on stage but somehow, I made it through.’

Stepping into the iconic space also had personal resonances for Garcia. ‘My granddad used to take my mum to the Proms when he first came to the UK and my parents in turn took me when I was a kid. I also played there when I was at school, so I know my way around the building. It was a beautiful full-circle moment to be doing my own headline show now,’ she says.

Alongside these milestone performances, Garcia has also been able to witness her fellow London jazz community succeed in recent years, with Moses Boyd earning a Mercury nomination for his 2020 album Dark Matter, Theon Cross releasing his second LP Intra-I to critical acclaim, and Joe Armon-Jones setting up his own record label. ‘I can’t think of anything more amazing than seeing your people do well,’ she says. ‘Being in a supportive community that hasn’t stepped on each other to get anywhere is the key for me. That in itself is more joyful than any other accolade.’

'I’m not trying to carry the responsibility of everything I represent on my shoulders because I’m only one person, and that’s tiring.'

There are still challenges, though. According to research from Women In Jazz, only five percent of UK jazz instrumentalists are women, while research from the Guardian found that UK festivals are still falling short on delivering gender-split line-ups, with the 2021 edition of the Isle of Wight festival being 73 percent male.

‘There’s a lot of festivals that don’t make a song and dance about a 50/50 line-up, they just implement it in a quietly intentional way,’ Garcia says. ‘This is how we normalise gender diversity because when you make it loud, it makes people think that they’ve only been booked because they identify as a woman.’ Instead, Garcia is playing for her own metrics of self-worth. ‘I’m not trying to carry the responsibility of everything I represent on my shoulders because I’m only one person, and that’s tiring. If I can just inspire more women to continue playing because they see there’s a space for them, then I’ll do that forever,’ she adds.

This uncompromisingly pragmatic stance is one that has been honed by Garcia ever since she began playing saxophone at 10 and realised that her progress partly relied on financial bursaries and programmes that encourage diversity.

‘I was a young Black girl who was not rich and I was very aware that not everyone needed these bursaries like I did,’ she says. ‘Having access to free music education is key and was key for me. It’s getting much harder now, which is heart breaking, since places like Tomorrow’s Warriors allowed me to not be the only Black person in a room and that meant I could just focus on the music.’

With her visibility acting as a role model for other youngsters and Crosby’s Tomorrow’s Warriors mantra of ‘each one, teach one’ remaining with her, Garcia’s musical focus continues. In fact, the rollercoaster of the past two years has proved how it is the impulse to create that will supersede all else. ‘If you look at our history, music always remains,’ she says. ‘You can remove it from concert halls, or the internet can crash and Spotify can disappear, but you can still make music just by yourself and within your communities. It’s something that is incredibly spiritual and part of the human experience, so it will never leave. That gives me a great sense of hope.’