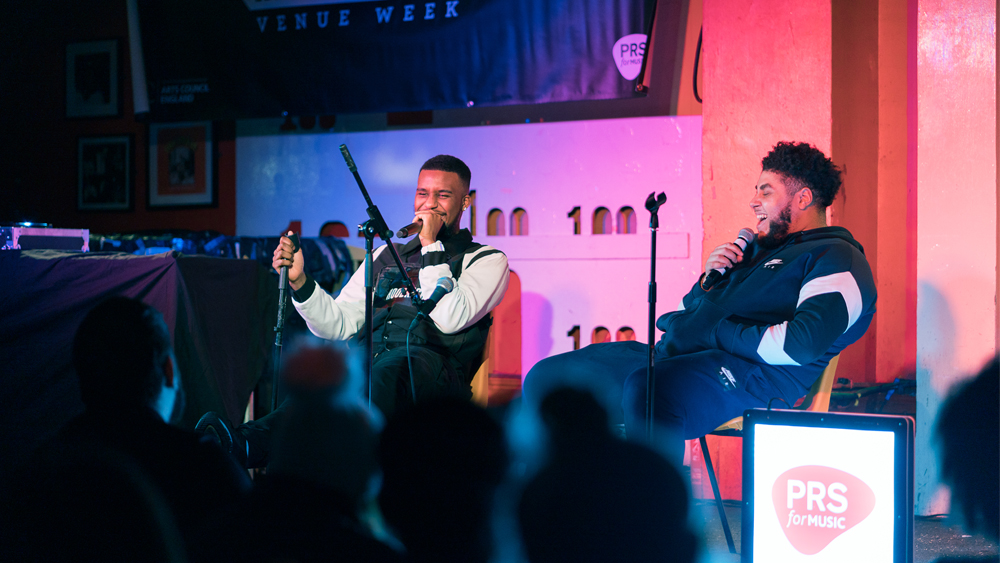 Novelist in conversation with Big Zuu: six things we learned

Novelist kicked off Independent Venue Week chatting to fellow grime MC Big Zuu ahead of his gig at the 100 Club.

Novelist kicked off Independent Venue Week chatting to fellow grime MC Big Zuu ahead of his gig at the 100 Club.

The South London MC had an exceptional 2018 releasing his debut LP Novelist Guy, which was nominated for the Mercury Prize, and he has begun 2019 as the Independent Venue Week ambassador.

Before he took to the stage to kick off a week celebrating the UK’s independent venues, Novelist sat down with Big Zuu to chat about his career so far, and this is what we learned…

Novelist (N): A lot of people don’t know this, but I’m actually Novelist II. You know you got King Henry VII, I got my name from my uncle, he used to call himself Novelist. So, he’s the one that had all the computers and software. I’ve been using, since I was a little kid, production software like Logic and FruityLoops. I used to watch my uncle making his house beats, I used to watch my uncle and I always wanted to produce. Even if I wasn’t writing, the whole grime thing crept in when DVDs started coming in the house. Risky Roadz and other underground DVDs that were coming out at the time, I used to watch them and think, ‘yeah, I wanna be like these boys when I’m older.’

Big Zuu (BZ): What kind of MCs did you like at that time, on those CDs and DVDs?

N: I got to say the big one, Wiley. I used to love watching Wiley.

On honing networking skills while still in school …

BZ: Your freestyle came out, you started doing a couple of other things, I first saw you on SPTV. How old were you when you were doing that freestyle?

N: I was probably about 14. I was at school, and I’ve always been a kind of clean hearted guy. I wasn’t bothering guys, I’ve always just been doing my thing. I wasn’t one of those brothers that was scared to leave my borough, I got loads of friends from all over the gaff. I remember linking up with MCs I’m still friends with now. From a young age I’ve had a relationship with certain MCs that are big now.

On his first breaks…

N: The first festival I ever did, and the first time I left the country, was Outlook Festival, Croatia. I was 17, oh my days, I think I did about three boat parties. You know when it’s your first time and you think you can do everything: ‘I’ll jump on that man’s set, I’ll do my sets.’ I loved it, I was killing it. So, I’m out there in another country on a boat the sun’s setting, I’m spitting my bars, and they’re singing them back to me. That one trip changed my life, it made me realise my reach.

BZ: Puts everything into perspective doesn’t it? You’re in Croatia, you’re on a boat, it’s all mad emotional, everyone knows the bars.

On staying true to yourself…

BZ: In that transition period what was it like knowing you were one of the key figures in the grime scene, you were so young at the time?

N: What I grew to learn is that people expect a lot, but as a musician, I’ve already got a plan. I know what I want, but people have already got plans. When I made that EP with XL records, people thought I was gonna drop an album. I didn’t wanna drop an album, I wanted to get better at producing.

BZ: You wanted to enhance your sound.

N: Yeah, I’ve always wanted to produce my album myself. I wanted my debut album to be Novelist, and that was inspired by Dizzy Rascal, what Wiley did, even what Skepta did with his mixtapes. I just thought to myself, ‘I can do that, so I’m gonna make sure that I do…’ I’m just being me. I’m here to stay, so I’m not going to do anything just because that’s what’s expected right now. At the end of the day someone can only be their self and the best version of their self.

His advice to rising grime stars…

I’ve just spent time learning how to be great at what I do. And also, the public see my musical life, but I’ve had a mad life. People don’t know that I’ve had a proper turbulent life, but I can always say that God’s got me, and I’ve got more to talk about. I’ve learnt some really deep lessons.

It’s funny to see how things change and progress. I hear a lot of people complaining, but I feel like you can do anything right now.

On the importance of water and a good night’s sleep…

N: Anybody that’s touring, please drink a lot of water.

N: If you’re a performer and you’re doing a long run, you have to have discipline. There’s a lot of people who burn themselves out and can’t tour when they’re in their 30s and 40s. Sometimes you’ve got to lock off the social media, rather than being on it at 1 or 2am. Go to bed on time and drink water.

Also, just be nice, do your part. You’re responsible for yourself.