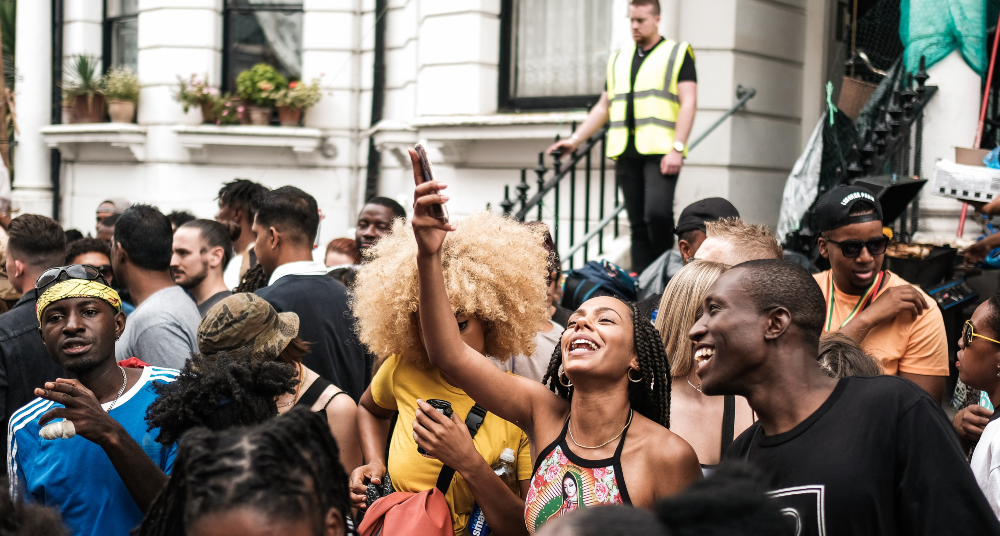 This year marked the second time that the Notting Hill Carnival was cancelled due to the COVID-19 pandemic. Not only did the usual revellers not have their opportunity to party through the streets of west London, but it seem chroniclers also missed the opportunity to remind us that it's 55 years ago that the Carnival started as an annual September event.

Yes, I know pundits often refer to Carnival as having started in August, because it's become a fixture of the now infamous bank holiday weekend, but that's not how it started.

Let's rewind and put some context to this history. If I was to ask who started the Carnival, I'm sure most will blurt out: 'Claudia Jones!' Which wouldn't be surprising, as that's a well-entrenched narrative. But it's agreed that it started after her death in 1964.

What Claudia did, however, was organise through her West Indian Gazette (WIG) newspaper, six sit-down, in-door cabaret style Carribean Carnivals in different London venues. The only link to the west London locale is that the idea for the WIG Caribbean Carnival, which was launched in January 1959 at St Pancras Town Hall, was a response to the 1958 race riots that took place in Nottingham and Notting Hill.

The link between the WIG Caribbean Carnival, and the beginning of Notting Hill carnival as we know it, isn't even tenuous. So describing Claudia as the Mother of Notting Hill Carnival is not only disingenuous, it actually tarnishes her legacy. The unarguable description ought to be Mother of Caribbean Carnival. In my opinion, the Royal Mail got it right, when it issued a stamp with her image in 2008, describing her aptly as Civil Rights Activist.

Now that we've cleared that up, I'd also like to clarify which year Carnival started. It is amazing that an event that was launched within living memory has conflicting information. Indeed, a 2014 BBC documentary entitled Notting Hill Carnival: Who Started It? didn't come up with a conclusive answer, despite interviewing people who were there at the start. I hope I can bring some clarity.

The chief organiser of the Notting Hill Carnival was a former social worker and Notting Hill resident called Rhaune Laslett. In 1965, she organised a children's party outdoors in Tavistock Crescent. Russell Henderson's steel pan trio, including Sterling Betancourt and Ralph Sherry, were invited to perform at the party, and in a moment of spontaneity, the pannists led a procession around the local streets.

'Carnival started as an inclusive multi-ethnic, multi-cultural affair aimed at embracing and bringing some fun to the different ethnic communities within the then run-down Notting Hill area.'

However, as a historical musicologist, I assert that Carnival officially started in 1966. And that's when the Notting Hill local papers started covering what was variously referred to as Notting Hill's Carnival, the Notting Hill Fayre and Pageant and the London Free School Festival.

Rhaune was reported in 1966 to have said that that the first Carnival had gone so well that it will be repeated annually. In one report, she said that there will be two in 1967, one in May and one in October.The Kensington Post, 23 September 1966, was positive in its reporting of the 'Crowds At Fine Start To Fayre', and the first in Notting Hill 'to see the start of the first 'Notting Hill Fayre' in over a century.'

Whilst the Henderson trio led procession in 1965 was spontaneous, the procession for 1966, which included Russell Henderson’s Trinidadian steel band, was planned and publicised well before the event.

Also, the Carnival started as an inclusive multi-ethnic, multi-cultural affair aimed at embracing and bringing some fun to the different ethnic communities within the then run-down Notting Hill area. There was a particular focus on the local children, some of whom came in historical fancy dress costumes.

About a 1,000 people attended the 1966 Carnival. It was a modest affair with only a few floats, horse drawn carriages, and cars decorated with flowers and flags. There's a black and white film easily accessible online which shows Ginger Johnson and his African drummers performing on a float.

Rhaune estimated about 5,000 joined the procession in 1967, with one local newspaper running a headline that read: 'Hundreds Of Hippies Join Festival Parade', whilst the police, with not much to do, were said to be among those that watched the dancers do their thing on the streets.

In 1968 it rained. Although those in the procession, including children in fancy dress, were drenched, it did not stop the procession.

In 1969, while the hippies and flower children were heading to the Isle of Wight Festival of Music, the Carnival attracted around 3,500 people, its biggest audience yet. One newspaper report headline claimed: 'They May Have Had Dylan On The Isle Of Wight, But North Kensington Had Carnival Time!'

In mid-August 1970, the Carnival faced a precarious on or off situation. Rhaune cancelled it at the very last moment. Her reason being that she feared there might be violence, given that there had been some recent racial trouble locally. Also, they had lost the use of All Saints Hall, which was the venue for the close of the procession.

In her letter to Kensington News, among other things, Rhaune expressed the view of having wanted the carnival to take place in the Easter season, which is more in keeping with what happens in the Caribbean.

Indeed, she had hoped to organise a community meeting in October to work towards a Carnival the following Easter. But that became redundant after local organisations and African Caribbeans decided to continue the Carnival. Dubbed the People's Free Carnival, it took place on Sunday 30 August.

With all the confusion, it's not surprising that the numbers were low. There was also a near-one hour delay to the start of the procession from Powis Square. During this time, Nigerian-born percussionist Ginger Johnson and his African drummers kept the crowd occupied with their drumming. Incidentally, Ginger was well known in the Swinging London of the sixties for providing many pop and rock acts, including the Rolling Stones, with edgy African rhythms.

The 1970 procession was accompanied by Ginger and his drummers, and steel bands that provided the Caribbean vibe. It all finished at Powis Square, where musical acts, such as Clifford Mataya performed.

Particlarly from the early 1970s, with African Caribbean people in the lead of its organisation, the Carnival became more and more an African Caribbean expression, from the increased masquerades that bring colour to the procession, to the introduction of reggae and other forms of black music genres, to the static sound systems that now form the bedrock of the Carnival we now know.

Kwaku is a historical musicologist and history consultant. Find out more about his events.