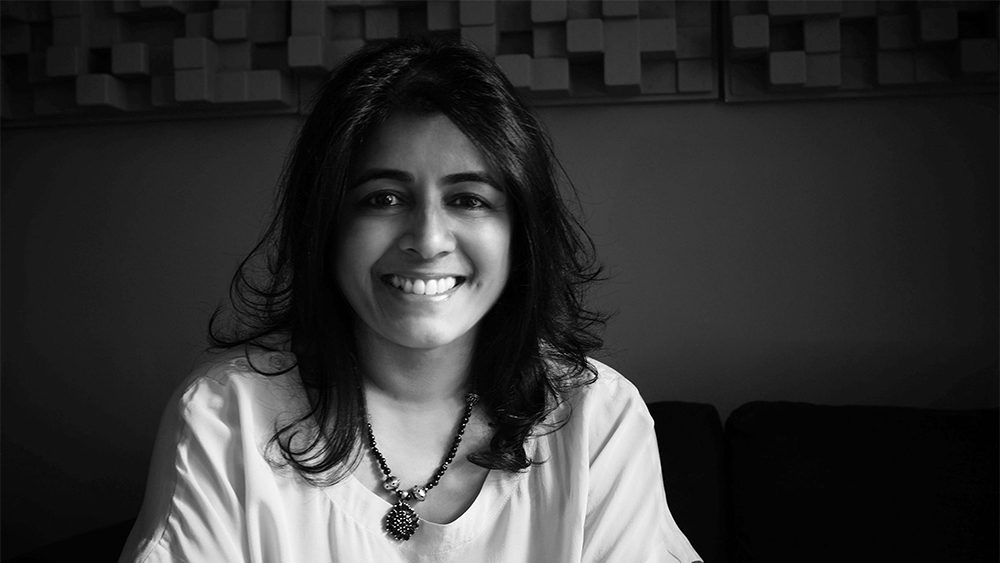 Nainita Desai: ‘When I'm composing, I'm imparting a little bit of my soul into a piece of music’

Award-winning composer and Ivors Academy Senator Nainita Desai gives us some background on her career beginnings and unpacks the importance of diversity and visibility in music.

Nainita Desai is one of the 40 music creators who have joined the Ivors Academy Senate to represent its members’ views. They work across a range of genres including classical, grime, jazz, games, film and TV, theatre and musicals, pop, rock, sound art and electronic music.

If you’re a songwriter or composer, find out more about The Ivors Academy and join.

I was very much a geek and I loved playing around with synthesisers and music technology. I learned the violin and the piano at school — thank goodness for free music lessons. My school music department had this amazing VCS3 synthesiser and I asked to borrow it. I took it home for two years and I didn't  bring it back until after my A-Levels. I was very lucky and fortunate at school; I took it for granted. I had a list of instruments presented to me and they said, ‘What would you like to learn, the trombone or the violin?’ I'm shocked and heartbroken at what's happening with music in education today.

I wanted to work for the BBC Radiophonic Workshop, but they disbanded the department before I could. Regardless, it piqued my interest and I decided to go into music engineering and become a record producer. I did a degree in maths and a post-grad in music technology, and then a scholarship to go to the National Film and Television School in Beaconsfield which is one of the best film schools in the world. I got into sound design, as well as dialogue editing and sound effects for feature films — working on films by great European filmmakers like Bernardo Bertolucci and Werner Herzog. That gave me grounding in sound for film, not just the music, but how there's a place for everything on the sonic landscape of film. After a couple of years, I got a job and started as an assistant sound engineer, ending up working as Peter Gabriel's assistant music engineer at Real World studios. It was truly a dream come true.

'Women aren’t seeing other women in positions of power in the music industry, particularly in things like engineering. I can name on one hand the number of female music engineers I know.'

Looking through the history of composers over the last 50 or 60 years, it's been a very male dominated profession. It's not something that women felt that they could take on as a career. It was just one of those things. For me as a British Asian, having been born and brought up in the UK, I guess I stick out a bit. But I've always looked at myself from the inside out, not from the outside in. I never thought when I was growing up that people would look at me and think, ‘Oh, who are you?’ I happen to have brown skin and I happen to be a woman. I've never let that put me off going where my heart wants to go.

I give talks to students at universities, and it's fascinating to see the shift in demographic over the years. There’s almost a 50-50 gender split now with music degree students in universities and that's wonderful to see. Women are seeing other women do it, and people want to employ people that look like themselves. Guðnadóttir won the Oscar for the Joker score a couple of years ago, and before that you had Rachel Portman and Anne Dudley. Still, it's not enough. Women aren’t seeing other women in positions of power in the music industry, particularly in things like engineering. I can name on one hand the number of female music engineers I know. There are very, very few of us, but times are changing. There's been a huge movement because of #MeToo, it just takes time for things to become much more widespread. There's a lower retention rate of women in film music the barriers are still there, but they are vastly improving. Change comes from the industry being much more proactive.

There are lots of initiatives now and communities have been set up through organisations, like the Ivors Academy, who are championing diversity and inclusivity. When women win, or are nominated for awards, it's incredibly inspiring for students and the younger generation of songwriters and composers.

'Ultimately, it's important to open up the industry to a greater diversity of talent because it just helps create a richer cultural landscape.'

Award ceremonies need to champion diversity, but women don't want to get work or win awards just for the sake of meeting quotas. Women want to be acknowledged on the quality of their work and nothing else. That is what I really love about the Ivors. They make a huge effort to have diverse juries, but also all works and entries are judged anonymously so that you're just judging the work on its merits, not on the basis of gender, race or class. There are other organisations like the Alliance for Women Film Composers and another called the Composer Diversity Collective, which is a great organisation set up by a handful of Black composers in America — these organisations have been doing a lot of work trying to improve visibility for composers and having initiatives and mentoring schemes.

Ultimately, it's important to open up the industry to a greater diversity of talent because it just helps create a richer cultural landscape. I was part of a conversation and helped introduce change in the music syllabus at school. When you're learning any musical instrument, the syllabus and the music that's presented to you should be more diverse. That’s where it starts, and not only learning to play Grade Five piano through dead, male, white composers. We should be much more inclusive there, because then that's where it becomes normalised. You become curious and ask, ‘Whose music am I learning to play here?’ That opens up a whole new world.

'We need different voices. We all have different stories to tell, things would be so boring if we were just hearing the one story again and again.'

The more we have people like Naomi Pohl in power at the Musicians Union, or people in a position to help instigate greater change that filters down the ranks, the richer we are culturally. Music is a non-judgemental form of art, it shouldn't have a gender attached to it. Men and women can bring equal amounts of sensitivity to any form of music or visual art form. Agents are in a strong position to take on and represent composers in an area which has traditionally always been male dominated. Now, they're making a huge effort to find talent, amazing talent, that are women or non-white, non-binary, LGBTQ+. We need different voices. We all have different stories to tell. Things would be so boring if we were just hearing the one story again and again. We just have to come together and be singing from the same hymn sheet.

To find out more about the Ivors Senate, head to the website.