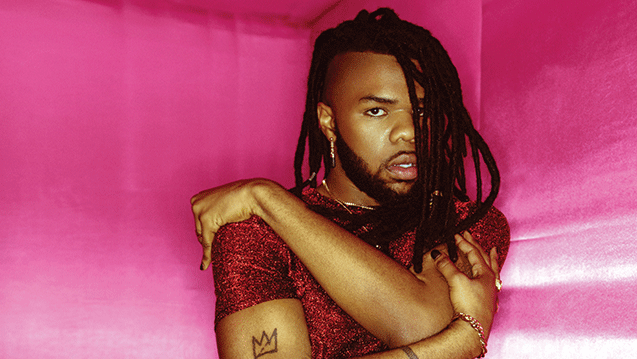 MNEK: 'I never felt I’d be established until I released an LP'

MNEK, one of the UK's biggest hitmakers writing today, lets us in on why the album format is still so important as an artistic statement...

Since being discovered in his teens, songwriter and vocalist Uzo Emenike - aka MNEK - has played a huge role in hits for everyone from Rudimental to Kylie.

Despite such sustained access – which has helped him clock up billions of streams and worldwide hits over the last five years – he’s only just released his debut album Language.

The album has brought him the true fulfilment he’s been looking for, and proudly showcases his lyrical worldview as a young black Londoner in 2018.

Here, lets us in on why the album format is so important to him as an artistic statement, how the process of releasing it has helped him grow creatively, and how streaming has affected songwriters’ lives…

How did your musical journey begin?

I’d always written songs growing up and put some songs up on MySpace. Through that, I was looked up by publishers and ended up getting my first publishing deal when I was 14.

I decided I wanted to do some writing for artists and pursued that: the first cut I got was with The Saturdays and their track All Fired Up back in 2011 - it feels like a lifetime ago - it was through Xenomania, who I worked with at the time. I’ve been producing, co-writing and singing ever since, and people have gravitated towards some of it, which is nice.

Did people come knocking on your door after the track with The Saturdays?

It’s actually really funny with The Saturdays thing, it was more the Xenomania construction – it didn’t really get me on people’s radars. Initially, I just loved pop, but then I also loved doing stuff with all the house guys like Rudimental, Gorgon City and Duke Dumont. These songs opened doors for me in the dance world massively. It was going through both pop and dance music – there are various routes in which I’ve had breakthroughs.

It’s interesting because you’ve already had quite a career already but are still young?

It’s been a while since I started out, sure. But at the same time, I feel like a new artist. I am a new artist. I’ve never felt like I’d be established until I released an LP, so here we are.

As a writer for other artists, has the dominance of streaming had any impact on how you approach your writing?

For me, it’s not changed a thing. You hear all these murmurings about skip rates, but you should write your song regardless of Spotify. I don’t think it should impact the content itself. All you can do is you hope you write a great song and that people want to listen to it. I’m always surprised by the streaming numbers around the music I release and how far certain tracks go. It’s crazy. But Spotify shouldn’t infiltrate the creative process. Whatever streaming service you use, it’s just a medium through which you listen to the music.

Is your forthcoming album something you’ve always wanted to work towards?

Yeah, I admit the streaming world makes me question the longevity of the album but at the same time I’ve always wanted to release a debut LP and really have a body of work people can appreciate, release singles around, build a campaign around and make it an experience from start to finish.

I grew up listening to records like [Janet Jackson’s] The Velvet Rope, all of Michael Jackson’s albums – they were bodies of work thought about from start to finish. Obviously, it’s lost when you can pick and choose which bits of a record you can play. But I still think albums should be listened to the whole way through. American artists still have this sense of the album as a concept, Beyonce, Drake… fans will still listen.

So, there’s still an appetite for long pieces of work?

Yeah, it’s great. I’ve released lots of singles and an EP but with a lot of space in between them. You have the fear of not grabbing people’s attention, where’s the next one coming from? It’s a cycle where you don’t make any creative leaps. Having an album as a body of work allows you to make a creative leap as well as letting you move onto the next venture and project…

What’s going on with your own artist album?

I’m really excited about it finally being out; it’s been such a long time coming. I’ve written it, helped mix it – I’m hoping it’ll really give people a chance to hear where I’m coming from. My name is associated with so many different things which is great and I’m thankful for. But I also want to say something complete from my head and offer my lens on life. I’m excited for people to hear it.

Most of the songs are pop dealing with various different things – relationships, sexuality, stories I’ve heard growing up in London as a young, black gay man. I don’t want to try and compete with everyone else – it’s not about me selling blockbuster numbers. I just want my voice to be heard. It feels surreal that it’s out – I’m really pumped.

What else are you doing for the record?

A mini tour – I’ll be doing a medley of the hits, my co-writes, tracks I’ve featured on – I love doing this music too.

If you had a piece of advice for new songwriters, what would it be?

Allow yourself to write some shit songs. It’s always going to happen, but you have to get this kind of stuff out to know good from bad. Also, never be afraid to collaborate either to help you learn more about your skills and abilities…