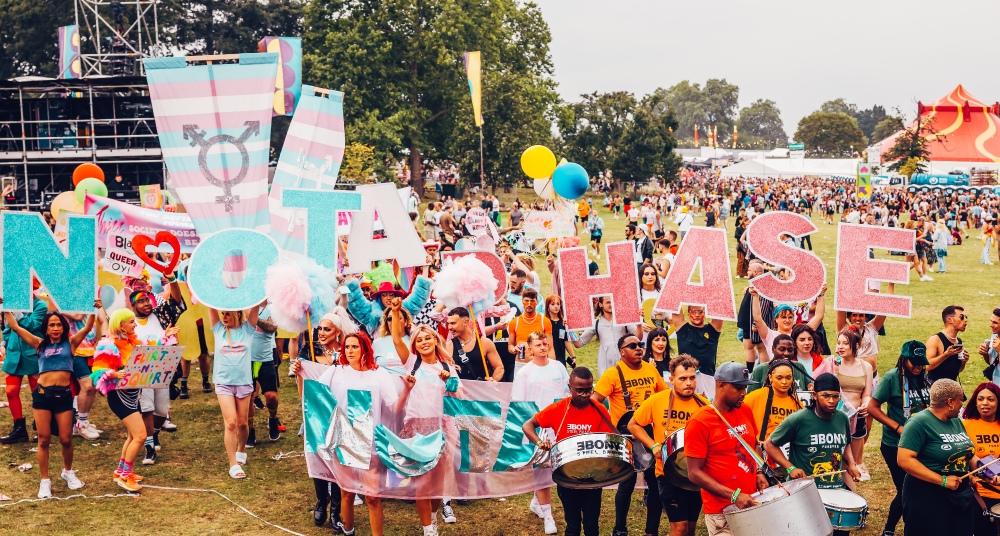 For some of its devotees, Mighty Hoopla is a homecoming. In the first weekend of June each year, thousands of people - many of them queer, Black, or from other marginalised groups - cover themselves in glitter and head into London’s Brockwell Park for a day of pop, cabaret and community. The festival welcomes them with open arms, exactly as flamboyant as they are.

Initially launched in Victoria Park in 2017, Mighty Hoopla operates with a focus on freedom and expression. Organisers work to ensure that LGTBQ+ people, people of colour and disabled people are not only adequately represented but deliberately catered to, and the festival is gender inclusive across all areas. This year, the festival bill is approximately 80 percent women and non-binary artists. Behind the scenes, women and non-binary people make up around 60 percent of the organisation and production team.

"I think sometimes young queer people we grow up singing into hairbrushes in secret to Britney and to Anastasia, and with Mighty Hoopla it's almost like you get to do it again"

This is the way it’s always been. Festival co-founder Glyn Fussell estimates that the gender balance among production staff has been around 75 percent women since Mighty Hoopla’s launch. Feminism is built into its foundations, allowing for the event to be meaningfully inclusive and to continue to progress with each passing year.
‘I’ve always run business in the same way that I want my life to be,’ he says. ‘I’m a huge feminist, and I prefer being around brilliant women than I do semi-brilliant men. I don’t want to be in a space where I’m only around people that have walked the same path that I have. It’s just not interesting. Progress is not made in that way.’ 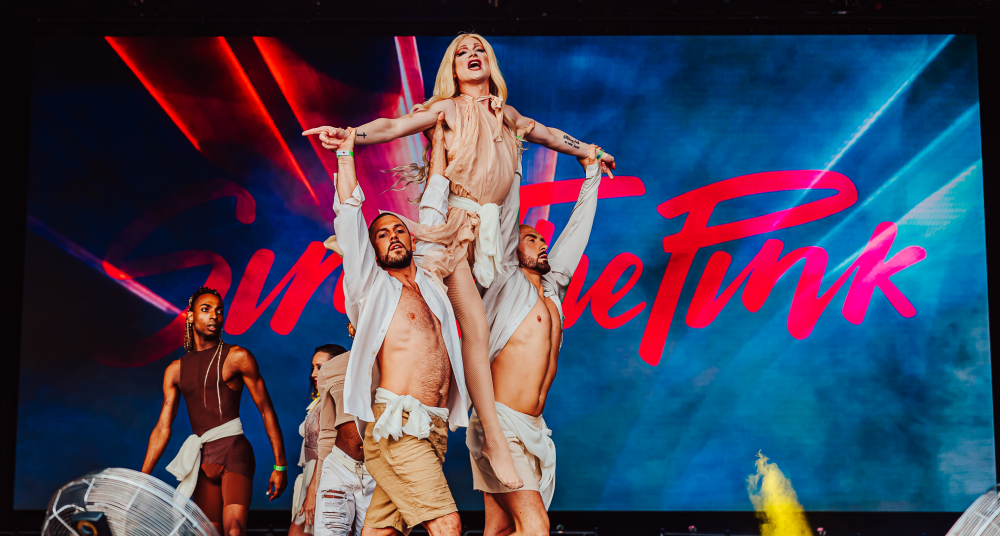 Inclusivity starts behind the scenes and spreads outwards. Consideration for their diverse cast of attendees influences all aspects of Mighty Hoopla’s delivery, shaping everything from site accessibility to talent booking, security staffing and general etiquette. The festival’s Arts and Cabaret producer Cassie Leon notes that having a range of viewpoints allows the organisers to put best practices in place early, and in turn ensure attendees’ experiences of the day are positive.

‘If you have people from all different walks of life, and you have an array of people who identify in different ways, it means there is that education in the office as we work,’ she says. ‘And then that pushes it forward into the festival as a whole.’

‘There was a video that we made last year about how people dress to come to festivals, [showing the difference between] dressing as something shiny or dressing as people from different cultures. We were making sure that we had that discussion about what our rules are, thinking about what cultural appropriation means to us as a festival. What happens if our audiences turn up like this?’

"I don’t want to be in a space where I’m only around people that have walked the same path that I have. It’s just not interesting. Progress is not made in that way."

Having those discussions in-house, in an open and supportive environment, allows the team to develop along with the community and keep pace with changing language and social mores. ‘Those conversations happening in the office are really refreshing, and it means it makes its way onto our stages,’ says Cassie. ‘We're not standing there saying that we know everything about queer culture, because it will change so quickly, but we are having those conversations as we move.’

Another driving force of these conversations is that, even as it draws people from around the country, Mighty Hoopla strives to keep the ever-changing face of London at its heart. The festival has to be inclusive of different types of people, because they are the people who make up the city. They’re what Glyn refers to as ‘the best of London’.

‘We’re not pinned into that thing which I think can really stifle festivals, which is being cool. We don’t have to bother with that,’ he says. ‘What’s really important for us at its highest is community. For me, what’s at the heart of London is community coming together in all shapes of life. Really, Mighty Hoopla is the embodiment of that with a big queer hat on, and a kind of joy-shaped rainbow around it.’ 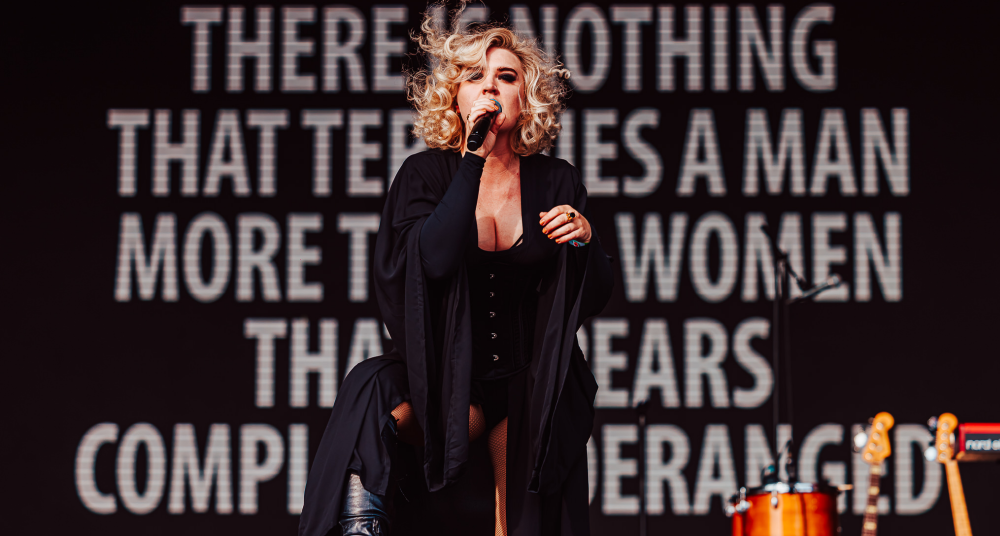 Beyond everything else, Mighty Hoopla is a space for joy. Fundamentally, the efforts to drive inclusion and respect are all in service of that. The organisers are well aware that for some of their attendees the festival could be the one day a year they’re free to be themselves, without judgement. Spaces like this can be vital, both life-affirming and life changing depending on where people are at in their queer lives. The team want to make sure that the experience is a good one.

‘Because if you fuck up somebody's first ever queer festival, where they don't necessarily feel like they are super proud to be out and about, then you've kind of made that dent forever,’ Cassie says.

In a way, the positive atmosphere is self-regulating. Organisers had concerns that as the festival got bigger, it would be harder to maintain a truly respectful environment. More attendees means more variables, and more people who may not be acquainted with Mighty Hoopla’s aims. In practice, it seems the opposite is true. More people on site also means more people unwilling to tolerate disrespectful behaviour on their day out. There have been few issues.

"We're not standing there saying that we know everything about queer culture, because it will change so quickly, but we are having those conversations as we move."

And the space rewards them. Alongside more established artists like The Bitten Peach and Crayola the Queen, Cassie regularly programs brand new artists on Mighty Hoopla’s cabaret stages. These new performers get as much of a hero’s welcome as anybody else, with a thousand people screaming their names. Everybody who performs is celebrated. ‘Lots of artists that I’ve put on those stages are just normal groups of people who are like “Oh, I actually like hula hooping. I’ll try that,”’ she says. It’s an environment where the pursuit of happiness is encouraged, as is a sense of childlike wonder.

For Glyn, a certain element of nostalgia is crucial. The 2022 headliners, for example, were Steps and Sugababes, with Anastacia, Blue and Five also appearing. ‘I think sometimes young queer people we grow up singing into hairbrushes in secret to Britney and to Anastasia, and with Mighty Hoopla it's almost like you get to do it again, but with 25,000 people around you that look like you,’ he says. ‘You're getting to almost relive your childhood on a grand scale, or in the way that the world should have given you it. That feels amazing.’

In terms of joy, that has to be hard to match.