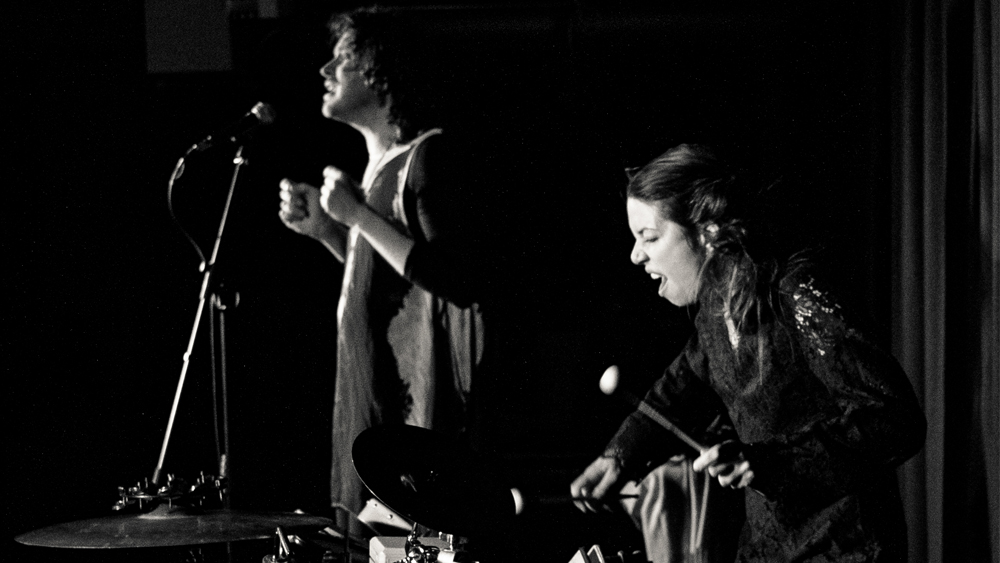 The Margate-based duo, comprised of Clair Le Couteur and Carli Jefferson, formed in 2017 with a desire to perform stripped-back traditional folk informed by a diverse range of influences from trip hop to Sufi music.

While the source material might be traditional, Lunatraktors reimaginings subvert common notions about the genre and tap into contemporary concerns like immigration and political unrest.

Although their music often ventures into dark drone territory it’s interspersed with a playful approach to offer moments of levity.

Here, we chat to Lunatraktors about their debut album, the thinking behind broken folk and their take on current music scene…

How did you begin making music together?

We met in a bar. Clair was recording a song about werewolves and thought some percussive footwork, which is Carli’s speciality, would fit the story. She ended up doing percussion on pretty much the whole record, somehow able to make sense of Clair’s warped sense of rhythm, speeding up and slowing down all the time.

Outside of folk, who or what influences the music you make?

We found quickly that we have really similar taste. We both spent a lot of time listening to the same things in the 90s, trip-hop, PJ Harvey, Radiohead, Nick Cave, we’re both huge fans of flamenco and Sufi music. A kind of paradoxical mix of simplicity and complexity. Hypnotic rhythms and intense emotion, expressing the personal, the political and the mystical all at once.

We have about three dozen songs on rotation, and we’re always tinkering with them. Often it takes years for everything to come together. They always have multiple starting points, which magnetise out of different processes: melodic phrases Clair finds during improvisation; percussion riffs and vocal harmonies from Carli’s experimentation processes; lyrics from ongoing archival research on specific themes we’re into.

What initially inspired your stripped back approach?

We’re both interested in distillation, what you can do with the bare minimum. Both of us made decisions early on in life to develop skills like overtone singing and body percussion that take a lot of time and commitment, but don’t need any special context or equipment to practice. Skills you carry with you everywhere. Then after we met in Prague, we were having one of those ‘looming apocalypse’ conversations, reflecting on how precarious everything is, how easily we can lose everything. That’s something you feel acutely as a migrant, as a traveller. We got the idea of a kind of futuristic folk music, a post-apocalyptic, post-electronic form after all the machines have stopped.

You’ve reworked traditional songs from Britain, Ireland, Australia and Russia; how do you go about sourcing material?

Black Raven came to us because Clair was researching folk songs from around the world about crows, magpies, ravens. Birds we’re drawn to. We feel like the songs choose us, to be honest. We’re constantly looking around, especially in traditions connected to our family histories, and then some songs will just grab you, beyond any sense of reason. They get under your skin, bring tears to your eyes although you can’t understand why exactly. Then we hunt for every version we can find in broadsheet ballad archives, old song books, to get a sense of the landscape of the song, the spaces between the versions.

What’s the thinking behind your debut, This Is Broken Folk?

In a way to introduce ‘broken folk’ as a concept, but it really began as a kind of note making. We had a lot of songs on the go. We wanted to document where our process was in the simplest possible form, materials we had honed in a live context but were already expanding beyond. We set some very specific restrictions: three takes maximum, no overdubs, everything recorded together in a live room. We kept to that except for in Ben Hall, which went a bit psychedelic.

It’s a term you use to describe your music, could you expand on what you mean by broken folk?

Something that resists stereotypical boundaries and binaries between time periods, spaces, cultures. A kind of constellation, but opposed to the kind of homogenous free appropriation sometimes implied by World Music. We certainly don’t feel free to use anything and everything, regardless of its history. We want to reveal multiple fractured histories, to expose the broken fictions that supposedly pure nationalist traditions are founded on.

Music or art is perhaps the only way to make a statement, or at least the kind of complicated, conflicted, broken statement we’d want to make. Maybe a better word would be something like ‘worldbuilding’. We’re trying to describe reality, but also to change it. To channel something, open something up and share it with people in order to transform it.

What’s your take on folk music in the UK currently?

Too often folk just means some dude with an acoustic guitar – twangly sentimentalism – but there’s actually loads of incredible stuff being made at the moment, especially under the banners of folk horror and New Weird Britain. Thriving folk festivals, lots of new releases, strange approaches coming out of decades of freak folk, psych folk, queer folk, alt-folk, anti-folk… Trying to connect with things underneath normality.

How important do you think it is that the folk scene evolves and embraces change?

Much of our ‘traditional folk music’ is just anonymous pop music from previous centuries. Everything changes; the problem is when people fool themselves into thinking late Victorian forms are ‘original’, rather than snapshots of a moment in time. Yesteryear’s revisionist historical re-enactment project, mistaken for a timeless state of grace. We actually think our music is very traditional, would be very understandable to folk in previous eras. We don’t believe in progress mythology. Folk is changing and growing, but the messages, rhythms and melodies are beyond time: as relevant as ever.

Currently we’re completely DIY; we’re looking to expand our team a little bit, to link up with the right agencies, publishers, labels maybe. People who are passionate about our approach. Beyond the music scene, we work in galleries as a kind of live art or performance installation, and we love the theatre context. We gave a performance lecture on resonance and space in the V&A, which was exciting. We’d like to play to bigger houses, travel more, meet more audiences, design more objects. We want to join forces with people who do things we don’t – there’s amazing work in the contemporary circus scene, for example, and we love providing soundscapes to activate artworks, museum collections… We’re also now applying for funding to get back in the studio again; we’ve got lots more material to release and we’d like to experiment with orchestration a bit more.

This is Broken Folk is out 31 October and will be available to purchase here.