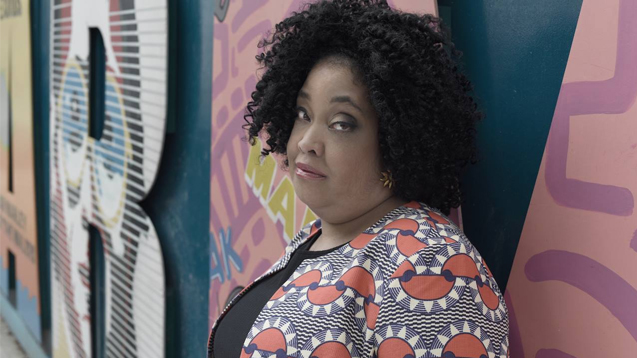 ‘I don’t dress up my real life, I say it how it is’ - soul singer Lizzie Emeh, the first solo artist with a learning disability to release a UK-wide album, on her career and new music…

‘I don’t dress up my real life, I say it how it is’ says soul singer Lizzie Emeh on her music. It’s the heart of the appeal of this pioneering artist, the first with a learning disability to release a UK-wide album (Loud and Proud) back in 2009.

She went on to win two national awards for her achievements in music, performing alongside Beverley Knight at the opening ceremony of the London 2012 Paralympic Games and collaborating with a number of top musicians. Her studio partners include contemporary string composer Bobbie Gardner, Grace Jones, musical director Charles Stuart, jazz-legend Courtney Pine, drummer Robert Fordjour and Tongue Fu keyboard player Arthur Lea. With new music now on the way, we caught up with Lizzie to find out more about her songwriting approaches and how it feels to make music industry history…

Through my nan. She was a jazz and blues singer and taught me everything I needed to know about music. I remember her turning around and saying to me ‘I’m only putting you on the starting blocks, because I know what you’re going to achieve’. From there it became a love, then a passion. I knew I wanted to sing from a very young age.

What/who inspired you to start writing your own music and singing?

Singing, definitely my nan, but writing music it was Pino Frumiento, co-founder of arts organisation Heart n Soul I’m a part of. He has written over fifty five songs. When I first started at Heart n Soul I saw Pino perform and asked him if that was someone else’s music he was performing. He told me it was his own and said 'I just do it, it’s in my blood, you can do it too, it’s in your blood as well'. So then I started writing. The first track I wrote was Loud and Proud.

Where do you look for inspiration when writing your songs?

Daily life, people around me, things that happen to me, that’s what’s makes my music so powerful and raw. I don’t dress up my real life, I say it how it is.

It was a brilliant achievement for me, but it felt like it was a landmark for people with learning disabilities. I gave them a voice and I feel I’m still giving them a voice right now.

I think things are getting better. It felt like when I started in the music industry you had to tick the boxes. You still do in a way, but in other ways you don’t have to because people have opened up their minds and become more accepting to people who are different and have a different perspective on life. That’s really refreshing. I do also think some credit has to go to Susan Boyle who opened up some doors as you could clearly see she had a disability.

You’ve worked with a number of different artists - what makes for a great musical collaboration?

The way I connect with the music is important and do it in different ways with different collaborators. So Rikki Jodelko brings out the quirky side of me, Mark Williams brings out my soul and Arthur Lea brings out the funk.

One of the most gifted people I’ve ever worked with is Bobbie Jane Gardner - she put together the whole arrangement for my track Waiting, then I added the lyrics and Bobbie completed it by composing some string sections. We came up with a beautiful piece and it’s my favourite track.

Your new LP See Me is scheduled for release this year - could you explain a little about making the record? How did it come about and what was the thinking behind it?

Tragedy struck in 2012 when my mum passed away. I really wanted to flip it on its head and turn something that was really sad into something that was positive and powerful. One person who helped me do this was my collaborator Arthur Lea. He said ‘how do you feel about your mum?’. I said ‘she can see me from above’ and that was the start of the album.

What role have Heart n Soul played in your music?

My god! My nan gave me the starting blocks as to what I could become, but Heart n Soul gave me a huge lifeline, they got me started helping me believe in myself and what I could achieve. I would like to thank Mark Williams (artistic director of Heart n Soul) because he’s never given up on me. He’s given me the determination to strive on to what I’m doing right now.

Who would you love to work with?

Stevie Wonder. he’s one of my ultimate musicians, I love him. He’s a total legend. I would have loved to work with Amy Winehouse, she was so soulful. On Back to Black she absorbed every single word that she was singing, there was so much meaning, she didn’t throw one word away. Prince is another person I would have loved to have worked with. When he wrote When Doves Cry it was genius. I’ll miss him. He has left such a legacy for the younger generation.

Have you got any advice for new songwriters/recording artists?

Lizzie Emeh's new EP My Baboo is available now. She will play a special performance at The Albany in Deptford on 13 May.