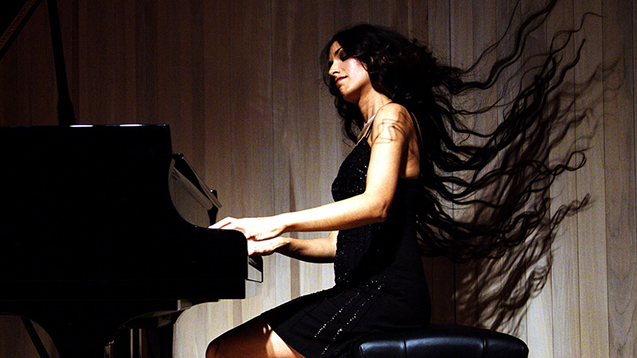 'We’re the only two female jazz instrumentalists who’ve been nominated which is rather shameful' - jazz star Zoe Rahman chats the Mercurys and more...

It's been 16 years since Zoe Rahman burst onto the jazz scene with her debut album The Cynic.

Since then she's scooped up a Mercury Prize nomination, won the prestigious UK Parliamentary Jazz Award and picked up a MOBO Award for Best Jazz Act – all of which have helped to cement her place as one of the brightest stars in the contemporary jazz world.

Described by the Observer as 'a remarkable pianist by any standard', her dynamic and distinctive style is deeply rooted in jazz and has seen her become a highly sought-after musician, working with the likes of jazz bassist George Mraz, Jazz Warriors founder Courtney Pine and Jerry Dammers’ Spatial AKA Orchestra.

Now, six albums in, she's about to embark upon Band on the Wall and Brighter Sound's third acclaimed Jazz Directors Series residency, where she's written and arranged material to play with nine emerging jazz musicians as part of The Inner City Ensemble.

Speaking about working with fresh talent, she says: 'All of us who are in jazz love the music and we just want it to carry on for as long as possible, so I think it’s important to encourage the younger generation to come forward'.

We chat to Zoe ahead of the shows to find out what she thinks about the current jazz scene and why the industry needs to encourage more diversity...

What were you listening to growing up and what led you to becoming a musician?

My older sister plays piano and my other siblings all play so there was just always music around. My parents bought a piano when I was about four and we just went for lessons. They had no intention of us becoming musicians, we just fell into it really.

Listening-wise, my dad was into Nat King Cole and my parents listened to classical music. I didn’t really get into jazz until I went to a gig in my teens. We grew up in Chichester, West Sussex so it wasn’t like London where you can go to jazz clubs every night of the week! I remember when I was a teenager, going to a jazz gig, and just thinking it was amazing seeing the atmosphere on stage. I didn’t really understand how they were making this music and improvising, it was a completely different thing to the classical music that I’d played up until that point.

You’re playing the Jazz Directors Series with nine emerging jazz musicians. What drew you to that?

Well firstly I was asked and I couldn’t really turn it down! It’s an amazing opportunity. Terence Blanchard did the first one and Chris Potter did the second, so what an honour to even be asked to follow in their footsteps.

I know the tuba player, Hannah, from a long time ago. I used to teach at her school – I saw her playing a school concert when she was about 12 and I just thought this girl sounds amazing, and now I’m gonna play with her. It’s nice to see the progression of young musicians. It’s easy for people to play when they're younger but not have that journey into a professional career; things can fall by the wayside. If I see people when they’re young, I try and encourage them.

What's the current climate for emerging jazz musicians? Is it important to you to support new artists?

It’s very different from when I was starting out. I never came across anything like this, what an amazing opportunity. They get four gigs in a row, which even for a gigging jazz musician is hard to come by, and also they're gonna be rehearsing for a few days before that so it’s quite an intense period of work, in terms of their learning. And also for me, an opportunity to work with new musicians who I’ve never worked with before.

All of us who are in jazz love the music and we just want it to carry on for as long as possible, so I think it’s important to encourage the younger generation to come forward and just give them as many opportunities as they can get.

Do you feel that there is enough diversity in the jazz and classical worlds?

The first question I ask [when considering a project], other than can I bring my children, is about the make-up of the band. I really want to work with women, especially in jazz. In contrast to the classical world, women are really underrepresented in the media and in the music you see on the television. But actually there are a lot of female musicians around who don’t necessarily have the profile or they haven’t been spoken about in the same way that musicians have throughout history. I just want to do something to represent what’s actually going on out there at the moment. I’ve got six out of 10 musicians including myself who are women.

I’m half Bengali and half English so I wanted people, again, who represented that diversity within Britain. When I was growing up, I didn’t know anyone who looked like me, I didn’t know anyone from a mixed background. Again in the jazz world, it’s not necessarily represented. I wanted to encourage people from diverse backgrounds to come and be involved in this project. There were so many strong candidates. So it’s a very diverse line up which I’m really pleased with.


How has your British and Bengali heritage influenced your music?

Not at all initially. Growing up, we didn’t really listen to Bengali music. All my family on that side lived in Bengal so I only knew my dad. Only in the last 10 years or so, I’ve been listening and absorbing that music and trying to do my own take on it. The melodies are amazing, you don’t even have to understand the language to get a sense of the feel of what the music’s saying. I will be playing a Bengali piece that I arranged for an album called Where Rivers Meet, with The Inner City Ensemble.

What challenges did you face trying to break into the industry?

I did classical music so I went to Oxford and from there I came to London. I didn’t know anybody, I didn’t even have a piano for years. So it wasn’t like I suddenly came out of college and went straight into something. There weren’t those networks for me. I was doing all kinds of odd jobs, stuff outside of music. It was really hard. I used to buy copies of Loot and scour the pages to see if anybody needed a piano player! I eventually went to Berklee College in Boston for a short while, had some amazing piano lessons with JoAnne Brackeen. That’s the main reason I went really. I just had to try and find my own way. I wanted to form my own band and do my own band so I just had to forge ahead.


Do you think jazz is thriving?

I think it’s always been there, whether it’s been written about or not. I watched the Mercury Prize the other day. Laura Jurd, the trumpet player – her band [Dinosaur] sounded great. She was nominated this year. I was nominated 11 years ago and I’ve waited all that time for another woman jazz instrumentalist to be nominated, I’m so pleased for her. The Mercurys are 25 years old now and we’re the only two women in the jazz instrumentalists who’ve been nominated which is rather shameful.

The sound of my children crying. No, I didn’t say that – laughing,  I meant laughing! My son is a musician, he plays drums and we spend a lot of time making up songs. There are certain albums that really capture his imagination so I listen to what he’s listening to. Weirdly, Bruno Mars. Probably not what you’re expecting!

What’s coming up next for you?

I’m just about to go to Scotland tomorrow to play one solo and a duo with a great Scottish sax player, Laura McDonald. Obviously the big project with Bands On The Wall and Brighter Sound, and then a few solo gigs for my album, Dreamland, at London Jazz Festival and Cambridge Jazz Festival in November. The main thing is just finishing the arrangements for this project. It’s quite nice now I know who the musicians.

Zoe and The Inner City Ensemble play Manchester's Band on the Wall from 15 to 22 October.
Features
Back to top