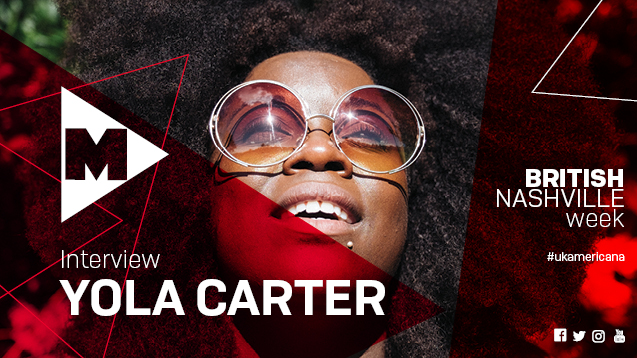 Bristol country soul sensation Yola Carter is on the cusp of blowing up in 2017. But it’s success that has been hard won.

After some years working as a voice for hire with the likes of Massive Attack, Nitin Sawhney and Bugz in the Attic, it’s over the last 12 months that’s she’s struck out alone armed with a classy arsenal of songs and a jaw dropping voice.

It’s a move which now appears to be paying dividends after last year’s PRS Foundation funded trip to Americana Fest. Alongside William the Conqueror and Robert Vincent, Yola helped put British artists on the map with a series of breathtaking and hotly praised live performances.

Her debut EP Orphan Offering is the only release thus far but acts as a calling card for her soul-baring songs, lying somewhere between country and Americana. Ahead of what should be a big year, we caught up with Yola to find out more about her country roots and how she’s dismantling the genre’s stereotypes...

How did you first get embroiled in music?

Well I started singing from my first word. My attraction to music was eclectic and not governed by genre or personal identity. I just enjoyed the vast majority of music and wanted to be immersed in it. But when I started singing the songs I liked, I noticed that certain things came more naturally and felt more right. My trill and how I naturally saw a song in terms of delivery was naturally towards the Americana umbrella.

How did you get into country and Americana music?

It was a long slog. I started out in a rock band and suggested we could be a country rock band. The first reaction was we’ve spent a lot money on electric guitars. We’re not playing acoustics’.

It took a lot of effort to sell the idea of country as there was an fear association with it when I started out. Achey Breaky Heart and Deliverance were the only reference points in the UK - and they weren’t positive.

So how did it become more fashionable?

I had to fight my way through a wall of things you were supposed to be into as a young girl of colour to get to this music. It means I’ve spent a lot of time doing things I didn’t like to go to where I am now. Thank god for the Coen Brothers’ film O Brother Where Art Thou? making sense of what I was trying to get across.

You can see the connections between all of the genres through the blues, the gospel to country so that helps. It's like in the Band's film, The Last Waltz with The Staples Sisters, Muddy Waters, Neil Young, Bob Dylan and Joni Mitchell.

Where did this solo project begin?

Well our first gig was at the Americana Music Association Awards in January 2016. Then within nine months we were in Nashville and the buzz had reached fever pitch. Before that gig, none of the band had played together. Then we get to September and we’re getting rave reviews in the broadsheets.

How was your trip to Nashville for the Americana Fest?

We went over with a great group of people – William the Conqueror and Robert Vincent – so were all hanging out over there. Part of your mind thinks beforehand is it going to go down well to be British but it’s been like that for decades. American and British musicians and songwriters have always been bouncing off each other, interpreting, taking sounds back … it’s all part of a special musical relationship.

Why is Nashville important to you?

It’s massively important to break in Nashville, not just because of the significance of the genre but because of the size of the place. It’s so visibly growing you can almost hear it. Every time you turn your back, new residential areas appear out of nowhere.

But being able to perform in Nashville in what is the beating heart of country was massive for me. It’s more than you can hope for - the quality of players, the quality of music. Playing there is huge because it’s a music city. Every major international label and publisher have representation there.

Are you heading back out there?

I’ve become a tease basically, I’ve been asked to go and play and it’s now a matter of making that viable. I’ll be heading back out to conferences and to play shows. Again, I’m surprised to have been booked at the end of year one. The record is coming out in the US in March.

I’ll be slowly infiltrating these from then hopefully – first with the music, then with my actual self and the players I’ve accrued.

Have you any advice for new and emerging artists?

And also you’ve got enough for loads of releases and you won’t be writing under duress. This is important to make sure you’re ahead of your own musical curve. You can be trying to find a producer, doing co-writes while you release to get a foothold. You’ve got an ability to keep rolling.

Plus concepts for albums if certain songs don’t fit together. Volume really helps you.

You should also apply to do a showcase at Americana Music Association UK awards. That’ll help. I was advised to do it. Americana is in its infancy which means it’s an open door for new artists…

Visit m-magazine.co.uk/tag/country-and-americana for more interviews and profile pieces with a whole host of UK country and Americana artists.