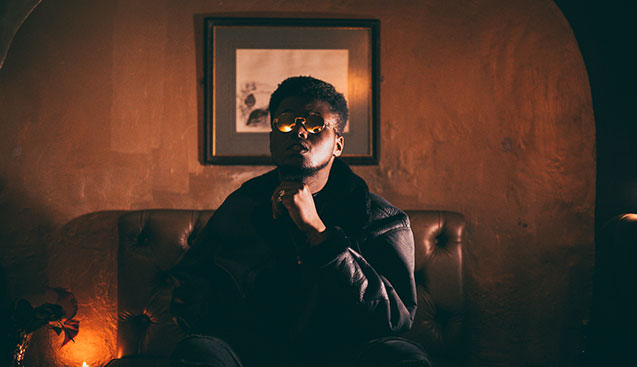 Neo-soul newcomer XamVolo is a game-changing all-rounder who's getting serious props on both sides of the pond. Here, he opens up his musical mind and lets us have a peek inside...

Neo-soul newcomer XamVolo hasn’t got many releases behind him just yet, but according to tastemakers on both sides of the pond, he clearly belongs in the same genepool as Frank Ocean and Anderson .Paak.

As a self-taught musical polymath, it follows that his production is on a whole other level too, with analogue samples of Thelonious Monk and vinyl glitch underpinning his stark studio wizardry.

In little over a year, the Liverpool-based, London-born artist has won plaudits from Annie Mac, Mistajam and Gilles Peterson, has racked up hundreds of thousands of streams, and supported Paloma Faith on her recent arena tour.

Not bad for a tenderfoot, who’s only just releasing his debut EP, A Damn Fine Spectacle, this Friday.

How did you find your way into music-making?

When I was about 14 one of my friends gave me some studio software and I was really fascinated by it. I spent most of my time on in, making instrumentals and things for other people. That was in about 2007, then in 2012 I started trying to write songs for myself and put them out there.

Have you ever had any formal music training?

No, none at school or anything. Due to this lack of training I never had any personal, public or professional aspirations, I just found music a great way to spend my free time and I really wanted to see how deep I could get into it.

When did things get more serious?

I moved to uni to study architecture and met a lot of people who helped me turn this into a more legitimate operation. I really like the production side, I like writing songs, I like crafting things – I see it as a problem-solving exercise instead of an expression. I want to sculpt sound in a certain way – how do I do that? How do I go about conveying a certain idea or executing a concept? That’s what I’m interested in.

How did you first find your voice?

When it comes to singing, I started mainly because people around me were doing it, and I wanted to be involved in all of that. But I never took it seriously. In 2004 and 2005 I was really into early grime and I thought that’s the music I wanted to make. Then I listened to more rap, early RnB, and soul. I discovered people like Erykah Badu and found all that really interesting.

I knew nothing about chords but I found the progressions really interesting – and eventually I found jazz. I realised that a lot of the standout pop, RnB and soul tracks of the early 2000s had a big jazz influence, so I started to research the genre and decided that was the direction I wanted to take things in.

Which particular elements of jazz resonate with you the most?

The swing and the chord progressions – they are the main things I take from jazz. It’s actually what jazz takes from blues. It’s that soulful presentation with added mad chords. I don’t get obsessed with trying to find the dissonance though, I’m not immersed in music theory.

How does your sound come together?

I treat most instruments as the same thing essentially. So, if I use a guitar in a track, it’s not to make it sound like rock music – or even a guitar necessarily – it’s just that I feel its presence or texture is necessary. There’s a certain energy which can only be achieved by using that sound. I feel the same about my vocals – my voice is just one part of the wider instrumental picture. Sometimes I sink it right underneath other things that may need more attention.

Other than that, it’s interesting to mish-mash a bunch of genres and techniques...

You use a lot of great old samples in your music – what draws you to those textures?

I’ve always wanted to use samples, but since I’ve had the chance to legitimately do so, I’ve found it’s not always the easiest thing to do. I honestly don’t know how people like Kanye West use samples in every track because it’s such a hassle! They’re really expensive to clear. But I grew up around hip-hop, J Dilla, and all that sampling/rearranging/mosaic approach to music-making – using what’s around for your own sound.

What’s the thinking behind your new EP?

It’s part of a wider arc – the EP will be followed by a bigger project. It’s the first foray into that world. I think the first time I got into an artist who does really elaborate things with their concepts was Janelle Monae’s The ArchAndroid. The futurism concept based on Metropolis was so interesting – and since then I knew I had to build my music around concepts.

The theme throughout this one and the next is desire. I’ve used the symbol of a hive containing a black honey, and it grants whatever you want, eventually. It’s through the eyes of a girl who could build a better life if she dives into the hive.

I’ve started writing more stuff already, just to keep me sharp. I had to stop producing and songwriting for a while and I learned that you have to keep it up. I’m working on some remixes and also loads of live shows. It’s a completely different thing to the studio.