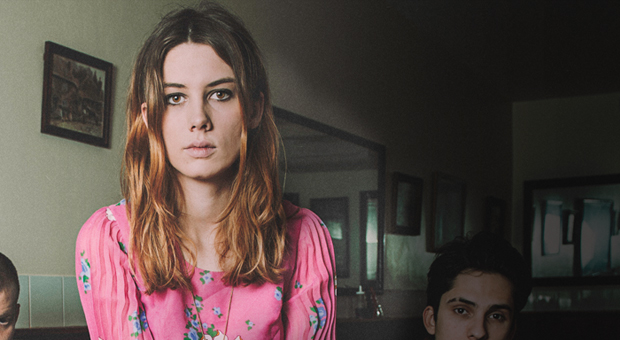 We quiz Wolf Alice frontwoman Ellie Rowsell on the band’s rise to the top and hopes for 2015...

Since first plugging their amps in together back in 2010, London outfit Wolf Alice have enjoyed a rapidly spiralling career trajectory.

Led by vocalist and songwriter Ellie Rowsell, Wolf Alice have garnered a reputation as an incendiary live act with an impassioned mix of grungy guitars and more introspective, acoustic moments. Their debut EP Creature Songs was unleashed in May 2014 and led to a snowball of hype, culminating in a nomination for the BBC Sound of 2015 and tip from the Launched at Red Bull TV series.

We caught up with frontwoman Ellie to get her thoughts on songwriting, dealing with hype and forthcoming debut album, My Love is Cool…

The first time I remember thinking I wanted to be in a band was when I started going to see this American group called the Black Lips. They’re from Atlanta. I loved their songs but knew it wasn’t extremely technical. It made me think I could play in a band.

Had you already started playing at this point?

I had picked up guitars but to play the Beatles, or the softer Green Days songs. I’d always sung and written songs but they were quite girly, piano ballads. Nothing I’d ever perceive as cool.

How did Wolf Alice form?

I had written a few songs and entered this local songwriter competition. I had to perform as part of the contest and realised that I couldn’t play the guitar and sing very well at the same time. I really enjoyed it but thought I’d need to start working with other people. I found Joff who had moved to London to study and started doing open MIC nights. We played them for a year or two, then decided to start a proper band. I’d known Joel and Theo since I was younger. They offered to help us with some shows and it just really worked.

What was your first big break as a four piece?

We were asked to play a showcase by Fake DIY. They put on new band shows at the Old Blue Last which is a place every band seems to play many times in their career. I remember playing at pubs in Camden and Islington but had, believe it or not, dreamed of playing at the Old Blue Last. We got invited to do this show and there was a queue round the block. We still couldn’t play our instruments very well and had six songs. It was really exciting.

How does the songwriting process work?

Sometimes someone will have written a whole song and made a demo of it, then send it round and we’ll add our own seasoning to it. On other times, we’ll just be jamming and it’ll come from there. We’ll form it into a song, or someone will have a riff and we’ll write the melody over that. We’re all pretty creative and they come in different ways.

Debut album My Love is Cool is set for a June release - what are your hopes for the record?

If you wait a while to release your first album, you do build some expectation for yourself. I hope people react to it positively. You don’t want your expectations to be too high but as long as you’re happy, then that’s cool.

You recently played a live gig for Converse Rubber Tracks and were tipped by the Launched at Red Bull TV series - what are your thoughts on working with brands?

It is a cool thing – anyone who doesn’t do it is depriving themselves. Maybe it isn’t the rock n roll ethos as they are big corporate events. But the fact of the matter is Red Bull provide access to new music. They rent out their studios and do competitions for young bands. That’s really important for new acts starting off. They are heavily involved in creative things like sport and music and if they’re going to provide a platform for us to do our thing, then why would I not take that.

Rubber Tracks offers recording time to new bands who don’t have a record label to help them get in the studio. That’s only a good thing in my eyes. It’s really hard for bands to make money from their music in this day and age, except playing events where they can take money for playing. If I was to turn that down, that’s turning down money I could invest in a next album. I do believe you have to pick and choose brands wisely, especially when you’re unsure of the politics of a certain brand. It’s about the benefits outweighing the cons.

You’re on tour at the moment - which shows have been the best?

We did a good show in Hamburg. Sometimes with support tours they’re a bit sterile as these aren’t your fans. But with that one, we let loose a bit. There’s something about the way European crowds are up for it. Today we’re in Switzerland and have been ice skating.

What does the rest of the year involve for you?

We’re going to America for our first headline tour which will be a pretty big deal for us. Then we’re going on a headline tour around the UK with a London show at Shepherd’s Bush Empire which is insane. Our album comes out, then we’ll be in the festival season.

If you could work with anybody, who would it be?

Justin Timberlake. I loved him when I was younger. And his stuff has always been good. I’d like to work with someone pop to see what they would do with our music.

Wolf Alice’s debut album My Love is Cool will be released on 22 June. Check out the video for Giant Peach below.