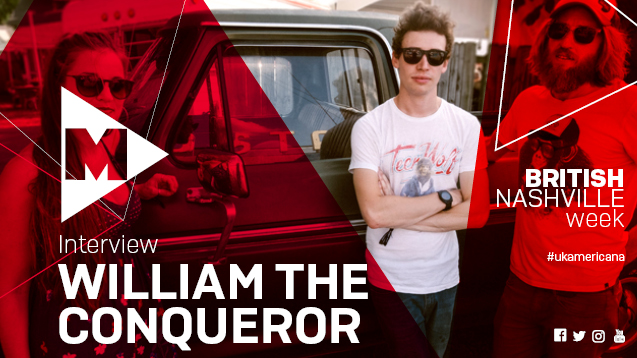 We quiz British Americana artist William the Conqueror on his love for music and why his current guise came from ‘some one night stand of an idea that turned out to be love’...

‘William the Conqueror is not what you might expect’ is the cryptic tag line surrounding Newport music maker Ruarri Joseph’s latest guise.

Ruarri has been plying his wares as a songwriter for some years but this latest persona is a renewed focus of his abilities. Smudging the lines between folk, blues and Americana, William’s is a gritty authentic sound which has won over fans on both sides of the Atlantic.

A PRS Foundation funded trip to the Americana Fest in Nashville in 2016 alongside Yola Carter and Robert Vincent was followed by a great performance at this year’s Americana Music Association UK awards. Now he’s gearing up to release his debut LP via Loose Music and, ahead of this, we quizzed Ruarri on his music and why this new persona came from ‘some one night stand of an idea that turned out to be love’…

How did you first get into music? Was there a song or person who kicked off your musical journey?

I fell in. It spoke to me as a kid and opened a door in my head I didn’t know was there. I don’t have a memory from my childhood that isn’t soundtracked by my Dad’s obsession with Bob Dylan. I guess I was around seven or eight when Oh Mercy came out and that got me good. Man In The Long Black Coat, Ring Them Bells, Most of the Time stuck out then but all the other albums too. Knocking On Heaven’s Door I knew and then a school friend played me the Guns n’ Roses version and something clicked for me about what songs were and what they could be and mean to you.

At about 11 years old I started playing guitar. A friend at school had tried to write a song so I thought I’d give it a go and then I just became obsessed. I used to design album sleeves with fake band names and tracks and then go about trying to write the songs to fit the titles. It all hit around the time of some domestic turbulence at home and songs were just the place to go and hide away from it all.

Where did the idea for the William the Conqueror persona come from?

Some one night stand of an idea that turned out to be love.

Where do you write your songs? Have you got a particular place or space where you find yourself at your most creative?

I have a garage in the garden that’s pretty easy to go get lost in.  There are no windows or much in the way of heating but I like the isolation.

You went over to Nashville in 2016 to the Americana Fest - could you explain a little about your experiences over there?  How was your music received?

I loved every minute. The musical talent in that place is something else.  Very inspiring. We went down pretty good I reckon. Over there the scene seemed tipped on the country side of the scales so we certainly stuck out. Americana is as much an ethos as a genre, all about roots music and vibe and keeping reality in check which is exactly what William is about, just a little heavier.

In terms of a career boost, what did the trip to Nashville do for you?

Who knows? There’s not exactly a check list you can keep an eye on to see how your career’s going, there’s so much that needs to fall into place. We went, we played, they cheered, some people called us, some people didn’t but as an experience it was awesome and for our willingness to keep going, a massive boost.

What are your thoughts on the current health of the Americana/Country music scenes in the UK?

I think it’s exciting it seems to be getting some attention. As I said before, Americana as I’m experiencing it doesn’t necessarily feel like a genre though. It’s more like an alternative to the mainstream. No musician or artist I’ve met at any number of the Americana events we’ve been at has been anything other than an absolute devotee to the joy of making music, be it in someone’s house or at a sold out theatre. It’s a community.

It’d help if it wasn’t about trying to pin it down to meaning one thing. It should be allowed to breathe and be malleable and that be the thing that attracts people. As I said, it’s an alternative to the mainstream. There are loads of challenges. For it to grow you need more awareness of it and if you want more awareness in this 100 mile an hour five-second-attention-span culture, then you need to give it a clear and quickly understandable label. The minute you do that, it’s not what it was and you’re back to square one trying to explain to people that The War On Drugs AND Mary Chapin Carpenter can be Americana.

You’ve recently signed a deal with Loose Music and an album is due out in the spring. What is it about and what are your hopes for it?

‘What’s it about’ is a tricky one to nail down. I could say it’s about obsession or childhood or disappointment and destiny but that could mean a million things a million ways. I look forward to hearing what others think. The recording process was a strange one in that we didn’t necessarily have a plan. We were off the radar playing gigs in places that only had a chalk board to advertise and we weren’t looking to "make it" or do anything other than enjoy playing the music in between our other musical jobs. At some point we took a trip to see Colin Macleod on the Isle of Lewis, kind of with the intention of making a record but a hurricane killed the power and we ended up watching surf movies on fading laptops by candlelight most of the time. And then one day we set up some stuff in my garage and made a racket for a few days (proud disturbers of the peace!) and listened back thinking it was way more exciting than the other stuff we were doing. So we thought we’d share it and here we are.

I’m loving some of our label associates right now, having half inched a stack of vinyl when we signed. Treetop Flyers, Handsome Family, The Felice Brothers are all getting much airtime in our house right now. I’m excited for the new Father John Misty record and Slow Dive have their first album in 20 years this year on the same day as ours. Everyone needs to get on board the Yola Carter train too. A magnificent force of nature, the voice, the songs, the attitude. Great stuff.

Have you got any advice for new and emerging artists?

It looks like a clean slate’s about to get scribbled on.

Visit williamtheconqueror.net to find out more.