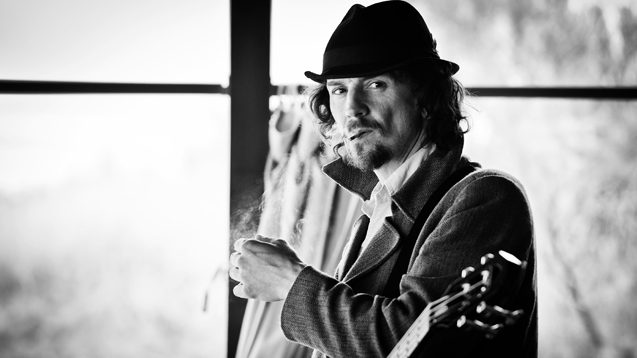 Poet, musician and book maker Will Carruthers on Spaceman 3, Spiritualized, working on a building site and his new book, Playing the Bass with Three Left Hands...

‘I had to put a nice cover on the book because the contents are so disgraceful.’

Poet, musician and book maker Will Carruthers is reflecting ruefully on his new Faber published work, Playing the Bass With Three Left Hands, a tale of a musical life well-lived.

As bassist in Spacemen 3, Spiritualized and Spectrum, Will was in some of the most influential rock groups of the eighties and nineties. Having more recently played with the Brian Jonestown Massacre and Icelandic band Dead Skeletons, he’s decided to give loud music a break due to hearing problems. Now he’s focusing on writing, occasional solo concerts and readings.

This new autobiographical tome traces his wobbly waltz of the last 30 years, through feedback-filled music via work on building sites to his current vocation as a Berlin-based book maker.

As he says numerous times during our interview his ‘career’ certainly sounds ‘unlikely’. But then he’s an unlikely character, a passionate raconteur, spilling over with wit, words, and tall tales. Here Will tells us more about his work, his life and why blind songbirds don’t sing any sweeter…

I got a guitar when I was 15. There was a fella from Manchester at our school who taught me to play Pretty Vacant by the Sex Pistols.

I did a few gigs with a garage punk band, then ended up joining Spaceman 3 - that was my third gig. Playing with Spaceman 3 down at Dingwalls in Camden in ’88.

I could play Batman so I knew I could play one note for 20 minutes fairly safely. It’s like meditation. When everything around you is chaotic, I’d play that one note and just hang onto it, like a drowning man holding onto a stick in a rough ocean.

Was music something you’d envisioned yourself doing as a career at any point?

I love the word career - if it means out of control, going down hill, rapidly, then it’s a fucking great description. There were moments when I envisioned I’d be able to make a life for myself from it. And it definitely kept me alive in different ways. I didn’t think of it as a career but it certainly made me feel better.

It was a very powerful musical force. Rugby is a small town so we all knew each other as people with similar interests.

By the time I joined, they’d made two albums and had been playing together for ages. They had a well-established live set. In the studio, they were writing great songs, they had me in and they liked my bass playing. They were always open to whatever I brought to the table.

We just used to sit around and get stoned and listened to a hugely diverse mixture of music. Gospel, blues and soul, psyche and weird, oddball stuff - you couldn’t define all of it.

What happened with the band?

We split up when we were just about to tour America. People seem to focus on the split but it’s more interesting to talk about why we decided to stay together for so long. That’s a really interesting point. The split wouldn’t have been so bad if there had been no fame, money or prestige involved. But we stayed together as it was going somewhere. That pressure to succeed made the break up worse - it’s like two people staying together for their kids but they fucking hate each other.

Was the music made inside it more exciting and vital because of that pressure?

You mean did that make it better? Because musicians have to suffer? If that’s the case, then you should take all musicians, and torture them - then they’ll make great music. There’s an old Victorian story about someone who blinded songbirds, as they believed that blind songbirds sang sweeter. I don’t think this is the case. I think birds sing sweeter when they’re in the trees. If you have to go outside to listen to them, it’s probably good for you too. Having said that, a lot of music does seem to come from difficult places, just look at Detroit. Music means a lot to you when you’ve got fuck all so maybe music means more in difficult times.

You left the band, then worked on a building site?

I was in debt and I had a year of fairly stressful tours and recording. I was like fuck it, got a job as a labourer. It was a good paid detox. Did that, then joined Spiritualised. So did that, made Laser Guided Melodies, their first album. I did a lot of touring, then found myself in a similar situation with debt, so went back to the building site. It’s always been a balancing act between artistic endeavour and hard labour.

When people ask if I’ve got any advice for aspiring musicians, I always say ‘get yourself a fucking trade’. People think I’m joking but to have that flexible work was great, to be able to say towards the end of a tour - ‘I’ll come round and decorate your flat next week’. It made it easier to sustain myself as a musician.

When did you release your own solo music?

I had a few years off, then I went rambling round the country, kipped in hedges for a while, got some fresh air, listened to the songbirds. I was helping my friend move house and we were on a roundabout in Newcastle when we were rammed by a meat pie van. It was a horse drawn meat pie van and I ended up with about £3,000 of compensation. So I bought a studio, an eight track thing. Set this up in my bedroom, made an album, did a website and sold them directly.

I was listening to a lot of folk music at that time. After years of searing feedback, I needed something more gentle and pastoral. I did another album in the same way, which I made in an abandoned building in Leicester. It all sounds very unlikely doesn't it? I’m not making it up. My favourite bit is the meat pie van.

How did the book come together?

I wrote it in two months in Zagreb. I was touring with Spectrum a few years ago and an Icelandic band called Dead Skeletons. They were passing me between the other like a baton in a relay race. I did that and ended up with tinnitus. It wouldn’t go away. I got overly sensitive to sound so had to head away from the live band thing. I made a book of poems by hand. I tore all the ligaments in my knee Icelandic wrestling with the drummer from the Dead Skeletons. So I couldn’t go back to the building site. Instead I thought about a change of career, thought I’d try being a poet and that might change my fortunes.

So I wrote it in two months. Sometimes you just have to get on with it and do it.

You just need to do it. You’re never going to find the ideal situation. None of this music was made in ideal situations. You just have to have that drive to do it. That’s when the best stuff comes. It’s not when you have a great studio at your disposal. You think about things differently when you haven’t got all the tools you want - you improvise and through that you can end up with something beautiful. The limitations you have can make your music and creations flower.

Playing the Bass with Three Left Hands is available now.